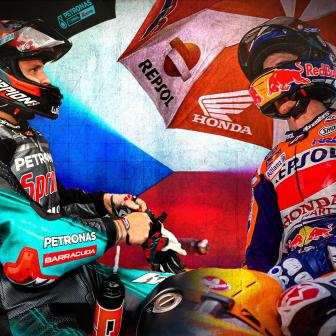 As Marquez returns, there are also two more riders suffering through the pain barrier, although both managed to finish the Andalucia GP. 2016 Czech GP winner Cal Crutchlow (LCR Honda Castrol), with more recovery time for his scaphoid, will want to be able to go the distance a little better, and Team Suzuki Ecstar’s Alex Rins, with a dislocated shoulder compounded by a small fracture, will be aiming to take a step forward too. The Spaniard took a hard-grafted tenth place last time out, but after Suzuki’s incredible preseason showing he’ll want to recover more ground and score as quickly as possible. The good news for the Hamamatsu Factory in the second race in Jerez though was Joan Mir, with the number 36 putting a crash in the season opener behind him to take fifth and get some reward for his speed. He’ll be even more keen to conquer Brno too, as the Czech track was the scene of his huge crash in testing last season that sidelined him for two races.