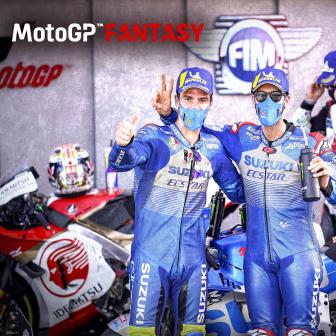 The 2020 MotoGP™ Championship came to a brilliant conclusion last weekend as Miguel Oliveira (Red Bull KTM Tech 3) sealed victory at his home Grand Prix in style. It was the first time in eight years we saw a two-wheeled Portuguese GP and it debuted a brand new rollercoaster of a track in the Algarve International Circuit, and it didn’t disappoint as it already has us salivating at the prospect of returning to Portimao next season.

Both the Moto2™ and Moto3™ titles were decided, and while the premier class crown was already pre-determined, everything was still to play for in MotoGP™ Fantasy, and as the curtain has come down on another fantastic season of racing, we have a new Champion.

Support for this video player will be discontinued soon.

An unprecedented season, that at times nobody thought would take place, delivered one of the most memorable MotoGP™ years in history

The battle went down to the wire but rising above their peers to become the 2020 MotoGP™ Fantasy Champion was Rusty Ross (Ross Racing 58), with the Australian based manager taking 122.5 points in the final GP to see him move above Federico F. (Quartararismo) to first place in the MotoGP™ Official League. His decision to include Miguel Oliveira and Jack Miller (Pramac Racing) in the final round proved decisive as the pair took P1 and P2 respectively, and not only can they bask in the glory of being the best of the bunch, but he will also take home a signed 2019 Marc Marquez replica MotoGP™ Helmet.

All is not lost for our runner up, however, as he goes home with an Official MotoGP™ Tissot watch while our third-place finisher Damien Duteis (Sandwich Team) will be sent a pair of Official MotoGP™ Oakley Glasses. The Top Three will also receive a Motul MC Care Package. A huge congratulations to all three managers who have now set the benchmark ahead of 2021.

Riders of the Championship

There are no surprises for guessing who tops the MotoGP™ Fantasy stats, as new World Champion Joan Mir’s (Team Suzuki Ecstar) 311 points and average of 22.2 points per Grand Prix was unmatched by any other rider. Alex Rins couldn’t make it a Suzuki one-two in the Championship, but he could do so here as he joins his teammate at the top of the stats board thanks to 306 points and an average of 21.9. Rounding out the Top Three is Andrea Dovizioso (Ducati Team) with the Italian finishing the season with 284 points and an average of 20.3 as he bids farewell to the grid for next season.

Support for this video player will be discontinued soon.

Ducati took home the Constructor’s Championship for the first time since 2007 so it is no surprise to see them top of the pile here with 353.5 points, though they only sit third in podium places with nine. Yamaha and Suzuki both have 11 podium finishes each, but it is the Iwata factory who take second place thanks to 335.5 points from their four riders while KTM complete the Top Three, with their eight podium places capping what has been a remarkable rise in fortunes for the Austrian factory. Despite having a World Champion in their midst, Suzuki can only take fourth place in the MotoGP™ Fantasy standings.