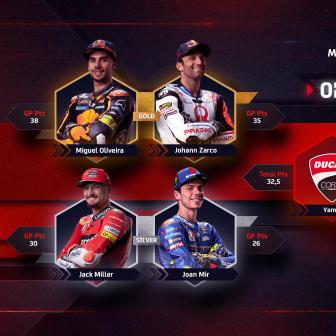 The KTM man upset the odds in Barcelona to take the win at the Catalan GP, while some familiar favourites never got going

Miguel Oliveira romped home to victory at Round 7 of the 2021 MotoGP™ World Championship, taking his first win of the season in the process. The Red Bull KTM Factory Racing rider held off Pramac Racing’s Johann Zarco to take the chequered flag in front of a crowd of 20,000 people.

The fans certainly made a welcome return to the grandstands, but we bet that a few of them may have been cursing their luck as the final result threw up a few surprises in MotoGP™ Fantasy. The Portuguese rider collected the most points of anybody over the weekend, but yet he didn’t even crack the top 5 of most owned riders in the game.

Who joined Oliveira in the weekend’s Dream Team?

As mentioned, Sunday’s race victor collected a total of 38 points throughout the weekend, and nobody else bettered that total. Despite sitting eighth on the list of most owned riders, 1,991 players had the foresight to bring him in ahead of the deadline and were handsomely rewarded for their faith in the KTM man.

Oliveira’s closest rival on-track is also the closest rider to him here, with Zarco’s P3 to P2 performance seeing him earn 35 points in total. A fourth second place of the year saw the Frenchman close the gap to Championship leader Fabio Quartararo (Monster Energy Yamaha MotoGP), but his wait for a premier class win goes on.

Joining his Ducati counterpart in the Dream Team is Jack Miller (Ducati Lenovo Team), who crossed the line fourth at the weekend but stood on the podium following a penalty handed to Quartararo. It’s the third time this season the Aussie finished among the rostrum places, with this effort seeing him collect a total of 30 points. Miller remains the third most owned rider in the game, but 2,387 MotoGP™ Fantasy managers will be kicking themselves as they contrived to make him the second highest traded out rider.

Completing the Dream Team is Joan Mir (Team Suzuki Ecstar). The Mallorcan was another to profit off of a penalty given to Quartararo to move up to P4 from a P10 start. As has become the norm, the World Champion began an attack on the podium from deep on the grid, meaning he picked up plenty of Advanced Grid Position points along the way to a healthy 26 points.

Who was the top constructor?

Yamaha were the most traded in manufacturer this weekend, and were fancied to do well in Barcelona. However, the performance of the GP21s meant that Ducati were the top constructors with 32.5 points. That was 6.5 more than Suzuki, and 8 more than KTM.

What happened to the race favourites?

As mentioned, Yamaha were expected to do well at Circuit de Barcelona-Catalunya, yet, not a single YZR-M1 ended up on the podium. Fabio Quartararo is MotoGP™ Fantasy’s most owned player but only collected 20 points over the weekend. Having encountered a number of race difficulties, he was handed two separate three-second penalties which saw him drop to sixth overall. As a result, his factory Yamaha teammate Maverick Viñales was the best finisher from the Iwate factory in P5, but he was the fifth most traded out rider.

Petronas Yamaha’s Franco Morbidelli was the most traded in rider, having shown some excellent pace and rhythm throughout Free Practice. That continued in qualifying as he took fourth on the grid, but a poor start in the race meant he dropped down to tenth by the end of the first lap, something he never recovered from as he wound up crossing the finish line in ninth place and collecting just 13 fantasy points for the round.

How many 300V Motul boosts were played this weekend?

When is the next round of MotoGP™ Fantasy?

Next up is Round 8 of the World Championship for the Liqui Moly Motorrad German GP at the Sachsenring, and even though we’ve just come off a double in Italy and Spain, we are already counting down the days for this one.