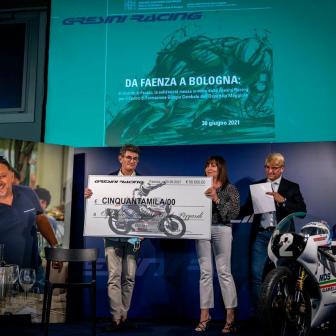 “But he – who for me was not only an ill patient but also a friend with whom I was sharing the passion for MotoGP – has taught us more than any of our efforts could. He taught us to remember that beyond pain, beyond sufferance, there was his team: his family, his employees, his riders… He, until his last breath, was asking about them. He was talking about them. To know that they wanted to leave us a tangible sign of all the good things he did here is helping us overcome the unsuccessful use of medical science on Fausto, as well as on all the patients we were unable to save during this pandemic. The charity effort started by Fausto and his family is a true relief for the wounds inflicted by Covid on us healthcare professionals. Our thank you will not be enough compared to your wonderfully curing gesture.”

PAOLO BORDON, GENERAL MANAGER AZIENDA USL DI BOLOGNA: “Stories such as the one of Fausto Gresini paint a picture of a healthcare system that looks after and is being looked after by the institutions of the territory, who wish to actively contribute to its growth and innovation. As the Local Healthcare Unit company of Bologna, we are involved on many fronts in order to ensure the best care to the ill patients, while trying to also look after everyone at their sides. Despite being painfully affected by the loss of Fausto, today we can’t be but doubly grateful to his family and to all the MotoGP fan club who wanted to take part in the memory of the beloved friend and/or colleague, while donating a breath of oxygen to the Training Centre “Gambale” of the Maggiore Hospital.”