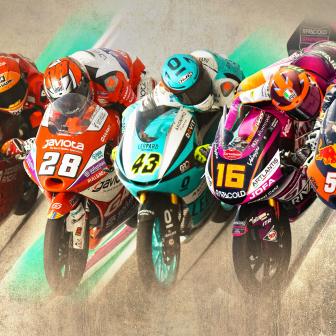 Who are the stars of the lightweight class who could make a leap in performance in the second half of 2021?

Throughout the first half of 2021, some Moto3 ™ World Championship stars, ️like leader Pedro Acosta (Red Bull KTM Ajo), have shone more than others. Other riders have fought for respectable positions without achieving the expected result. Here, we look at 5 riders who, could build on the potential shown in races 1 to 9 and achieve the results their potential merits.

2021 for the Indonesian Racing Gresini Moto3 rider started with good results in qualifying: 4th and 3rd in the two rounds held at the Losail International Circuit, but in both races he was unable to cross the finish line, opening the season with two consecutive zeroes.

Once in Europe, he again qualified on the front row in Portimao, but could obtain only 2 points. If in the first 3 rounds he had proven to be competitive in qualifying, at the Red Bull Spanish GP he went through Q1 before Q2, where he recorded the second fastest time. Then his progress continued by taking the podium for the first time in 2021, a third place that renewed his confidence.

The following rounds in France, Italy, Barcelona, ​​Sachsenring and Assen were full of ups and downs. At Le Mans he was out of the points. At Mugello he started from the second row but finished 15th, while at Montmeló he converted a strong qualifying to second place in the race. In Germany he starred in an epic comeback: starting 20th, he just missed out on the podium by finishing 4th. At the Dutch TT, Jeremy took the first pole of his career and finished the race in the Top 10.

Jeremy will visit several tracks he is unfamiliar with in the second half of the season. But he can aspire to get strong positions on circuits where he already achieved good results last year such as Misano, Aragón and Valencia. In addition, with the return to Portimao at the end of the year, the ’52’ will also have a new opportunity to climb to the highest step of the podium. Don’t rule it out!

Could the Italian stop the 16-year-old from making Grand Prix history in the Algarve?

After nearly a full career spent racing KTMs, the move to the Rivacold Snipers Team Honda was much more natural than even Migno himself could imagine. At the second round in Qatar, after going through Q1, he set the sixth fastest time in qualifying and was about to get on the podium. In Portimao came the first pole of the year and the first podium, a third place that allowed him to occupy fifth place in the championship. Arriving in Jerez, he consolidated his pace with another front row and fourth place, and at the next round, at Le Mans, he managed another pole before struggling to 11th place in the rain. At this point he sat as high as third in the World Championship.

Arriving at his home race at Mugello charged with enthusiasm and determined to consolidate his consistency, Migno encountered his first major setback. A crash on the first lap did not allow him to finish his home race and a week later, in Catalunya, he suffered a fall, another zero and a significant setback in the World Championship.

Fifth place in Germany was an improvement, but he failed to back that up at Assen, where the Italian scored his third zero in 4 races, falling to 10th in the championship. With future visits to circuits such as the Red Bull Ring, Misano, Valencia and Austin, Migno can regain the necessary concentration by seeing the results he obtained on these tracks in the past. After a 5-week break, Andrea will return recharged as he seeks to regain the consistency that he showed in the first part of the season.

The Gaviota GASGAS Aspar Team rookie has shown remarkable consistency in the first part of the season in his first year in the Moto3 ™ World Championship. In the first Grand Prix of the season he immediately secured a front row start and then finished the race in seventh place and less than a second behind the winner. The following week, back on the Losail track, the Spanish rookie did even better in the race by coming home sixth.

Are these riders the future of MotoGP™? Watch the last Moto3™ laps of 2019 as Sergio Garcia dueled with Artigas for victory in Valencia

The Portuguese roller coaster was a bit more complicated and the Mallorcan finished out of the points. In the next two rounds, at Jerez and Le Mans, he was out of the Top 10, setting the 11th and 14th fastest times in the race, adding even more points to his tally. The Mugello round was the toughest for him yet. After qualifying in 29th, he regained some positions in the race, but could not get past 17th. Determined to redeem himself in Catalunya, he  was on course for a podium finish before he crashed out on the last lap. In the two rounds at the Sachsenring and the Dutch TT, the rookie was 10th and 12th, respectively, placing 15th overall in the World Championship.

The young Spanish rider will have to face new circuits such as the Circuit of the Americas in Austin and the Sepang International Circuit in Malaysia but, given the solidity he has shown in the first half of the season by consistently finishing in the points, he could be a constant presence in the Top 5 places. Without doubt, it would be an exciting preview of what could come in 2022.

It was another royal rumble in the lightweight class at the Catalan GP. Catch the final few minutes of it here!

The 4 retirements and a race outside the points do not reflect the full potential of a rookie determined to stand out in the colors of Leopard Racing. The Spanish rider began his adventure in the lightweight class of the 2021 World Championship with three consecutive zeroes registered in the double of Losail and in Portimao, sometimes without having any responsibility. But at Jerez he recovered with an encouraging ninth place and then improved again at Le Mans, where he finished 7th.

At Mugello he stayed out of the points zone. Despite having recovered some positions in the race, the Spaniard was cut off in 16th place, and the following week in Catalonia he suffered his fourth retirement of the season. He then redeemed himself in Germany and Assen, where he achieved two ninth places and resumed his rise in the general classification.

Of course, the Catalan lacks experience and qualifying is still his weak point, but being in a team that has taken several riders to the world title in recent years, Artigas has what it takes to get himself into the leading positions. Will he get his first podium this year?

The young Turkish star’s second full season in the Moto3 ™ World Championship has on major highlight: his first podium finish at the Circuit de Barcelona-Catalunya. Logically, the Red Bull KTM Tech3 rider’s hope is to conquer many more in the future.

After being left out of Q2 only in the first two Grand Prix of the season, in Qatar, the ’53’ has a seventh best qualifying time in Portimao as the best result in ‘qualifying’ and in the race we have seen him often fighting for top positions. He has sometimes been penalised him for a lack of experience and other times for bad luck, but the young Turk has shown that he knows how to fight with the fastest.

Last year at the Red Bull Ring, he was on his way to a breakthrough result when he crashed out. In 2021 there will be two rounds on the Austrian track and Öncü could give us a pleasant surprise after a key summer break for everyone. To find out what these 5 drivers – and the rest of the light class grid – will be capable of, we will have to wait for them to return to action. That makes the Michelin® Grand Prix of Styria from the 5th to 8th of August a must-watch.