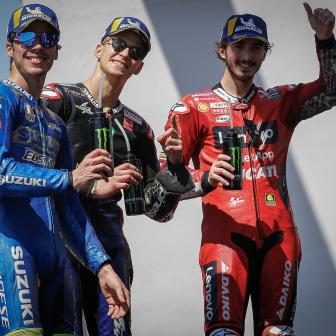 Italy’s Bagnaia and Spain’s Mir are tied on 134 points as the paddock descends on the British GP, some 47 points behind Quartararo. The Austrian GP saw both riders reel in Quartararo after the latter picked up P7 in one of the most dramatic races we’ve ever seen. Now, the title chasers are hoping to cut El Diablo’s advantage further. However, it won’t be easy on a track that – on paper and according to the history books – suits the Yamaha down to the ground.

Bagnaia: “Yeah for sure I’m happy. I recovered more points like this than in fully dry conditions because Fabio was in trouble with rain tyres. I was close to fighting for a win but in any case I am happy because I did my best race in MotoGP I think. I was setting my pace and feeling comfortable. It was better the second race, the first one we had a bit of bad luck with the restart but the second one we managed to be fast enough to stay in front.

“I’m really confident to ride this track, it’s one of my favourites. I really like the layout and our bike maybe suits good, maybe not like a Yamaha but we will try to be fast enough to stay with Fabio because we really need to recover more points. Still were 47 and if Fabio wants to enjoy the Championship more maybe we can fight until the finish, it’s better.”

Mir: “Yes well last race was a little bit crazy. I would say that in Austria the feelings were nice in both weekends, the race in the second GP was unexpectedly difficult but finally we could be really close to the podium which was our goal. Now we come to this track which as you say Alex was strong here in 2019, he was able to win, Suzuki got two victories in the modern era and this is for some reason.

Quartararo: “Two years ago was one corner on Sunday but this is one of my favourite tracks on the MotoGP bike, the Yamaha suits the track really well and its just a matter of going out tomorrow morning, enjoying straight away, having a good time. I hope we get good weather and let’s see.”

A full house awaits at the British GP

A few weeks ago, the British MotoGP™ fans were heading to Silverstone without a home rider to cheer on. Now they have two, as well as seeing Valentino Rossi (Petronas Yamaha SRT) compete in his final Grand Prix in Great Britain. Tickets have sold out for the weekend and it’s safe to say both Crutchlow and debutant Dixon are buzzing to race in front of the ever-enthusiastic British crowds.

Crutchlow: “Yeah it’s great, it’s great to come to Silverstone. I never thought I’d be racing a Silverstone GP again after I retired so to come back, already we missed last year with was disappointing, but to come back this weekend with Monster Energy Yamaha is a privilege.

“It’s a privilege to ride Silverstone anyway, and then now with a full crowd it’s going to be entertaining for everybody. I’m looking forward to it. Riding in Austria was not easy after being so long off the bike, but to come this weekend here, maybe in a little bit better of a situation after the last two races, I look forward to seeing what we can do.”

Dixon: “Yeah it’s obviously fantastic and obviously thanks to Petronas for giving me the opportunity to ride the MotoGP bike. To do it at home is pretty special, if anyone could do there debut I think they would do it at home so yeah, I cant wait. Like you say we’re going to have a full house, and Silverstone seems to suit the Yamaha in the past. I can’t wait, it’s definitely going to be a massive learning curve, but I’m ready to take it on and see what we can do.”

Mir, Binder and Martin: riding a MotoGP™ bike at Silverstone for the first time

2020 Champion Mir, as strange as it sounds, has never raced his GSX-RR at Silverstone. The Spaniard was injured for the British GP in 2019 and with the paddock having not visited Northamptonshire in 2020, the number 36 joins Binder and Martin in facing the fast and furious layout for the first time on a MotoGP™ bike. Are they nervous? Of course not. All three riders are relishing the challenge.

Mir: “No I’m not nervous. I think that the important thing is once you get the feeling, is to put the feeling here. Not the track. I haven’t rode a bike here since ’18 and for sure this will be a bit difficult in the first laps. But if you have a great feeling and you know, we did a lot of races this year and I think I’m in good form, but I think I will be able to adapt quickly on this track. The track is quite long, wide, difficult to find the line, but yeah. It’s important to find it as quick as possible.”

Binder: “I mean we’ve all been here a few times. It’s always a bit of a challenge I find at a new track on the MotoGP bike, no matter how many times you look through the data, I always find it completely different to how I remember. The big goal for me is to be comfortable straight away and not start too far down the order like I have done many times when I come to a circuit for the first time on a GP bike. It’s a special track, last time I was here I really really enjoyed it and I’m looking forward to riding the big bike around here for sure.”

Martin: “I would be so confident if the race was in Austria again but we come to a new track and I need to be focused and start from zero. I don’t know how it will be, so just try to find a good feeling with the bike. I will give my 100% as always, it won’t be easy but I’ll try my best.

“From my side it will be the same as always, because I’ve come to the track with MotoGP so I’m not nervous, I’m ready and rearing to go.”