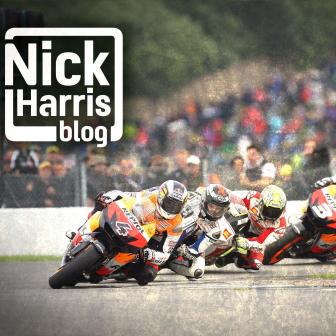 When the rain arrived, it arrived in true British style. Big wet heavy drops of liquid falling out of the leaden sky soaking the Silverstone tarmac in seconds. The wet patriotic British crowd had come to support Sheene but soon realised from underneath their umbrellas that Manship’s gamble could bring home success. At the end of lap 13 Roberts twisted and pulled into the pits realising if he had any chance of winning, he had to change tyres. No jumping from one Yamaha to other in those days but just getting down to the business of changing wheels. The Cal Carruthers led Robert’s team were experts. They had started the season with just one Yamaha and were experienced at the complicated and precise procedure. This was no modern Formula One wheel change, but they still managed it in two and half minutes. Others such as Sheene’s Suzuki team were less experienced and took up to seven minutes.