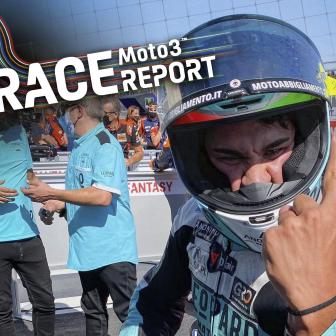 A third win of the season came the Italian’s way in Aragon as we witness Championship drama aplenty; Öncü and Sasaki pick up podiums

Polesitter Darryn Binder (Petronas Sprinta Racing) launched away from the line well and grabbed the holeshot into Turn 1, with Garcia making a fast start from P4 to make his way up to second by the time the riders had raced through Sector 1. Garcia then looked to take the lead down into Turn 12, however, the Spaniard got it a bit wrong and ran wide, dropping to P4. Gabriel Rodrigo (Indonesian Racing Gresini Moto3) took the lead heading down the back straight for the first time and led over the line, with all riders safely negotiating Lap 1.

Acosta was battling away inside the top 10, as he and Rodrigo made contact on Lap 3 at Turn 9. Filip Salač (CarXpert PrüstelGP) crashed out of the top 10 at Turn 12, rider ok, as we witnessed a very frantic opening few laps. Acosta and Garcia were both scrapping inside the top five, but they had plenty of hungry riders for company. Öncü looked comfortable holding the P1 baton, but further back in the lead group, Rodrigo suffered a highside at the final corner. The Argentine was out of the race, thankfully up on his feet, as British GP winner Romano Fenati (Sterilgarda Max Racing Team) had to take to the gravel to avoid contact.

At half race distance, Xavier Artigas (Leopard Racing) took his turn leading, Öncü soon returned to the lead though as we saw an 11-rider lead group form. Garcia vs Acosta was in full flow, the two title rivals were squabbling in P4 and P5, with both Leopard Racing Hondas a constant threat. Izan Guevara (Gaviota GASGAS Aspar Team), Sasaki, Andrea Migno (Rivacold Snipers Team) and Binder were locked together, with Öncü still leading with four laps to go.

Then, with four laps to go, huge drama. At Turn 5, Acosta and Artigas were down and out of the race. Acosta dived up the inside of the Leopard rider and tucked the front, causing the Championship leader to hit Artigas’ rear wheel. Now, all eyes were on Garcia. How much damage could the GASGAS star inflict on his rival’s title lead? Garcia was P3 with two laps to go as Foggia passed Öncü at Turn 1, before Garcia climbed to P2 at Turn 8. However, Öncü was straight back up the inside at Turn 12.

Final lap time, Foggia led Öncü, Garcia and Guevara. Contact at Turn 2 between teammates Garcia and Guevara occurred as the Spaniards connected three times halfway through the lap, as Öncü carved up the inside at Turn 5 to take the lead. Yet more Championship drama was about to unfold though. In an incredibly fierce final lap, Garcia was third but was late on the brakes into Turn 12. It turned out to be too late, as the Spaniard crashed unhurt. This left Öncü leading Foggia for the race win, but on the back straight, Foggia unleashed his Honda power and drafted past the Turkish rider, held it around the final two corners to claim victory. Öncü missed out on a maiden victory by just 0.041s, as Sasaki made it two Tech3 riders on the rostrum with a brilliant P3.

As the dust settles on a scintillating Moto3™ race, Acosta’s lead in the Championship remains unchanged. 46 points are his advantage over Garcia, with Foggia now just 12 adrift of second place with his victory. Next up: Misano. What will we witness at Round 14?

Where to watch MotoGP™ eSport Global Series Round 3

Get set for a “very important” two-day Misano Test