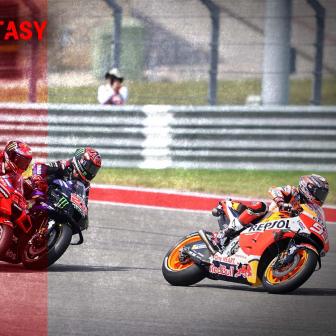 It was a short trip across the pond to the United States, but it saw Marc Marquez regain his King of COTA crown after the Repsol Honda rider put on an exhibition in Austin. It also proved a fruitful journey for Fabio Quartararo (Monster Energy Yamaha MotoGP) whose second-placed finish saw him put one hand on the 2021 MotoGP™ Championship trophy. With the excitement from the weekend now done and dusted, it gives us time to reflect on the lay of the land, and how it all played out in MotoGP™ Fantasy.

Who made The Americas GP Dream team?

Just like Sunday’s race, Marquez is head and shoulders above the competition. A combination of victory, a first front row start of the season, a couple of overtakes and setting the race’s fastest lap give the eight-time World Champion an impressive haul of 42 points from the action, making him the star rider in The Americas GP Dream Team.

Beginning to make a habit of charging through the field, Enea Bastianini (Avintia Esponsorama) makes a second consecutive appearance in the MotoGP™ Dream Team after collecting a tidy 30 points. Starting from P16, the rookie sensation rose through the field to take another top six finish, with the vast majority of his points earned through the ten grid positions gained. It’s P6, P3, P6 for the in-form Italian, and with a trip to Misano up next, he looks like a strong differential option for gamers.

Quartararo takes his customary place on the Dream Team, though this time as a silver rider. It was P2 to P2 for the title leader, meaning he collected a total of 29 points from the weekend. It was a more than satisfactory run out from the number 20, as he opened up a 52-point lead in the Championship race with just three Grands Prix to go.

The rider he holds that advantage over is Francesco Bagnaia and the Italian completes the Dream Team from Austin. The Ducati ace stole the show in qualifying to take a hat-trick of poles, but he couldn’t make it a hat-trick of victories come race time, instead having to settle for a seventh podium of the season after crossing the line third. It all resulted in the Italian taking home 26 points for MotoGP™ Fantasy managers who entrusted him in their teams.

Which constructor should I have picked?

As has often been the case this season, Ducati took home the largest haul of all the manufacturers, with the efforts of Bagnaia and Jorge Martin (Pramac Racing) seeing them collect 28 points in total. If you had Honda as your constructors’ choice, then they would have brought home 26.5 points for your team while Yamaha are third for the weekend with 20.

In total, The Americas GP Dream Team would have earned you 127.5 points and cost $16.6 million.

How many Motul 300V Boosts were used?

2948 managers doubled the points of one of their riders after they applied one of their Motul 300V boosts in Austin.

Can I still win prizes?

Of course, every week there are some amazing prizes up for grabs with the weekly winner receiving tickets to a Grand Prix in 2022. Monthly and seasonal VideoPass subscriptions can also be won so you don’t miss a second of the action, while there are also Motul Product Packs handed out to each winner!

If you win the season outright, you will win a signed replica 2020 World Champion Joan Mir helmet, while there are also Tissot watches and Oakley products awarded to the game’s best managers.