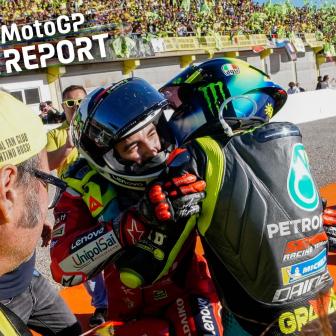 Polesitter Martin grabbed the holeshot into Turn 1 as fourth place Mir got a great start to get the better of Bagnaia, with Miller second. Rossi made a good start and was up a place into P9, World Champion Fabio Quartararo (Monster Energy Yamaha MotoGP) was P6. Miller then dived up the inside of Martin at Turn 1 on Lap 2 to take the lead, but it was short-lived. Martin and Mir cut through on Lap 2, Miller down to third, then it was fourth, then fifth – the Australian going backwards after briefly leading.

The Suzukis were charging – hard. Mir was harassing Martin, before Pecco then used the GP21’s superior grunt to take P2 off the former Champion. Alex Rins (Team Suzuki Ecstar) then snuck past Mir at Turn 6 on Lap 3, as the top four – Martin, Bagnaia, Rins and Mir – started to create a gap to now fifth place Quartararo. Miller was down to P6 and seemingly struggling in the early stages.

The race then settled as the front runners held station, but Martin, Bagnaia and Rins were now 0.7s ahead of Mir. After a few laps of following the World Champion, Miller was back through on Quartararo and up to P5, as Rins set the fastest lap of the race. However, at Turn 6 on Lap 11 of 27, Rins was down. The Spaniard tucked the front of his GSX-RR, handing teammate Mir third. Rossi was now 10th, 0.6s down on Enea Bastianini (Avintia Esponsorama) who, as things stood, was losing out on the Rookie of the Year crown with Martin leading.

Bagnaia was swarming all over the back of Martin and with 12 laps to go, at Turn 14, Pecco pounded. Now, with some clear air, what could the Italian do? The fastest lap was slammed in by Bagnaia, a 1:31.042, hammer well and truly down. His mentor Rossi was still 10th with 11 laps to go, but VR46 Academy’s first World Champion and fellow Yamaha star Franco Morbidelli (Monster Energy Yamaha MotoGP) right behind him. Further back, Petrucci was 17th in his farewell appearance.

Martin was not letting Pecco pull clear. On two consecutive laps, Martin was quicker than Bagnaia, and a second or so behind, Miller grabbed P3 off Mir at Turn 2. It was a Ducati 1-2-3 with eight laps to go, history was on the cards for the Bologna factory. And Miller wasn’t done yet. Miller was 1.3s back when he passed Mir, but with five laps to go, Miller was just 0.7s off Martin’s tailpipes.

Two laps to go in 2021. Pecco was 0.8s clear of Martin, now, baring trouble for Pecco, it was a battle for second. Miller was closer than ever to Martin, but the rookie was holding firm. Unable to make a move, Miller couldn’t quite make it a factory Ducati 1-2 as Bagnaia crossed the line to win for a fourth time in 2021, with Martin clinching the Rookie of the Year crown with a P2 – his fourth podium of the season. Miller, in third, helps Ducati make history with their first 1-2-3 in MotoGP™ with his fifth rostrum. In addition, Bagnaia’s P1 and Miller’s P3 helps Ducati take the Teams’ Championship, adding to their Constructors’ crown.

The Doctor’s last dance ends with a fantastic P10

Mir held onto P4 by just 0.2s in the end as Quartararo claims P5 to cap off a title-winning season for the Frenchman. Johann Zarco (Pramac Racing) was P6, Brad Binder (Red Bull KTM Factory Racing) was P7, with Bastianini’s P8 not good enough for the Rookie of the Year title – nine points split the Italian and Martin in the end. Aleix Espargaro (Aprilia Racing Team Gresini) struggled in the latter stages and slipped to P9, finishing one place ahead of The Doctor.

Valentino Rossi took P10, where he started, to bow out in style. There aren’t enough superlatives to describe the Italian’s glistening Grand Prix career, as one of the world’s biggest sporting icons bids a fond farewell to the sport he loves – and the sport that loves him. Grazie Vale, from millions of fans around the globe.

Morbidelli crossed the line less than a second away from Rossi as the Italian now aims to get fully fit for 2022, Andrea Dovizioso (Petronas Yamaha SRT) had a good final weekend of the season to finish in P12, as Alex Marquez (LCR Honda Castrol), Miguel Oliveira (Red Bull KTM Factory Racing) and WorldSBK-bound Iker Lecuona (Tech3 KTM Factory Racing) take home the final points of 2021.

Takaaki Nakagami (LCR Honda Idemitsu) joined Rins in suffering a DNF in Valencia, the Japanese rider was perfectly ok after his Turn 6 crash.

And that, as they say, is a wrap. The curtain comes down on 2021, as we say ciao to the icon that is Valentino Rossi. The number 46 will be missed immensely on and off track in 2022 and beyond, but MotoGP™ couldn’t be in a better place. The next generation is here, Rossi’s legacy will live on with his VR46 Academy and new MotoGP™ team, as Yamaha and Quartararo aim to defend their title against a whole host of unbelievable bikes and riders. What a year.