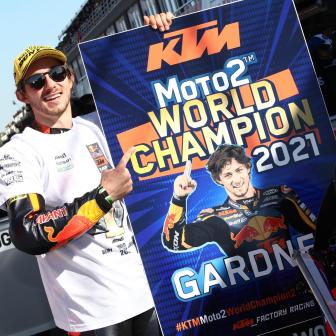 Until 2021, in the 73 seasons of Grand Prix motorcycle racing, there was only one father and son duo that had won World Championships: Kenny Roberts and Kenny Roberts Jr. However, in Valencia, Remy Gardner was crowned Moto2™ World Champion, seeing the Australian replicate his father Wayne’s success in becoming a World Champion.

Dubbed as ‘King Kenny’, it’s fair to say the American changed the motorcycle racing game when he made his full-time Grand Prix debut with Yamaha in 1978, winning the 500cc title in his first attempt. He was the first American to claim the 500cc World Championship, and Roberts retained his title in both 1979 and 1980 before retiring at the end of the 1983 season, where he finished second to fellow American Freddie Spencer.

In 2000, Kenny Roberts Jr won the 500cc title with Suzuki, handing the Hamamatsu factory their first Kevin Schwantz in 1993. Roberts Jr ended his career with an impressive 22 podiums, eight of those being victories, including a final one at the famous 2006 Portuguese GP, where he fought with Valentino Rossi, eventual winner Tony Elias and Colin Edwards.

Plying his trade in arguably one of the toughest eras in Grand Prix motorcycle racing’s history, Wayne Gardner earned 52 podiums and 18 victories racing against the likes of Wayne Rainey, Randy Mamola, Kevin Schwantz, Eddie Lawson, Freddie Spencer and Mick Doohan. Gardner won the 1987 500cc title, with injuries plaguing his riding in the years that followed. Retiring in 1992, Gardner took an emotional final win at Donington Park, and as the first Australian 500cc World Champion, he opened motorcycle racing up to a much wider audience Down Under and is cherished by a generation of fans.

Wayne’s son, Remy, got his first taste of full-time World Championship action in 2015 in Moto3™, but he would have to wait until the 2019 Argentinian GP for his first podium. Four more podiums – including a first win in Portimao – were collected by the Australian, before a move to Red Bull KTM Ajo was on the cards for 2021. The rest, as they say, is history. Gardner became a World Champion and now looks forward to joining compatriot Jack Miller in MotoGP™.

An illustrious quartet. Only a select few can say they’ve become a World Champion, but having a father and son to both do it is even rarer. Who will be next to join the Roberts’ and Gardner’s?