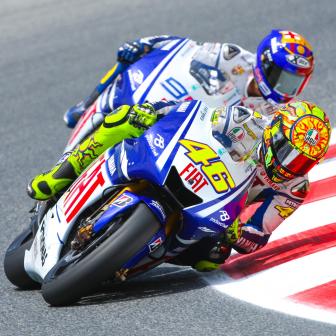 Rossi vs Lorenzo, Doohan vs Criville and more – have a look at some classic teammate battles for the World Championship

In motorsport, they say your first rival is your teammate. Same team, same equipment, equal playing field. So we thought it would be good to take a little trip down memory lane to have a look at some Grand Prix rivalries between riders competing inside the same garage.

The Repsol Honda Team pairing enjoyed many a great battle during their time together as teammates at HRC. The 1996 Spanish Grand Prix, Criville’s home race at the Circuito de Jerez-Angel Nieto, was a major flashpoint. At the final corner on the last lap, Criville and Doohan went head-to-head for victory, but the Spaniard’s race ended with him highsiding. Spielberg and Brno also hosted a couple of classics between the duo.

The pair enjoyed many duels during their stint together at @HRC_MotoGP!

Jerez produced the biggest flashpoint 25 years ago, while Brno and Spielberg also played host to classics later that season! ???? pic.twitter.com/lxXNKiH3ue

One of the great 250cc showdowns was an all Tech3 Racing affair in 2000 between Olivier Jacque and Shinya Nakano. Victory at the final race of the season, held at Australia’s classic Phillip Island, handed Jacque the title, as the teammates finished 0.014s apart across the line – and just seven points apart in the overall standings.

The 2007 125cc World Championship fight between Gabor Talmacsi and Hector Faubel was one of the classic lightweight class battles. It all came down to a Valencia final day showdown. Faubel won the race but second place for Talmacsi was enough to see the Hungarian win the title, as the top five crossed the line just 0.8s apart. Talmacsi claimed the crown by five points over teammate Faubel.

A simply unforgettable rivalry between two of MotoGP™’s greats. Factory Yamaha teammates Valentino Rossi and Jorge Lorenzo were just at the beginning of their premier class scrap, with the most famous head-to-head in 2009 coming at the Catalan GP. Final corner, last lap, after a race-long fight, Rossi came out on top. The Doctor won the title later that year, with Lorenzo second.

Marc VDS teammates Tito Rabat and Mika Kallio fought it out for the Moto2™ World Championship title in 2014. Between them, they claimed 10 victories and four 1-2s, as Rabat became a World Champion for the first time.

Red Bull KTM Ajo’s magical pairing of Remy Gardner and Raul Fernandez dominated the intermediate class World Championship in 2021. 13 wins were collected between the two of them, rookie Fernandez picking up eight of those, but it was Australia’s Gardner who won the title at the final race of the season in Valencia. Both now get ready to be teammates again, this time at Tech3 KTM Factory Racing in MotoGP™.

Where will the next teammate title tussle come from? Here’s hoping there’s plenty more on the way very soon.