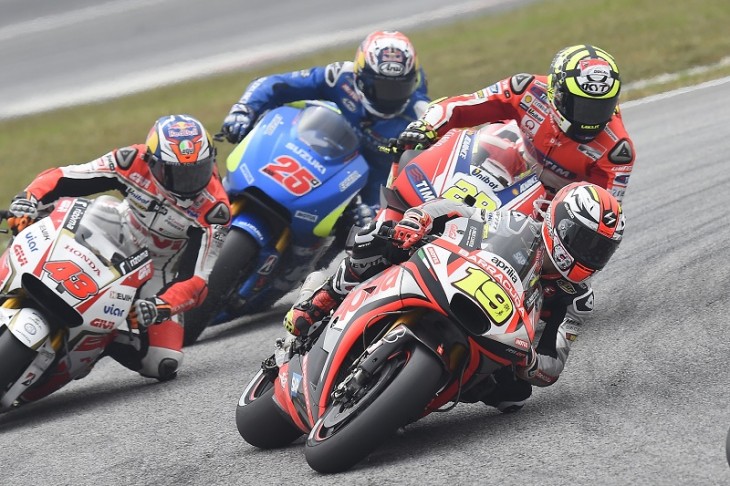 APRILIA, BEST RACE OF THE SEASON WITH STEFAN BRADL FINISHING TENTH. ALVARO BAUTISTA ALSO FINISHES IN THE POINTS
ROMANO ALBESIANO: “WE ARE IMPROVING AND WE ARE CONFIDENT FOR NEXT SEASON”

Sepang (Malaysia), 25 October 2015 – With a nice weekend that he had begun during practice and qualifiers, Stefan Bradl rode his Aprilia RS-GP to a tenth place finish on the demanding Sepang track. Bautista also, despite problems with poor grip, finished in the points to contribute to the best weekend of the season for Aprilia Racing Team Gresini which finished the race taking tenth and fifteenth place.

After a very good start – Bradl moved into eighth on the first lap and Bautista fourteenth – the two riders joined the central group. After finding his pace in tenth place, Stefan battled skilfully, holding onto his position and finishing just behind the group that was battling for positions up to seventh place. Alvaro, with grip progressively worsening, was forced to give up fourteenth place just before the wire, in any case earning one championship point.

ROMANO ALBESIANO (Aprilia Racing Manager)
“We are very pleased. This was our very best race of the year with the overall performance of both riders and for Stefan’s work in practice and especially in the race, where he took a brilliant placement, above all staying close to the second group and also staying ahead of some very talented rivals. It was a shame about Alvaro who was unable to solve his grip problems throughout the weekend. I’m thinking back to our first tests on this track and I can see that our bike has improved a lot. We have two excellent riders and all of this makes us confident for next season.”

FAUSTO GRESINI (Team Manager)
“Stefan rode an incredible race. He really did well. We took a well deserved tenth place finish, especially since we crossed the wire very close the group of riders ahead of us. This is very satisfying and, thinking back over our progress, performance that shows just how far we have come in less than a year. Today we saw an important race which, besides Stefan’s good finish, had Alvaro finishing in the points despite some more difficulties compared to his team mate.”

STEFAN BRADL
“First of all I’d like to thank the team, Romano Albesiano and Fausto Gresini for believing in me and giving me this chance, especially after the disappointing first half of my season. I had already shown my potential various times in practice, but it took just a bit more time to come up with a concrete race result. Throughout the weekend everything went very well. We were able to find a good setup from the start and the entire team worked very well, as always. It’s nice to have been able to give them a good result in return, which they definitely deserve. It was a very long race for me. At the beginning I could have been very fast, but not enough to follow the riders ahead of me, so once I found myself on my own it was hard to stay focused and manage the gap over my rivals. I’m very happy. Finally a good race result!”

ALVARO BAUTISTA
“This was a hard race for me because I wasn’t able to find the right setup. We tested a lot of things but I was never able to find a good feeling, so from this point of view it was the most difficult race yet. I also got off the line well but the front end kept closing up going into turns and when the tyres started to wear I had big problems with grip. It’s a shame because in recent races things had gone rather well. But now I want to thank the team for all the hard work they did for me and congratulate Stefan who had a great weekend and was very competitive in the race as well.”