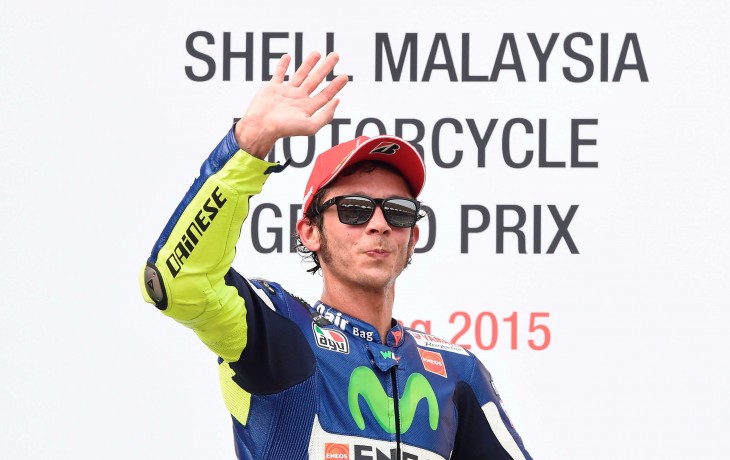 Valentino Rossi has appealed the decision by the FIM to assign 3 penalty points to him as a result of the clash with Marc Marquez at Sepang to the international Court of Arbitration for Sport in Lausanne, Switzerland. In addition to seeking an elimination, or reduction, of the penalty points assigned him, in perhaps a brilliant move, Rossi has asked the Court to stay the execution of the penalty until after the race at Valencia on November 8.

In other words, if Rossi successfully obtains a stay of execution, even if he ultimately loses the appeal, the grid position penalty would be imposed at Qatar when the MotoGP series opens next year, rather than at Valencia, which would allow Rossi to pass through the normal qualification process and start much higher on the grid.

To remind our readers of the context, Rossi leads Yamaha teammate Jorge Lorenzo by 7 points in the championship going into the final race at Valencia.  Currently, the penalty requires Rossi to start last on the grid, substantially reducing the likelihood he will be champion this year.

Here is the press release from CAS issued earlier today:

Lausanne, 30 October 2015 – Italian MotoGP rider Valentino Rossi has filed an appeal at the Court of Arbitration for Sport (CAS) against the FIM Stewards’ decision to impose 3 penalty points on his record following an incident with another rider during the Shell Malaysia Motorcycle Grand Prix race held on 25 October 2015.

In his appeal to the CAS, Mr Rossi seeks the annulment of the penalty, or at least a reduction from 3 points to 1. Together with his appeal, Mr Rossi has filed an urgent application to stay the execution of the challenged decision in order not to lose his place on the starting grid at the next, and last, event of the season which will be held in Valencia/Spain on 6-8 November 2015.

An arbitration procedure is in progress. A decision on Mr Rossi’s request for a stay is expected to be issued no later than 6 November 2015.