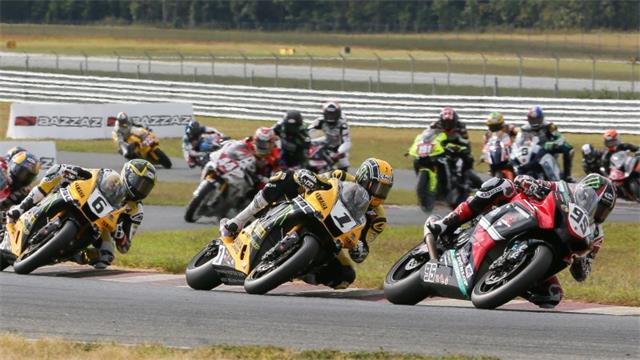 MotoAmerica has released its Sporting Regulations for 2016. (Photo by Brian J. Nelson)

MotoAmerica has released its Sporting Regulations for 2016 and one of the biggest changes is the way points are paid out in the combined Superbike/Superstock 1000 class.

One of the advantages of the new points system means riders in both classes will have an incentive to race one another. Last year if a Superbike racer was racing a Superstock 1000 racer there was no reason to battle other than pride, because the classes were scored separately. Under the new rules riders Superbike will have a motivation to beat a Superstock 1000 rider and vice versa since they will now be competing for championship points against one another.

At the MotoAmerica AMA Superbike season finale at New Jersey Motorsports Park Cameron Beaubier rode a cautious and calculated race, and brought factory Yamaha YZF-R1 Superbike across the finish sixth overall (third in the Superbike class) to win the Championship by four points over Josh. Under this new system Beaubier would have had to beat the Superstock 1000 riders in front of him.

Both classes, however, will continue to have separate podiums for the top three finishers in each class and purses will remain separate and will continue to be calculated on finishing order according to class.

“For the 2015 season, MotoAmerica, the AMA and FIM North America made the decision to combine the Superbike class with the newly introduced Superstock 1000 category in an effort to increase the grid numbers,” MotoAmerica partner Chuck Aksland said. “Both classes were scored separately. However, this led to some confusion about who was in what position on track for our spectators. For this reason, we have chosen to adapt a similar format to the MotoGP Open Class Championship. Superbike will see both the Superbike and Superstock 1000 classes compete for positions and overall championship points on track. Superstock 1000 will continue to have its own championship outside the Superbike class. We believe in making the change that our trackside and viewing audience will find it much easier to identify the positions of the riders during the race.

“Additionally, we have made minor changes to reflect the continued process of adapting FIM rules and procedures as is appropriate for racing in the United States.”

Other notable changes to the sporting regulations include: With the exception of Superbike, all MotoAmerica classes will now feature some variation of a one-bike rule; changes to the safety flag procedures when the racing surface is wet; and changes in the Superpole 1 qualifying procedure that will open it up to all riders within 107 percent of the fastest rider in any session.

Those wanting to view the entire 2016 Sporting Regulations document, can do so by Clicking Here.