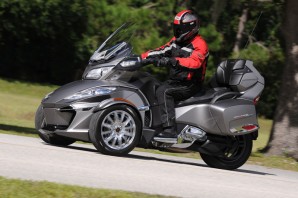 Get too crazy in the corners, intentionally or not, and the Spyder’s VSS will rein the bike in.

They say good things come in threes. For fans of the Can-Am Spyder RT “roadster,” now that saying doesn’t just apply to the number of wheels on this sporty touring machine. For 2014 Can-Am—a division of Bombardier Recreational Products based in Valcourt, Quebec, Canada—has replaced the 998cc, 5-speed V-twin in the RT touring version of the Spyder with a new liquid-cooled, 1,330cc transverse in-line triple with six speeds. This engine layout is known for its torque and smoothness potential, good qualities to have in a touring bike engine. 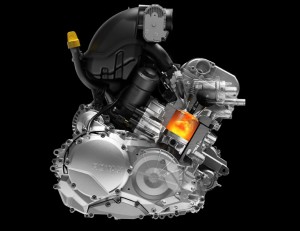 Made in Austria by BRP-owned Rotax, the ACE (Advanced Combustion Efficiency) triple’s 120-degree crankshaft gives it perfect primary balance, and a gear-driven counterbalancer takes care of the secondary and rocking couple vibrations. Can-Am says it makes 96 lb-ft of torque vs. 80 in the V-twin, and 115 horsepower vs. 100. Not exactly eyeball-flattening in a machine that weighs a claimed 1,012 pounds dry—about 60 pounds more than the 2013 RT—but the curve is such that the bike has about 40 percent more low-end torque than before, the better for cruising, climbing hills and carrying a passenger and gear as well as towing a trailer.

While roll-on testing back-to-back with a 2013 RT V-twin at the 2014 launch last week in Florida showed the new RT triple is not appreciably quicker at lower speeds, BRP Project Leader Michael Tissier said the goal was to improve roll-on acceleration from 80-120 kph, or 50-75 mph, and there it does feel stronger and less busy than the revvier twin. The 2014 RT’s top speed is higher, it idles lower at 900 rpm and taller gear ratios drop the rpm significantly at cruising speed. Overall the roadster’s NVH (noise, vibration, harshness) are all significantly reduced, while the triple’s signature exhaust note and feel give it an impressive turbinelike quality, like a cross between a Honda Gold Wing and Triumph Rocket III. I noticed a touch of vibration cruising at 4,100 rpm in top sixth gear, which Tissier attributed to some resonance from the belt final drive. 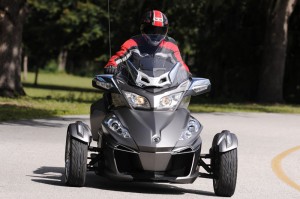 Valve adjustments are no longer required with the RT’s new triple, and in keeping with forthcoming requirements it already meets Euro 4 emissions specs, though the engine still requires premium 91 octane fuel for best performance (it can safely run 87). We didn’t have the opportunity to measure our fuel economy on the short 100-mile test ride (complete with BRP employees front and rear and an Orlando Sherriff’s Department escort), but BRP says the RT will go as much as 250 miles before the 6.9-gallon tank runs dry. That’s probably using the new ECO mode with shift indicator, which softens power output and throttle response and coaches you when to shift to save fuel.

Touring riders will also appreciate the new 1,200-watt alternator that replaces the V-twin’s magneto, and the careful attention paid to heat management on this model—even in the 95-degree Florida heat, wearing mesh riding pants over jeans, I never felt any engine heat. Cooling capacity has doubled, and the radiator fans have a reverse mode that blows hot air away from the rider at a slower pace—in traffic, for example. No lane-splitting on this baby! Some of the test machines had trouble idling after numerous photo passes in the swampy heat, and later BRP reps told us that they found the PCV valve had been installed incorrectly (um, backwards) on those bikes.

New shocks front and rear with bigger pistons improve suspension performance, and the cushy new “Ultra-Comfort” touring saddle is ready to receive an optional rider backrest, just one of many new accessories. Styling has been tightened up with more abbreviated fenders, a new fascia with a larger front intake area and new trim deflectors—the Spyder now appears as if it’s literally scooping up the road ahead. 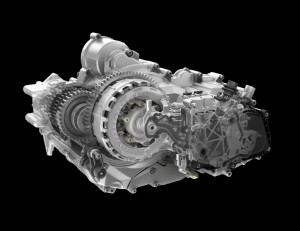 The touring RT comes with a manual transmission with reverse, but being a lazy sort I thought I’d try the available semi-automatic. With no clutch lever or foot shift lever, changing gears is a slick thumb-and-forefinger, up-down pushbutton affair on the left grip. While the rider must always upshift, the transmission will do the downshifting all the way down to first if desired. The engine’s increased power and new layout meant moving away from the twin’s mechanical flyweights in the semi-automatic trans to a hydraulic clutch module to generate the clutch force, and upshifts take longer at lower speeds and create a noticeable interruption in the power flow. Rev the engine higher before shifting and it happens much more quickly.

This is only the third Spyder I’ve put many miles on, but most of the changes are clear improvements. The engine is smooth, strong, quiet and low maintenance. Handling is less darty on the highway while still low-effort at slower speeds thanks to the Dynamic Power Steering, and the independent front and optional adjustable rear air suspension soaks up the bumps like a luxury car. For 2014 the Vehicle Stability System (VSS), which integrates engine management, traction control and the anti-lock brakes, has been refined to intervene a little less and also more smoothly. It no longer cuts the power and applies the brakes in fits and starts as it did on the previous models when cornering too aggressively. This prevents wheel lift and other undesirable hijinks and lets you enjoy the inherent stability of the two-in-front, one-in back, rear-wheel drive layout of the Spyder, which can corner much harder than a trike with two in back. 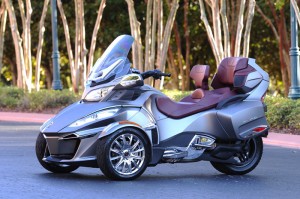 As you might expect of such a big machine, comfort is supreme, with plush rider and passenger accommodations and a natural reach to the wide handlebar. It took me some time to stop reaching for clutch or brake levers at stops, but after a while one doesn’t miss them, except perhaps on the floorboard-equipped RT Limited, which requires completely lifting your right foot to apply the single powerful brake (the triple discs are all linked to the one pedal). It’s much easier on the base model with footpegs since you can simply apply toe pressure without lifting your foot off the peg. The electric windscreen does a marvelous job, lowering well below eye level for some breeze and raising well above, silencing the wind and allowing all of the prodigious volume from the 4-speaker sound system to reach the rider. Once you get past the longish starting drill (a warning screen must be acknowledged that takes a few seconds to display), release the parking brake, ride off and engage the cruise control, and you’ll be in the next state before you know it. If you don’t want to hear a lot of annoying beeping just be sure to engage the parking brake again before shutting off the ignition—the bike will shift into neutral for you. 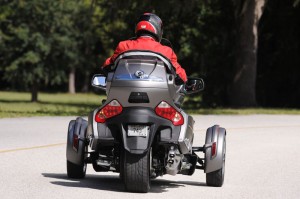 Four storage compartments (front trunk, saddlebags and trunk) hold a ton of gear, including a full-face helmet in front and in the right side case. Rigid liner bags are available for all four, and there’s a handy center-console compartment as well. If that’s not enough, Can-Am offers a specially made trailer for the Spyder ($4,499—it’s a really nice trailer, we’re told), the only one that won’t void the machine’s warranty. Interestingly, connecting it tells the roadster’s VSS to behave accordingly, though the VSS does not alter the way the trailer brakes behave.

Can-Am has also updated the RS (sport) and ST (sport-touring) models for 2014 with new airflow side panels for a sportier look. The ST-S adds new gas-charged Fox shocks and new machined six twin-spoke wheels. RS-S versions benefit from new sport-tuned VSS for faster cornering and the new wheels as well.

(A version of this article Three By Three was published in the December 2013 issue of Rider magazine.)