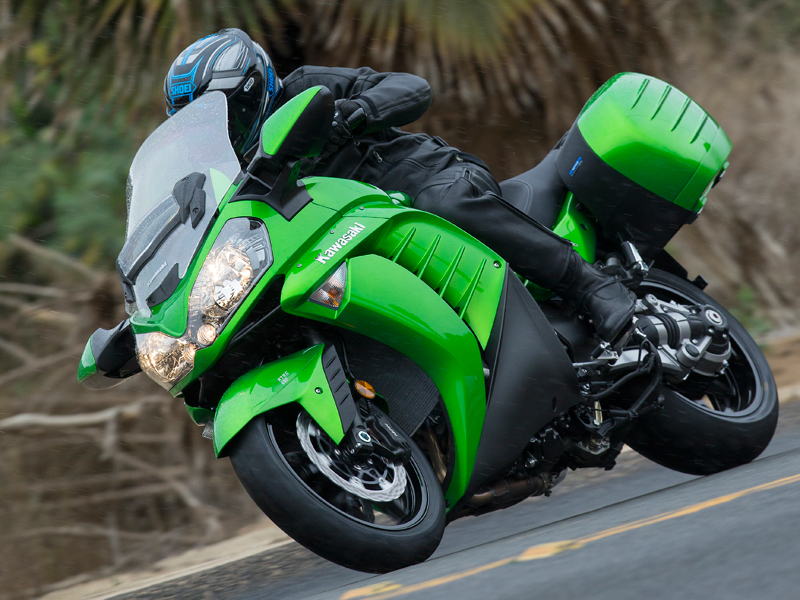 Kawasaki has given the Concours 14 ABS a minor update for 2015, and its available in Candy Lime Green for the first time.

Borrowed from the French, concours (pronounced kawn-koor; the “s” is silent) refers to an assemblage of things or a contest, such as a concours d’elegance, where motorcycles that have been painstakingly preserved or restored are judged on their appearance and historical fidelity. Since 1986, Concours has also been the name of Kawasaki’s “supersport” tourer. The original ZG1000, produced for 21 years with few changes, was based on the Ninja 1000 and made ready for the long haul with a retuned engine, shaft drive, a tall windscreen, upright seating and saddlebags. The supersport ante was raised for 2008 with the Concours 14, which was based on the mighty Ninja ZX-14—a bike so powerful that it had to be electronically limited to 186 mph to avoid running afoul of European bureaucrats. It hewed to a similar sport-touring formula as the ZG1000 with added modern touches such as variable valve timing, available ABS, an electric windscreen, a tire-pressure monitoring system and KIPASS fob security. 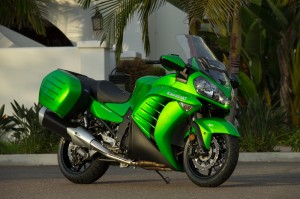 Often described as a velvet hammer, the Concours 14’s 1,352cc in-line four makes big horsepower and delivers it with finesse.

We were impressed by the Concours ZG1000 (dig up the April 1986 issue of Rider to read our first road test), and even more so by the Concours 14, selecting it as our 2008 Motorcycle of the Year. The Connie’s liquid-cooled, DOHC, 16-valve 1,352cc in-line four is capable of neck-snapping acceleration, sending 144 horsepower and 95 lb-ft of torque to the rear wheel on Jett Tuning’s dyno (2013 model), yet all that giddy up is delivered with the utmost smoothness and civility. Throttle response is crisp and direct, power increases linearly with no hiccups; driveline lash is minimal and dual balancers muffle unwanted vibration. The engine is mated to a slick-shifting 6-speed transmission and a Tetra-Lever shaft drive that eliminates jacking, with everything held in place by a lightweight, rigid aluminum monocoque frame. Factor in Herculean brakes, taut suspension, cavernous saddlebags and comfortable two-up seating, and the result is one of the greatest sport tourers ever made. 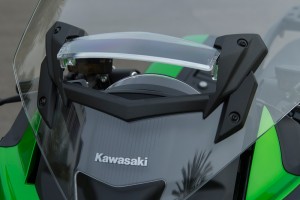 New adjustable windscreen vent has two open positions or it can be closed. When open, helmet buffeting is eliminated.

Now entering its third generation, Kawasaki’s strategy with the Concours 14, as it was with the venerable ZG1000, has been one of refinement rather than reinvention. A major update for 2010 brought improved engine heat management, wind protection, handling and comfort, as well as optional Kawasaki Traction Control (KTRC) and Kawasaki Coactive-braking Technology (K-ACT) ABS to enhance safety, but the basic platform stayed the same. Changes for 2015 are relatively minor, aimed primarily at further improving comfort and low-speed handling. There’s a new seat, an adjustable vent on the windscreen, a new exhaust heat shield and a low-friction steering stem seal. The fully linked K-ACT ABS has been revised, the first gear ratio is slightly lower and the initial rear spring preload setting is stiffer. Beyond the new Candy Lime Green color (in addition to Metallic Spark Black), cosmetic changes are limited to stainless steel bezels around the analog gauges, double-stitch detailing on the seat and a resin tank pad. 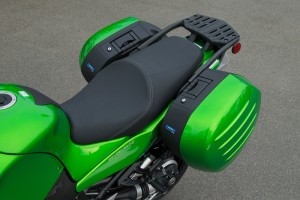 Seat is narrower in front, has a more supportive shape and has a longer, wider passenger area.

Unlike other open-class sport tourers, the Concours 14 still uses traditional throttle cables rather than a throttle-by-wire system. Which means there are no engine or riding modes, and no electronic cruise control. In our last sport-touring comparison, the Concours was the only bike without cruise control (Rider, May 2013), and, according to comments by some of our Facebook fans, that’s a deal breaker. When asked why cruise control hasn’t been adopted, Kawasaki reps cited cost as an issue. Admittedly, the Concours 14 offers a lot of bang for the buck; MSRP for the updated 2015 model is $15,499, which is $700 less than last year’s model and substantially less than most of its competitors.

Throwing my leg over the saddle and running my eyes over the instruments triggers a flood of memories from the thousands of miles I’ve logged on the C14 during road tests, comparison tests and a weeklong, two-up tour test with my wife. Of the hundreds of motorcycles I’ve ridden over the years, the Concours 14 remains one of my all-time favorites thanks to its special blend of peg-scraping performance and chase-the-horizon comfort. My long arms reach the grips with ease, putting a slight bend in my back, reminding me that the Concours, like the Yamaha FJR1300, has a sportier riding position than the European competition. The seat’s sharp edges, which used to dig into my thighs on long rides, are now gone. Seat height is unchanged at 32.1 inches, but the saddle is narrower in front for an easier reach to the ground, it has a more supportive shape and its new cover material is slip-resistant. The passenger seating area is longer and wider, too. A new accessory touring seat ($534.95) provides extra long-haul comfort and has a special cover that resists heat absorption on hot, sunny days. 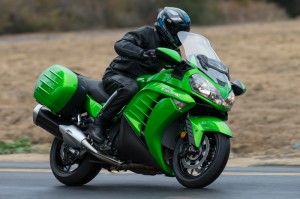 The Concours 14 ABS has standard heated grips, a tire-pressure monitoring system and a electronic fob for keyless starts.

A much-needed winter storm blew in during the first day of this road test, and before the tires got any heat into them, raindrops began to splatter onto the windscreen. On went the heated grips and up went the windscreen; luckily I was dressed for the occasion, covered in Gore-Tex from the neck down. Opening and adjusting the windscreen’s new three-position vent (two open, one closed) is tricky while riding, but once open it eliminates the low-pressure area behind the screen and creates smooth airflow around the rider. Bye-bye helmet buffeting, a long-standing Concours complaint. The influx of fresh air is a mixed blessing on cold (and wet) days but provides welcome relief otherwise. The windscreen is the same size and shape as before, and is retrofittable to earlier models. Even at full height I can see well over the top, and it isn’t particularly wide. Wind protection gets a passing grade, but not high marks.

Tipping the scales at 690 pounds fully fueled (claimed), the Concours is a big, heavy motorcycle, and it feels substantial from the saddle, especially around town and in parking lots. Low-speed, tight-corner handling has always been on the sluggish side, in part because narrow handlebars limit steering leverage. The new steering stem seal helps, but only so much can be done without more substantial chassis alterations. Low-speed handling also benefits from revisions to the K-ACT ABS, which has a new ABS module and revised master cylinders. The fully linked system has two modes. In Standard Mode (recommended for solo and sport riding), the linked effect is lower during initial lever stroke for more natural feel. In High Combined Mode (recommended for touring and two-up riding), the linked effect is more pronounced, which helps the system distribute braking force front and rear to maintain chassis stability. During low-speed maneuvers such as U-turns, applying the rear brake for stability also engages the front right caliper, which can work against the rider’s intentions. The front and rear brakes are still fully linked in both modes, but now, in Standard Mode, the linked effect on the front caliper is lower when the rear pedal is applied, making the system feel more intuitive.

Although low-speed handling requires some muscle, the Concours 14 ABS is stable and predictable at speed.

Kawasaki has whittled away a few more rough edges on the Concours 14, but it has stopped short of a complete overhaul. Depending on your point of view, that may or may not be a good thing. While other manufacturers have gone whole hog with riding modes, electronic suspension and other gadgetry that have pushed sticker prices ever higher, Kawasaki has resisted the temptation. Even though the basic platform hasn’t changed since 2008, the Concours continues to hold its own among sport tourers as the king of horsepower, the king of luggage capacity and the king of value. Long live the king! 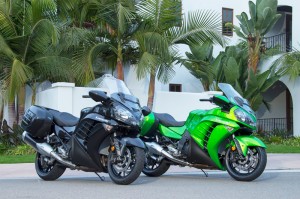