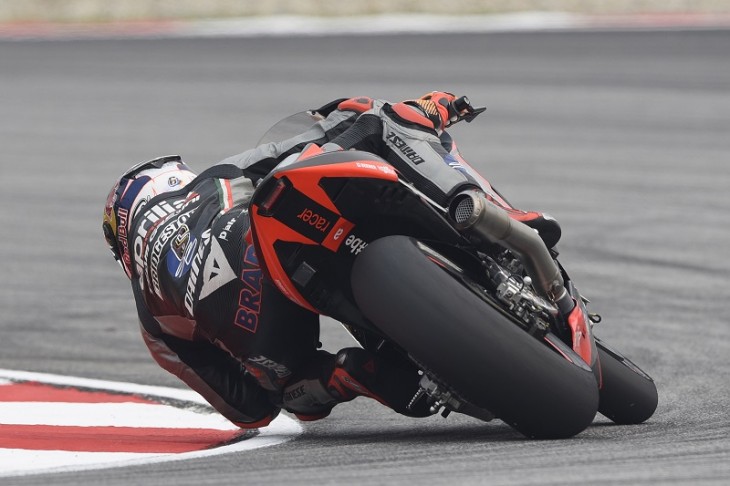 Valencia (Spain), 3 November 2015 – Recent MotoGP Championship races have seen Bautista and Bradl demonstrating the good progress made in the performance of the RS-GP. Both of the Aprilia Racing Team Gresini riders shone in the three Pacific area rounds: in Japan Bradl had the best qualifiers of the season, barely missing out on Q2 by just over a hundredth of a second, in Australia Bautista rode one of the best races of the year, significantly reducing the gap behind the leaders, whereas at Sepang it was Stefan who finished the race in tenth place, matching the best finish of the season for the RS-GP. These results are indicators of the progress achieved and which make the team optimistic for the project development which foresees a completely new bike on the track in 2016. At Valencia, in the last race of the championship, Bautista and Bradl will be seeking confirmation of this positive trend.

“In recent races some significant progress in our performance was demonstrated and it is important to note that this happened on tracks with very different characteristics from one another – Motegi, Phillip Island and Sepang. The Valencia track will be another important test bench to build experience with its specific traits. Here we will also be trying to bring home a good result in this round which is at the same time the last round of the season and the first event of next season, with tests scheduled on the days following the race, with the new tyres and the new electronic management systems.”

“We are preparing for the last round of the season with exactly the same enthusiasm that we’ve had for all the races held so far. In fact, this year every Grand Prix has been a new discovery for us and Valencia is no exception. From the first tests conducted in 2014, right here on the Ricardo Tormo circuit, up to the present, we have done a lot of work, building our experience, and the results have been seen in the recent non-European rounds where we brought home some concrete satisfaction both in qualifying and in the races. We hope to finish out the season with another nice team effort to then start off the 2016 tests with a bang.”

“The Valencia Grand Prix is a very special round, not only because it’s the last of the season, but also because we are back racing in Spain. Racing with my fans trackside is always a great feeling. This is the track where I first rode the Aprilia so we’ll have a few points of reference, but of course the bike we had then has changed a lot, so we’ll have to see how it performs now. The track has very slow turns, so above all we’ll need a bike that handles well and that can turn easily. It will definitely be a ‘hot’ weekend, but we’ll be moving forward with our development programme with the goal of finishing out the season with good sensations and, if possible, with a good result too.”

“The Valencia track is a nice challenge for our bike since it is characterised by a layout with a lot of tight turns. In any case, I can’t wait to get onto the track. The good result we took at Sepang really has us pumped up so we’ll be arriving at the last round of the season with plenty of motivation. Obviously I hope to be able to finish another good weekend in order to close out the championship in the best way possible before focusing on 2016. Quite a big crowd is expected so there will definitely be a fantastic atmosphere!”