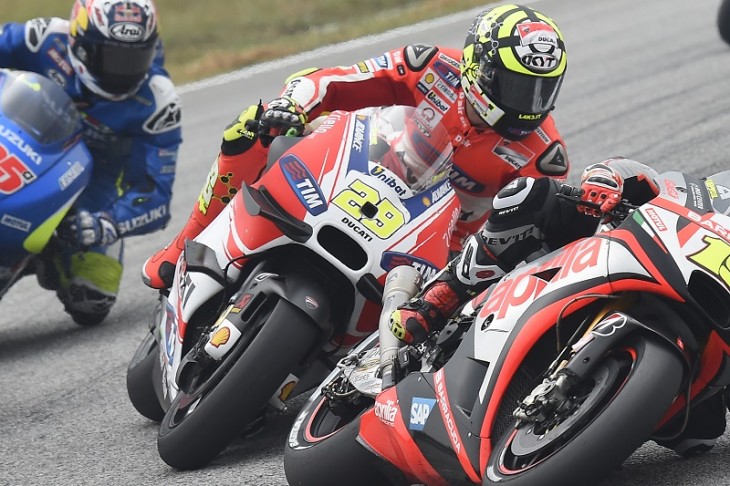 Both Ducati Team men were forced to retire from the Shell Malaysia Motorcycle Grand Prix, the penultimate round of the 2015 season, which was held today at the Sepang International Circuit.

Andrea Iannone, who started from sixth place on row 2, suffered a setback immediately after the start, when a stone holed the radiator of his Desmosedici GP15 and the Italian had to stop on lap 2.

Andrea Dovizioso, who started from row 3 with seventh quickest time, powered away well from the grid and crossed the line at the end of the opening lap in fifth place. The Italian maintained that position until lap 6 and then moved up one place on the following lap after Marquez crashed out. Andrea stayed in fourth place for four laps, but on lap 11 he crashed following a contact with Crutchlow, who was trying to overtake him.

After these results, Iannone drops to fifth place in the overall standings, two points behind Pedrosa, while Dovizioso remains in seventh place behind Smith.

“Today the conditions were very difficult, because it was really hot and it was not possible to push as hard as we did in practice. I was trying to manage the situation in order to get to the flag in a good condition. Crutchlow tried to pass me in the change of direction between Turns 5 and 6 but he was not able to control his bike and made me lose the front. I know Cal well and I’m sure he didn’t do it deliberately, but he caused me a lot of damage and in the championship we lost too many points from Smith. It was a real pity, because even with these extreme conditions we could have taken home a good result.”

“I’m really disappointed because for the second time this season I had a problem with the bike at an important moment for me, seeing as I am fighting for fourth place in the championship. Here there was a chance of doing a good race, because this morning in the warm-up the bike was going well. Probably at the start a rider ahead of me threw up a stone which hit and holed the radiator. For sure it’s not an ideal situation to go to Valencia two points down on Pedrosa: it will be tough to fight for fourth place, but that remains my goal and I will try my hardest to achieve it.”

“Despite a few problems in practice, we managed to find a good set-up for both our riders and as a result we were confident we could do a good race. Unfortunately Iannone had to stop immediately with a hole in his radiator, caused by a stone at the start, while Dovizioso was having a good race in fourth place until he crashed after making contact with Crutchlow. It was a pity because also here in Malaysia both of our riders could have scored some useful points for the championship.”