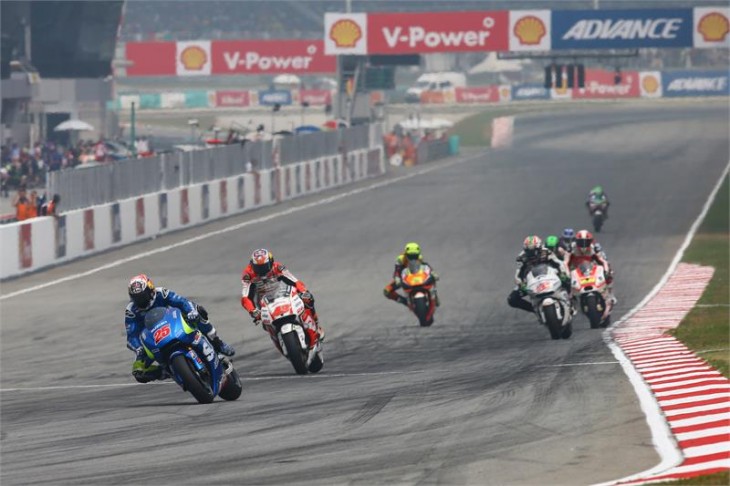 The tough circuit of Sepang proved to be not so hard for Team SUZUKI ECSTAR and although the results of today’s race did not completely satisfy the riders in terms of final positions, their performances compared to the February test were much more positive and gave valuable information to the development team.

Aleix Espargaro started from 10th place on the grid after the crash in Qualifying that prevented him making a second attempt with his timed attack, but he had a good start and recovered some positions at the very beginning of the race. This allowed him to keep contact with the top-10 group and fight further. After half the race, he encountered grip problems on the rear, which prevented him from keeping up his pace, finishing his race in seventh place after a strong battle with his team-mate on the last two laps.

Maverick Viñales, on the other hand, didn’t make such a good start and lost many positions before the first corner, making his race much harder. Lap-after-lap he found more confidence and set a fast race-pace, recovering many positions across to 10th place. Towards the final part of the race his pace was good, allowing him to catch-up to his team-mate, even if at the end he had to resign himself to eighth place.

“I think that for some reasons this race has been positive for us. We were expecting this circuit to be very tough for us but at the end it was not bad to end P7 and P8; a little worse is the distance from the winner. We still miss something in our performance, but we made some very big steps forward compared to the test we made here in February. We suffered from the two long straights but we did very well in the other sectors, which means we have an effective machine in some areas. At the same time we are aware that we still need to improve our weaknesses, the R&D department in Japan is already working hard for the new bike and all this experience is crucial for us.”

“It’s good that we got some points but at the end of the day, I’m not so happy for the race, it is true that this circuit was not easy for us but I have the feeling I could have gained a better result after the progress we have made so far. Of course the qualifying penalised us, starting from behind is never easy and I couldn’t overtake in the early laps. With a full tank and jammed in the middle group I couldn’t find the best performance nor take my preferred lines, so I struggled to find a consistent pace. It’s a pity; I could have had a better race-pace and fight for a better position. Now we go to Valencia, the track is tight and maybe more favourable for us, so I hope we’ll get a better feeling and find a better result.”

“The start was the key of today’s race. Unfortunately I couldn’t do so well as when the lights went out, suddenly many riders overtook me. I lost many positions and when this happens it is always very hard to recover. Then I found a good pace, even if I still suffered with rear grip. I’m disappointed with the result, we knew this track was hard for us but then in practice we found a good performance, therefore our expectations for the race was better than this. Let’s see in Valencia, I think that the work we are doing is positive and will take us to the point where we deserve to be.”