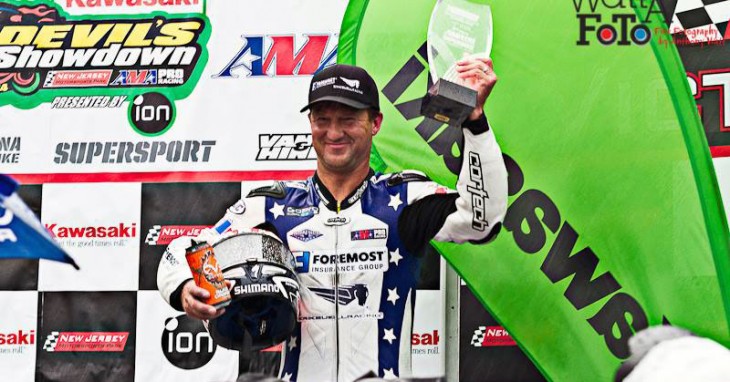 DAYTONA BEACH, Fla. (Nov. 11, 2015) – Larry Pegram has established himself as a prominent road racer at both the national and global level. On Saturday, Nov. 21, the former World Superbike pilot will put his dirt track skills to the ultimate test in the Superprestigio of the Americas in Las Vegas.

“I’m really looking forward to competing in the Superprestigio of the Americas,” said Pegram. “It’s an honor to be invited to compete in such a prestigious event and I can’t wait to get out to Las Vegas. My main goal is to just go out there and have fun, but the racer instinct inside of me obviously wants to perform well.”

While the pinnacle of Pegram’s career came in 2015 when he raced and managed a team in the elite ranks of World Superbike, one of his most impressive seasons came in 2009. In addition to three AMA Superbike wins that season, he also rode the Lloyd Brothers Motorsports Ducati to a pair of GNC1 main event appearances at the Springfield Mile and the Indy Mile.

“I did a little riding on the short track in my back yard last week with Jared Mees,” said Pegram. “Other than that though, it has been a while since I’ve really gotten after it on dirt. I love it though, and after a couple of days of riding and getting reaccustomed with the machine, it’s like riding a bicycle. It will be great to race indoors in Las Vegas. Racing indoors is a different animal, I grew up in Ohio and that’s all I did as a kid during the winter time. It’s an exciting form of racing, that’s for sure. Next weekend should be a lot of fun.”

The Superprestigio of the Americas presented by Yamaha will bring together leading motorcycle racers from various motorcycle-racing disciplines from around the world to compete head to head with the stars of AMA Pro Flat Track on a specially-designed indoor short track at the Orleans Hotel & Casino in Las Vegas on Nov. 21, 2015. The special race is part of the big Las Vegas doubleheader weekend with the AMA Pro Flat Track finale taking place the night before (Nov. 20, 2015) on the same track.

To purchase tickets for the Superprestigio, please visit www.superprestigio.com. If you can’t make it to Vegas, be sure to tune in to the FansChoice.tv broadcast at www.fanschoice.tv/watch-live/ama/flat-track or watch the cable broadcast of the event on NBC Sports Network the following weekend on Sunday, November 29 at 9:00 p.m. ET (6:00 p.m. PT).