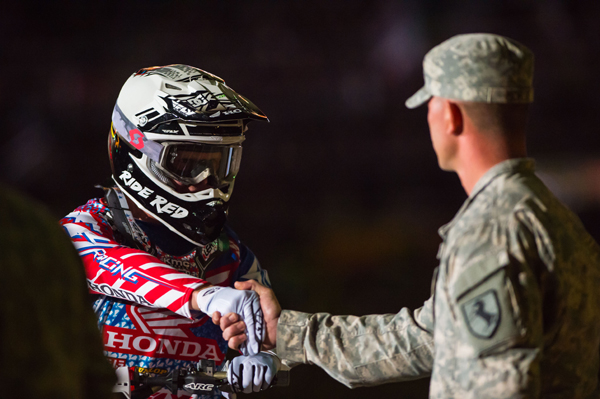 ELENTON, Fla.(November 11, 2015) – On a day in which America honors the service and sacrifice made by the men and women of the United States Military, Feld Motor Sports® announced today that Monster Energy AMA Supercross, an FIM World Championship’s second visit to San Diego’s Petco Park during the 2016 season will also mark the third annual Military Appreciation Race on February 13. The world’s premier off-road motorcycle racing series will continue its commitment to supporting members of the Unites States Armed Forces by partnering with United Service Organizations (USO) San Diego, a 501(c)(3) nonprofit organization serving active-duty, reserve, guard and military families throughout California’s southernmost county.

**Members of the military can receive $10 off on tickets by using the code SDUSO (additional fees may apply). Additionally, all military members will receive free access to the Party in the Pits with valid identification (limit one entry per ID). **

The entire 2016 Monster Energy Supercross Championship will be broadcast live on the American Forces Network (AFN). The Department of Defense operates the American Forces Network or AFN. AFN, a worldwide radio and television broadcast network reaches a half million American active duty, uniformed service personnel and their families overseas, stationed on U.S. military bases, at U.S. embassies and US consulates in 175 countries, as well as 140 U.S. Navy ships at sea.  AFN is a service of the American Forces Radio and Television Service (AFRTS), a field office of the Defense Media Activity (DMA).

In two years the Military Appreciation Race has emerged as one of the most anticipated races on the entire Monster Energy Supercross schedule, recognized throughout the racing industry with military inspired riding gear and motorcycle graphics. The entire supercross racing community has paid its respects to the men and women who serve our country, and as a result over $82,000 has been raised in support of San Diego’s military community through donations and auctions featuring race-worn gear from the Military Appreciation Race.

To commemorate the new partnership with USO San Diego, Feld Motor Sports will donate $5,000 to the non-profit. Additionally, the hugely popular rider auction will continue for a third year, featuring exclusive one-of-a-kind gear worn by the stars of the sport at this special race, including Eli Tomac, whose brother Greg is an officer in the U.S. Air Force, last year’s winner Trey Canard, reigning Monster Energy Supercross Champion Ryan Dungey, Ken Roczen, James Stewart and more.

“USO San Diego is honored to be the beneficiary of the 2016 Monster Energy Supercross Military Appreciation Race and its supportive Monster Energy Supercross community,” said Arne Nelson, USO San Diego Chief Executive Officer. “The funds raised will provide much-needed support for our free programs and services offered to the region’s Active Duty, Reserve, Guard and their families. See you there!”

The USO has provided much needed service to members of the military and their families for nearly 75 years, with more than 160 locations around the world. USO San Diego aims to enhance the quality of life for military service members and their families by establishing cooperative relationships between the military community and supportive civilian community. USO San Diego is a premier USO Charter Center providing morale and support services, in addition to a home away from home for all members of the U.S. Armed Forces. In 2014, USO’s services reached the military community over 260,000 times with the San Diego Downtown Center and San Diego’s Neil Ash Airport Center assisting over 154,000 service members.

“The Military Appreciation Race has become an integral part of Monster Energy Supercross in just two years. San Diego has long been one of the most anticipated stops of the championship and with Petco Park sitting the heart of downtown’s picturesque bayfront there couldn’t be a better setting to celebrate our service men and women,” said Dave Prater, Director of Supercross. “We are very excited to have a new, highly renowned partner in the USO. They are one of the most recognized names in military non-profits and we look forward to supporting their efforts with the close-knit supercross community.”

Home to Major League Baseball’s San Diego Padres, Petco Park hosted its inaugural Monster Energy Supercross race last year with Team Honda HRC’s Trey Canard taking the historic win. The Military Appreciation Race will be the second of two visits to the venue, as San Diego will hold a pair of championship races for the first time in the 32 years that it has been a part of the schedule. The San Diego area is home to several military installations, which makes this stop of Monster Energy Supercross a perfect fit to honor to the men and women that have served the country.

Tickets to the Military Appreciation Race at Petco Park are
on sale now and start as low as $20! Additionally, tickets to the first race at Petco Park on January 16 are also on sale. Tickets are available online at Tickets.com, by phone at 619-795-5555, or at the Petco Park Box Office. For additional race and ticket information, log onto SupercrossLive.com. For more information on the Monster Energy AMA Supercross, an FIM World Championship, please log on to , the official website of Monster Energy Supercross.