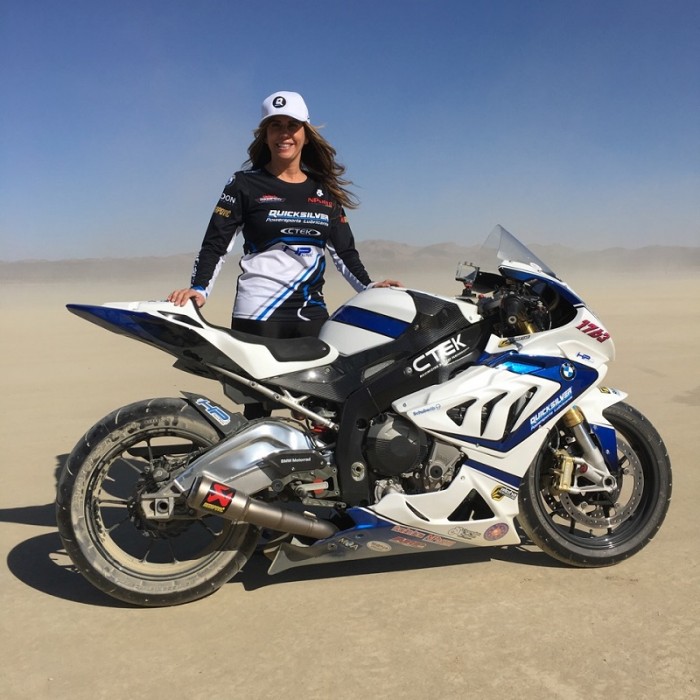 Over 500 show vehicles will compete for awards within the Fairplex buildings. Another 400 – 800 vehicles will join the event over the weekend for the 11th Annual Grand Daddy Drive-In event.

“I’ve always had a passion for land speed racing. Competing on the Salt Flats of Utah and dry lakebeds of California as an independent racer always reminds me of the unsung heroes who made American racing what it is today. This special invitation to appear at the most prestigious rod show just blows me away,” said Thompson. “More importantly, this exhibit will be used as a fund raiser for the SCTA, a non-profit organization that makes racing dreams possible for all competitors, no matter the size of their pocket book,” added Thompson.

Thompson formed her own land speed racing team in 2012 and recorded a personal best top speed of 217 mph at the 2014 Texas Mile. In 2015, Thompson became the first female member of the Colorado Mile 200 MPH Club on her Quicksilver Powersports Lubricants/CTEK BMW Motorrad and is now a member of six-land speed racing 200 MPH Clubs, including the prestigious Bonneville 200 MPH Club. As a result, she is often referred to as “America’s Queen of Speed.”

The Grand National Roadster show will be held at the Fairplex in Pomona, located at 1101 W. McKinley Avenue. For schedule updates and tickets, visit https://www.rodshows.com/gnrs/index.

The GNRS is now in its 67th year. Once known as the Oakland Roadster Show, it is the longest running indoor car show in the world. This will be the 13th consecutive year the show has been produced at the Pomona Fairplex.