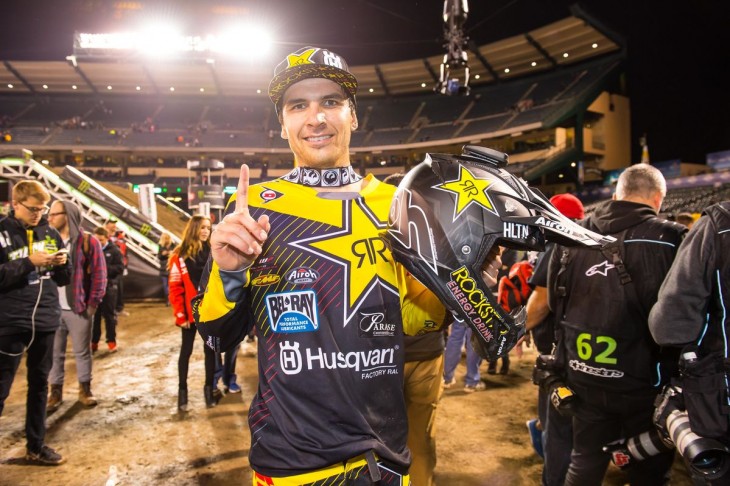 For anyone remotely familiar with the history of off-road racing, the Husqvarna brand is iconic. In the U.S., perhaps the brand’s reputation began with video of Malcolm Smith on his Husqvarna in the movie On Any Sunday. Nevertheless, Husqvarna had never won an AMA Supercross main event in the Premier Class (either 250cc two-strokes or 450cc four-strokes). That changed Saturday night in Anaheim at the opening round of the 2016 Supercross series.

Jason Anderson piloted his Husqvarna FC 450 to the checkered flag and the top step of the podium.  This was not only an historic occasion for Husqvarna, it was Anderson’s first win in the 450 class.

While Husqvarna floundered a bit under BMW ownership, the sale of the brand to Stefan Pierer in early 2013 was a turning point. Pierer, an owner of KTM, immediately began to share technology and hard parts between the two brands, turning Husqvarna into an AMA racing force to be reckoned with almost overnight.

Congratulations to Husqvarna on its first AMA Supercross victory.  Here is a press release from the company following Saturday night’s win:

January 9th, 2016 will forever hold a place in Husqvarna history as Jason Anderson took home a monumental win at the first AMA Supercross round in 2016, held at Angel Stadium in Anaheim, California – a career first for both himself and Rockstar Energy Husqvarna Factory Racing in 450 SX competition. To add to an already historic night, Zach Osborne and his Husqvarna FC 250 race to a 3rd place podium finish.

Jason Anderson has found a new level this season. He has regained his focus with a strict training regimen, and is reaping the rewards as a result. He earned a quick transfer to the 450 main after moving from sixth to second in his 450 heat. In the main, Anderson pulled a third-place start and was looking aggressive. He started to focus on moving through the ranks, but was halted after a red flag in the second lap due to a down rider.  Anderson was mid-pack on the restart, and immediately started moving ahead. Looking determined and committed, he flew through the pack before making the pass for second in lap eight. He moved into the lead on lap 13, and held strong to the finish. The historic Anaheim 1 450 win marks his first in his career, not to mention the first-ever 450 win for Husqvarna. The red plate with now grace his Husqvarna FC 450 at round 2, next Saturday in San Diego.

“I got my first win!” said Anderson. “Tonight at Anaheim 1 was awesome. I got off decent in the first start, but then they red-flagged it so I was a little bummed. My second start was mediocre, but I just started making my way forward and eventually took the win. I’m so pumped. The guys I was passing were waxing me last year, so to even be battling with them was a cool deal.”

Zach Osborne was off to a great start in his 250 heat race and fought his way to the lead by the end of the first lap. He dominated the heat and took home the first heat race win of the 2016 season. He pulled a mid-pack start in the main and immediately starting making passes to move up the ranks. He was on the move early in the race before settling nicely into the third-place spot before taking home his first podium of the season.

“Today was a good day for the whole team,” said Osborne. “It’s awesome for us to leave Anaheim 1 with Jason earning the red plate and me landing on the podium with third in the championship. I had good lap times all day. I went out and won my heat race, and rode a little conservative in the main event but still pulled off a podium so it’s been a great day.”

Christophe Pourcel took 1st gate pick in Heat 1 after setting the 2nd fastest overall time in qualifying practice and finished seventh in the heat after a mid-pack start and would eventually qualify for the main through the semi. He moved up to fifth in the main before moving back through the pack and finishing 18th.

“I was in a good position in the main,” said Pourcel, “but the red flag wasn’t good for me. I ended up outside and didn’t get a good start. I know I have the speed, and Jason is riding good so I can learn from him, too. I’m going to keep pushing and will try to be in the top five.”