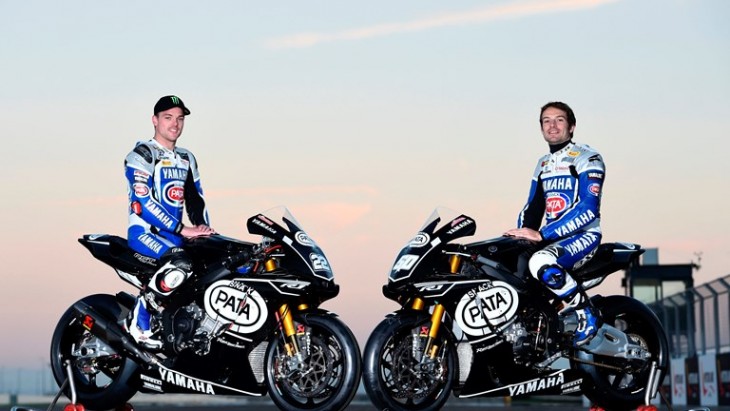 Pata Yamaha Official WorldSBK Team has concluded its first two-day test of 2016 successfully at the Autódromo Internacional do Algarve in Portugal with both Alex Lowes and Sylvain Guintoli undertaking valuable work with their YZF-R1’s.

Initially worried about the rehabilitation of his left shoulder, Lowes confidently set 116 laps over the past two days. While his normal aggressive style was restricted due to his less-than-perfect mobility, the track-time ensured he continued to progress with his new WorldSBK-spec Yamaha ahead of the championship’s opening round next month.

Guintoli worked with his Pata Yamaha crew on a variety of settings-work including new Öhlins front forks, the new specification engine and electronics strategies, completing 90 laps of the rollercoaster circuit in the process.

Focusing on development for the first few rounds of competition rather than ultimate lap time, the Pata Yamaha Official WorldSBK Team now moves on to Spain’s Circuito de Jerez for a further two-day test at the Andalucían track from Tuesday 26th January.

“It has been nice to get out on the bike, especially after a difficult winter, and we’ve started to really work. We’ve had a lot of new parts to test but our main focus has been electronics and trying to find a good chassis setting that suits me.  My shoulder was ok-ish! It was a little better yesterday than today, but I’m hoping a couple of days rest will do it good and I’ll be able to ride more properly in Jerez. Thanks to the team, there were some areas that I struggled with the last time I rode the YZF-R1 which were much better this time, so they have worked really hard over the winter, so thanks to them for that! We have had a few hurdles, but it was good, I really enjoyed it and I’m looking forward to getting to Jerez and continuing to work hard.”

“It’s been a good test so far, with a lot of new parts and a detailed programme to work through. It has been an interesting couple of days and it’s great to be able to try the new parts both at Portimão and Jerez, with such different track characteristics. Yesterday was quite damp in the morning and the work we have been doing has been quite in-depth, with a lot of time spent configuring and changing parts and settings, so we haven’t concentrated on lap times or lap numbers, but the information and progress has been good. The new swing arm and forks have been positive, so we will now continue to work on the settings to get the best from these, with more focus on progressing the electronics when we get to Spain.”