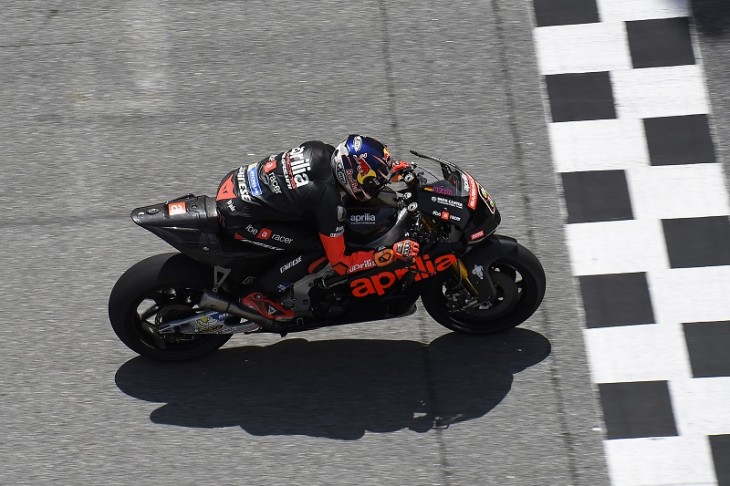 SECOND DAY OF MOTOGP TESTS AT SEPANG, MALAYSIA
WORK ON THE APRILIA RS-GP MACHINES FOR BRADL AND BAUTISTA IS SLOWED BY A LONG PAUSE

Sepang (Malaysia), 2 February 2016 – On the second and penultimate day of MotoGP testing at Sepang the long stop due to a crash on the long straight stretch in front of pit lane (without consequences) by Loris Baz was the big news. The riders had gone onto the track with the green light to take advantage of the good weather conditions, with temperatures slightly cooler than the rest of the day.

So it was a long pause for Alvaro Bautista and Stefan Bradl as well, still hard at work on their Aprilia Racing Team Gresini RS-GP machines, focusing specifically on the new electronics package. When the track opened up again the riders were also able to assess the various tyre options, providing opinions that will influence which tyres will be chosen to start off the 2016 season.

Despite almost two hours of down time, a fair amount of work was accomplished with Alvaro Bautista putting in 52 laps and Stefan Bradl completing 45.

“Today we focused on the new electronics again and that is our main goal. We need to find a good base setting to work from and at the moment we still can’t say that we have found one. We also analysed some new front tyre choices, finding a few improvements in some phases. We are working hard. Making progress is not simple, but we are moving forward one step at a time.”

“For now things are going pretty well. Coming here to Sepang in this heat for the first tests is not easy physically, but I am always happy to be riding again after the break. We are trying to do as much testing as possible, on the electronics and tyres, in order to make progress with our work. Many of the things that we test here will be very useful for the new bike, especially in terms of the electronics where there is still a lot of room for improvement.”