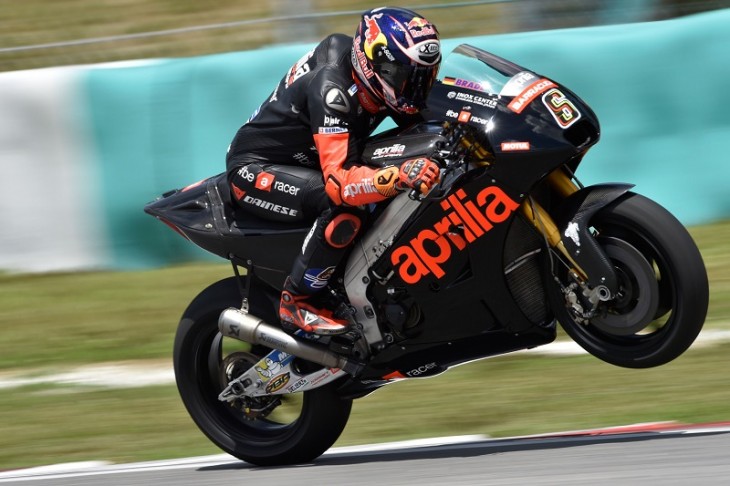 Sepang (Malaysia), 1 February 2016 – The 2016 MotoGP season kicked off with the first day of tests, traditionally held at Sepang, with Aprilia committed to their second year in the top motorcycle racing category.

For the Aprilia Racing Team Gresini official riders, Alvaro Bautista and Stefan Bradl, it is also a return to the saddle after the long winter break, so for the first day they were mainly focused on getting back into the groove. From a technical point of view, the area of greatest interest has to do with the new electronics, a unique package that must be developed and matched to the peculiar characteristics of each bike. The team focused their efforts on this front, looking for a basic setup that can then be transferred to the new 2016 Aprilia RS-GP prototype.

On the first of the three days scheduled Alvaro Bautista put in 34 laps and his team mate, Stefan Bradl, put in 39.

“After two months without a bike this first test is essential for getting back into the groove. We have a lot of work to do, especially in terms of the new electronics package. I’m expecting three intense days where we can take as many steps forward as possible, progress that we’ll then be able to use on the new bike.”

“Here at Sepang we’ll use the 2015 RS-GP, but the work schedule is rather tight for us anyway. The feeling with the new electronics and the new tyres must be developed lap by lap. The first tests of the season are always something special. You get back onto the track after a long break but it really only takes a few kilometres to reacquire the right sensations.”