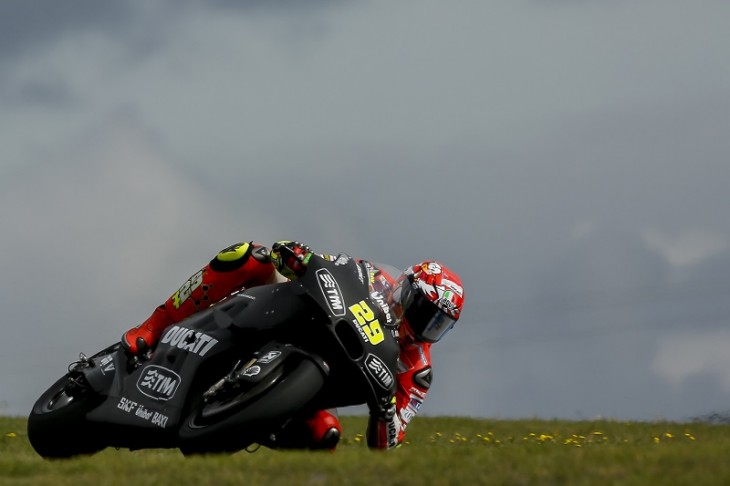 The final day of the second round of IRTA pre-season testing at Phillip Island allowed all the MotoGP riders to put in a good number of laps on the Australian track, despite an interruption of a couple of hours mid-session due to rain showers.

The two Ducati Team riders were able to lap without a break, continuing their set-up work with the new Desmosedici GP 2016.

Even though Dovizioso (1’29.860) was tenth in today’s classification and Iannone (1’29.860) twelfth, both factory Ducati riders were satisfied with the feeling with their new bikes and they managed to gather a lot of important information for the Ducati Team’s engineers and technicians.

Iannone classified tenth in the overall three-day standings, with a time of 1’29.857 set yesterday, while Dovizioso was eleventh with the best time he recorded today.

Following Tuesday’s team launch in Bologna, when the 2016 Desmosedici GP’s new livery will be presented in live streaming, the Italian team will be back on track again from March 2-4 at Losail (Qatar) for the final three-day test session before the start of the new season, scheduled for the weekend of March 20 at the same circuit.

“I am very happy again today because, even though we were unable to make use of all the time available, we did manage to carry out some important tests. It was actually easy for us to be quite fast, even though we’re still missing a couple of tenths of a second to get up to the top at the end of the day. However I am happy with my race pace because I have a good feeling with my bike, and going away from Phillip Island with this feeling was my aim, especially in view of the fact that this is a track where I have always struggled a bit. The aim now is to make a further step forward in Qatar in order to be ready for the race and be protagonists like last year.”

“In the end these tests at Phillip Island have been positive because we were able to test at length and understand the differences between the new Desmosedici GP and the GP15. This is a very important aspect because we were also able to find the direction to take in order to fine-tune all the details. Even though I am not entirely satisfied with my final position, I am pleased with the work that we have done and the steps forward we managed to make. We still have to improve however and we expect more, so the next tests in Qatar will be really important.”