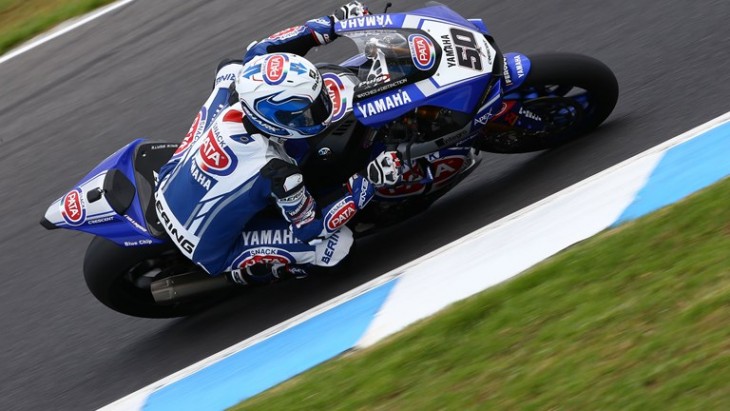 Sunshine and light showers provided mixed conditions for both hour-long free practice sessions but, seeming to master the inclement weather with ease, Guintoli confidently guided his WorldSBK-spec Yamaha YZF-R1 around the 4,445m layout. Concluding the morning sitting second with a fastest lap of 1’31.640, the Frenchman’s times continued to improve with the afternoon weather. Retaining a podium-worthy position for the majority of the final 60 minutes, he initially circulated in third before advancing to head the times as the only rider to break the 1’31 barrier – setting a 1’30.865 with 15 minutes remaining. WorldSBK’s new schedule sees Friday’s second practice times cement the 20 fastest riders’ automatic qualification into Saturday’s two Superpole sessions, with Guintoli holding the all-important provisional pole.

With less than a second separating the top 11 riders, Alex Lowes concluded his inaugural day on his YZF-R1 with a best lap of 1’31.825 but with the new schedule now in operation he will have to compete in the opening Superpole 1 to fight for his promotion to the top-12 shootout. Continuing to fine-tune his riding style with his new Yamaha machine, the British racer has a number of settings changes – including his own positioning on the bike – for his crew to adjust overnight. Saturday brings a shortened free practice – with timings not admissible for qualifying – before Superpole and the opening race of the 2016 season at 15:00hrs local time, but Lowes is confident his team’s hard work will be repaid for the 22-lap contest around one of his favourite tracks.

“I wasn’t expecting to be at the top of the times today but I’ll definitely take that! We have such a good base with the YZF-R1 even at the start of this project, especially the chassis and engine character, so it’s nice to know we can work up from here. We have spent a lot of the winter evaluating and assessing, and expected to be continuing this for the opening round at Phillip Island. This is my favourite track on the calendar so hopefully we can continue to improve as the weekend progresses and enjoy a good couple of races with the new split two-day schedule starting tomorrow.”

“I’m still finding my perfect set-up with the YZF-R1 so I wasn’t 100% comfortable out there today but the times are, as always, so close between the top riders. We have a few things we are working on overnight with the lads, and I love this circuit so I’m looking forward to tomorrow. Historically I’ve done well in practice here but it hasn’t translated to the race so hopefully this year a careful dress rehearsal will give me a better race day when it matters!”

“Nobody in the Pata Yamaha Official WorldSBK Team expected to be at the top of the timesheets in Yamaha’s first day back in World Superbike competition, but to achieve it is a great reward for everyone who has been working so hard on the project and it clearly demonstrates the massive potential of the YZF-R1.

“Phillip Island is Sylvain’s favourite track and the combination of his ability and experience, and the way in which he has adapted to the Yamaha, has resulted in a more competitive package at this point of the season than we expected. Congratulations to Sylvain and to his crew for a very solid day’s work, and whilst we have no fixed expectation in terms of what we can achieve on race day, we couldn’t have had a better start!

“Alex is less than a second from Sylvain’s best time but unfortunately that is 11th place, and there is work to do to find both the best settings for the YZF-R1 and for Alex to understand how to get the best out of the Yamaha here. Phillip Island is a very different race track to those we have used over the winter tests. We will work hard tonight, try to help him understand how to take the next steps forward, and look forward to Yamaha’s first race in WorldSBK since 2011, tomorrow!”