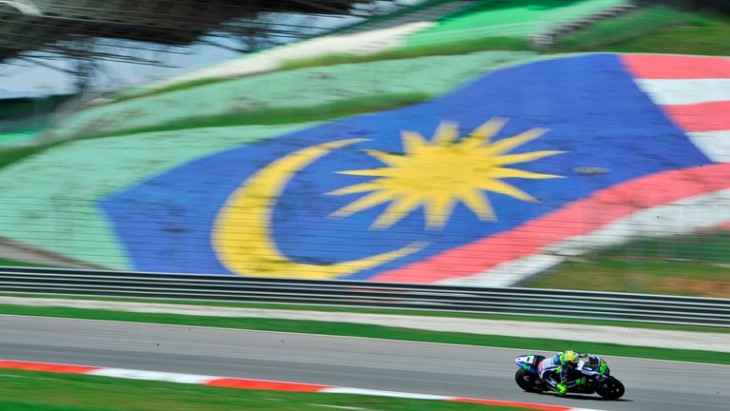 Movistar Yamaha Teammates Jorge Lorenzo and Valentino Rossi made their intentions clear whilst testing their YZR-M1s today at the Sepang International Circuit during the first Official MotoGP Test of the year, taking first and second place respectively.

After a two-month wait, the Movistar Yamaha MotoGP team assembled in Malaysia to kick off the new season with the first Official MotoGP Test of 2016.

Wasting no time, riders Jorge Lorenzo and Valentino Rossi immediately picked up where they left off, securing the top two positions.

Lorenzo arrived at the sunny and hot Malaysian circuit feeling slightly under the weather, but his mood changed as soon as he put his visor down and swung his leg over the new YZR-M1. He needed little time to move up to fifth place at the end of the first hour, before his smooth riding style took him to first position in the standings, which he held until the end of the session. With his pace proven to be as fast as ever, the Spaniard then decided it was time to test various options for the setting of his bike and ended the day 1.033s ahead of the rest of the field with a fastest lap of 2’00.684s.

Teammate Rossi was also eager to break in his new YZR-M1 and make clear he means business. He needed less than an hour to take over at the top of the provisional ranking order and with the muscles fully warmed he went on to focus on testing two different set-ups for his bike. Despite a short break when the session was red flagged due to a crash of Eugene Laverty, the nine-time World Champion was able to tick off most items listed on today’s testing schedule. He spent more time on track than any other rider, completing a total of 55 laps, and finished with a solid fastest lap of 2’01.717s for second place.

“Personally, I couldn’t wait to start testing, because of the new regulations and the work ahead of us. It is good to be back in action and we can be satisfied about today’s results. It has been a good first day, it stayed dry for almost the entire test and this allowed us to start working on different bikes. Today has been very positive, we didn’t come across any big issues and the riders are getting used to riding on Michelin tyres and the new software. They are getting to know the combination of the bike, the electronics and the Michelin tyres better and are growing in confidence each time they head out on track. We will study the data this evening and tomorrow we will proceed with our test schedule as planned.”

“I’m very happy and surprised about the feeling I had today with the Michelin tyres. The lap times were relatively easy to achieve and every time we exited pit lane we improved something on the bike to understand the electronics better and they adapted very well to the Michelin tyres. I’m very happy with the change, because Sepang, for me, is always difficult. Today I only slept two hours because of the jetlag and I have a sore throat so I’m taking antibiotics. My physical condition is not perfect, but to ride two or three laps, I can do that very well. If I was fitter I could do longer stints.”

“The gap to Lorenzo is too big, but it’s also true that he was stronger than everybody else, so he was able to have a better rhythm. On the other side, my position is not so bad and we worked a lot on the bike. It’s just the first day and the total count will be at the end of the third, but we have a lot of things to do. I’m quite happy because the electronics already work quite well. We’re not at the same level as last year, but it’s already good to ride the bike and especially the Michelin front tyre improved a lot, so the feeling when you ride the bike is more similar to last year. These are the two important issues. We had three bikes, but one of them was just meant for doing a few laps, it was the old one. We have two 2016 bikes and I did my fastest lap time on the bike that’s more similar to the 2015 model, so it’s a little bit half and half, but just because I didn’t have enough time to work on the 2016. I did only one stint and it wasn’t so bad, we will continue tomorrow and see. Our first issue for this test is to decide which one, so tomorrow we’ll try to get a better understanding.”

Tech3 pair back on track as 2016 preparation kicks off

Monster Yamaha Tech3 duo Pol Espargaro and Bradley Smith were back on board their Yamaha YZR-M1’s today at the first day of action in Malaysia as they rode their first laps of the year after the winter break which lasted for two months. Both riders eagerly began working on setting up this year’s Yamaha MotoGP bike together with the new electronics package and the Michelin tyres, with the opening findings being positive.

Pol Espargaro leapt straight into gear as soon as the opening shakedown began and he embarked on his testing programme, before setting a personal best of 2’02.646 on his 27th lap. Meanwhile, Bradley Smith finished the day three places behind his teammate, after tirelessly completing 55 laps as he collected vital information for the upcoming season. The hard work will continue tomorrow with both riders fully confident of making further steps forward and lowering their lap times.

“It has been a constructive start to the year. When looking at the time sheet it’s easy to see that we did not achieve anything special, but I can’t hide that my feelings are positive. We were able to try the new electronics for the first time and I am glad to say that it’s much better than we expected after what we heard from other people. Of course, we are quite far behind the other manufacturers and also Yamaha Factory, but I’m convinced that there is a huge margin of improvement to make which can do and the most important thing is that I like how I now have to ride the bike. It goes without saying that it will take us some time to make up the ground and also because we have less engineers than a factory team, but I’m confident that the Monster Yamaha Tech3 Team will do a good job. Also the new Michelin front tyres were a positive aspect of the day and you can really feel that they worked a lot on them. We had several front compounds today which all performed well and were absolutely safe. Beside the encouraging technical news, I’m also very pleased that my physical condition seems to be very strong, because even though we rode quite a lot of laps, I do not feel particularly tired. Of course, there are some muscles which we haven’t used since Valencia and for sure the hardest moments are yet to come, with getting up tomorrow morning being crucial, but already, I can’t wait to get back on my Yamaha. Today flew by and we still have a lot of things to test, so we’ll be ready as soon as the light turns green in the morning.”

“I am pleased to be back after what has been such a long break. I rode a lot of laps today and we did some solid work. Unfortunately I fell at the last corner, however in a strange way, I’m pleased to get my first crash of the year over and done with! It was my fault because I was trying to understand the front tyre, as it is a new style and we were intending to find where the limit is. I was experimenting with this in the hard braking corners and in the last turn I went onto the dirty side of the track and then unfortunately fell. Besides that, we had some small issues today, which forced us to make a few changes with the electronics as well as the engine. As a result, we lost a bit of time but I was still able to make a comparison between last seasons’ electronics and this year’s so now we have a clear indication of what we need to do next. Michelin have done a convincing job so far and they’ve brought two compounds of front and rear tyre that are working well here, so they’ve made a significant step from last year at the Valencia test. If you look at the Yamaha riders, it’s clear to see that Jorge and Vale are running well, but I’m sure that once we have had a bit more time with the 2016 electronics, we’ll be able to improve and climb up the rankings. Anyway, I rode 55 decent laps today and now we have a solid plan and a good base to carry on with in the next two days.”