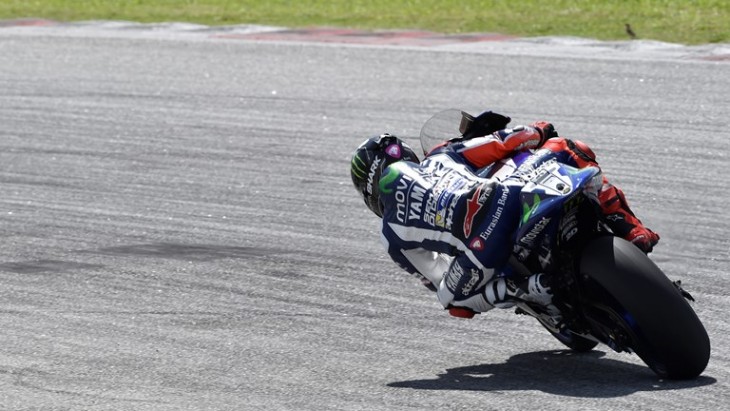 Movistar Yamaha MotoGP riders returned to the Sepang International Circuit today for a second day of testing in Malaysia. Jorge Lorenzo and Valentino Rossi continued to successfully work through a number of different test items and secured second and sixth place respectively in today’s standings.

The Movistar Yamaha MotoGP team continued to book progress during the first three-day Official MotoGP Test of 2016. After yesterday’s encouraging 1-2 finish, Jorge Lorenzo and Valentino Rossi were motivated to proceed with today’s scheduled testing and both riders improved their times compared to yesterday by over half a second.

Lorenzo once again set the pace early in the session, taking over the top spot in the provisional rankings on his third lap. Despite not feeling a hundred per cent fit, he kept a strong pace going and even a small crash in turn five, which left him unhurt, could not slow him down. The five-time World Champion was able to make big strides as his team tried to find the right combination for the 2016 YZR-M1, the new electronics and the Michelin tyres. He concluded the day securing second place with a best lap of 2’00.155, just 0.060s off today’s best time, which was set on a hard rear tyre after Michelin withdrew the soft spec rear tyre option as a safety precaution following a crash from Loris Baz.

Teammate Rossi also had a positive second day at the Malaysian test. As the session was red flagged for the majority of the morning following Baz’s crash, the Doctor was fully committed to making up for lost time. When he returned to the track he made a good step with his set-up and consistently improved his times, dropping under his best lap from yesterday by almost 0.7s. He spent the afternoon testing various tyre options and completed a total of 54 laps, setting a personal best of 2’01.021s for sixth place.

“We were glad to hear that Baz was OK, but unfortunately today’s testing has been influenced by his accident as we lost more than one hour due to the red flag on track. Then also Jorge’s crash didn’t allow him to finalise the plan we had in mind, but anyway Jorge managed to compare the two bikes he had available and to understand which way to proceed. On the other side of the garage Vale managed to complete his schedule working on the front tyres and his feeling at the end of the day was quite positive. Tomorrow he will only have to fine-tune the bike and then move forward with the race simulation. Jorge, once he will find the the good compromise with the balance of the bike in the morning, will also be able to prepare for the long run to get all the possible information we needed from this test.”

“Today, after Baz’s crash we couldn’t use the soft rear anymore, so I had to adapt my riding. It’s been a little bit difficult, but we still kept having a good feeling apart from the crash that I had with the hot track temperature and the hard front, which looks to be a little bit worse for me. In the afternoon, when we put in the softer tyre, I regained the feeling again that I had yesterday and was able to keep being the fastest rider on the track. Even with the hard tyre we could improve my time of yesterday by half a second, this is a good point. We keep having big margin over the rest and this is very encouraging.”

“I’m quite happy, it was a good day. At first it was hard, because there was a lot of work to do, but I’m quite satisfied, especially because we improved the setting of the bike a lot. My pace and my best lap improved quite significantly, so for this reason it’s been a good day. We have a lot of important new data that will help us decide which way we should follow. It’s sure that we will have a lot of things to do. I tried some tyres in afternoon, some were good, some things were bad, but I think also Michelin did a good job. At the moment I’m more on the bike that’s more similar to the 2015 model. Tomorrow we will try them both another time and maybe we will also try the other bike at another track, like Phillip Island, and after that we’ll decide.”

Monster Yamaha Tech3 team riders Bradley Smith and Pol Espargaro maintained their tireless efforts on the second day of testing in Malaysia with encouraging progress being made in all areas. As a result, both riders remain optimistic for the final day tomorrow.

Bradley Smith continued his thorough testing programme as he prepares for his fourth season in the premier class. The 25 year old completed the day with a lap that was impressively 1.9 seconds quicker than yesterday’s, and just two tenths back from 5th place. Whilst Pol Espargaro also took a step forward as he cut sixth tenths off yesterday’s personal best after setting the time on only his 6th lap. The young Spaniard unfortunately fell twice during the day, yet he wasn’t injured and keenly awaits returning to the track tomorrow.

“Today was constructive and I am pleased with what we accomplished, but we still need to do more tomorrow. We ran all day on hard tyres, which wasn’t our original plan yet, after using this compound at the end of the yesterday, we decided to carry on with it this morning and then finally, we were all forced to use the hard tyre after Loris Baz crashed. Anyway, we used the 2016 electronics all day and worked well on finding solutions to some of issues we have had yesterday and now I feel a lot more confident with them. For the race distance, we need to do a bit of work. Here in Sepang, it’s obviously hot and slippery so we have to focus on building a bike that is consistent for 20 laps. At the moment, my pace on one lap is quite fast but if the tyre starts to drop, I want to be able to feel a bit more comfortable than I do now. We also tried a couple of different chassis configurations today and gained some interesting information, but although we didn’t find anything better than what we have, we have a clear program for the future. Tomorrow we will see if we can do a race simulation. I would like to do a lengthy run in order to get some fitness as well as a good idea about the performance of the tyres and the electronics over a distance. So hopefully we can run for as long as possible and have another positive day to close the test.”

“The day had some positives as we continued our work with the electronics and definitely found some improvements, but having said that, we have to understand what caused me to fall twice at turn five. On the data we can’t see any difference compared to the other laps. I may have been slightly faster but altogether, and compared to the other Yamaha riders, I am not particularly fast there, so it’s difficult to understand what’s going wrong. We may have to adjust the setting for turn 5 or maybe even change the front tyre pressure. Anyway, we got a bit lost because if you crash twice, you always take two steps back before making a step forward again and it disturbed the programme we were trying to run. All in all, we can’t say it’s been the best of days, but there are still some solid positives to take and we have to find our way back tomorrow. Despite this, I am really confident that we can be strong again on the final day.”