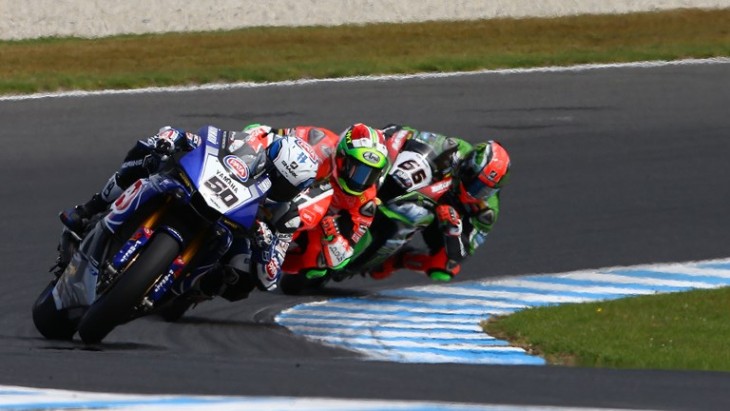 A solid start saw Guintoli circulating with consistent pace, holding seventh and maintaining contact behind the front group for the race’s first half. His ability to preserve the tyre life on his YZF-R1 allowed the Frenchman to pick up the pace with eight laps to go, diving up the inside of Davide Giugliano and Tom Sykes to take fifth on the 15th lap. Holding firm on the rear wheel of Nicky Hayden for the ensuing laps he consolidated the position at the line, collecting a further eleven points to place him fifth in the standings after the opening round of the 2016 championship.

Due to a crash in morning warm up, Lowes was forced to use his spare YZF-R1 for the main event. A strong start placed the British rider in fourth place during the first lap. However, a small technical issue with the untested machine prevented him from realising the potential shown throughout the latter part of the weekend. Running wide at the approach to Lukey Heights, Lowes dropped back to 21st by the close of the first lap but immediately began his fight back. A professional performance saw him regain seven places by quarter distance but with the gap too great to dent further he concluded the weekend with a 14th place finish, collecting two championship points.

The Pata Yamaha Official WorldSBK Team will now evaluate the data and experience gained from its debut race weekend as it prepares for the second round, at the Chang International Circuit in Thailand in just two weeks’ time.

“A really solid weekend for us and a strong start to the season here at Phillip Island. Obviously after the hype of the return of Yamaha and the new YZF-R1 in the Superbike World Championship there was a lot of expectation, but the reality is that we are still at the very beginning of the project. Like we said at the team launch a month ago, it is going to take some time to be able to win races but saying that, we’ve been a lot more competitive here that I thought we would be! We’ve been able to show some really good strengths, and also highlight where we need to keep improving, so this is very valuable data and experience for us as riders, for the team and for Yamaha. Because we have been so close to the podium and to the victory – with three seconds in race one and two seconds in race two – we are going to take this on board and continue to improve the whole package without taking away from the DNA of the bike. It is clearly a very good base for our first race, and the start of our championship campaign, so we will just continue to work from here and move on to Thailand in two weeks.”

“It’s been a difficult and disappointing weekend in terms of results for me, but overall there are a lot of positives to take. My knowledge and understanding of the YZF-R1 and how best to ride it have developed a lot throughout the week, as we have shown in the improvement from Friday practice through Saturday. I had good pace in yesterday’s race and a great start today, but unfortunately my crash this morning meant I had to roll out the spare bike for this afternoon and as it had only done two or three laps before this, there was a small technical issue that meant I couldn’t push as I would have wanted. That’s racing, and sometimes you just have to take the positives where you can, but I think we have many strengths to develop at such an early stage in the project and as the season progresses I will be pushing to achieve the best result I can for each and every race.”

“The first two-day race format for the Championship, and the comeback event for Yamaha, is done! We can be satisfied with the results for Sylvain. Always in professional racing we want ‘more’, but considering how early in the project we are and that the YZF-R1 has so much more potential still to be released a fifth place today – with a gap to the winner of only 2.4 seconds after 100km of racing – can only be viewed as a positive result.

“Alex and Phillip Island seem to have a love/hate relationship! He loves riding the track and is very fast, but somehow race day here always seems to go wrong. The problems today started with a crash in warm up, meaning we had to use the back-up machine for the race. After a strong start, Alex suffered technical difficulties on lap one and could have pulled in. The whole team appreciates his effort and professionalism to stay out and score points in very difficult circumstances.

“Thanks to our Yamaha colleagues for all their support – this first race has given us so much information. We know the strong and less strong points of the bike far more clearly now at WorldSBK level and we believe further improvements will result in the YZF-R1 becoming a formidable competitor.”