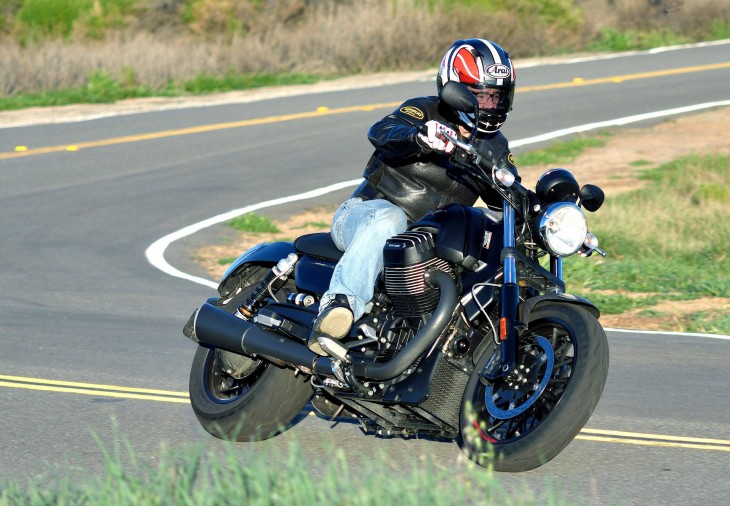 A few years ago, MD chose the Moto Guzzi California 1400 as its Bike of the Year, in large part due to the glorious 1380 cc 90° v-twin newly developed by the historic marque from Mandello del Lario. That engine has found its way into other models, including the subject of this test – the naked Audace. As we previously learned, this engine not only has the wonderful character Moto Guzzi powerplants are known for (including, but not limited to, the typical rocking to the right when blipping the throttle at rest, due to the twisting of the longitudinal crank), unlike some Moto Guzzis, it makes enough power to please performance enthusiasts. 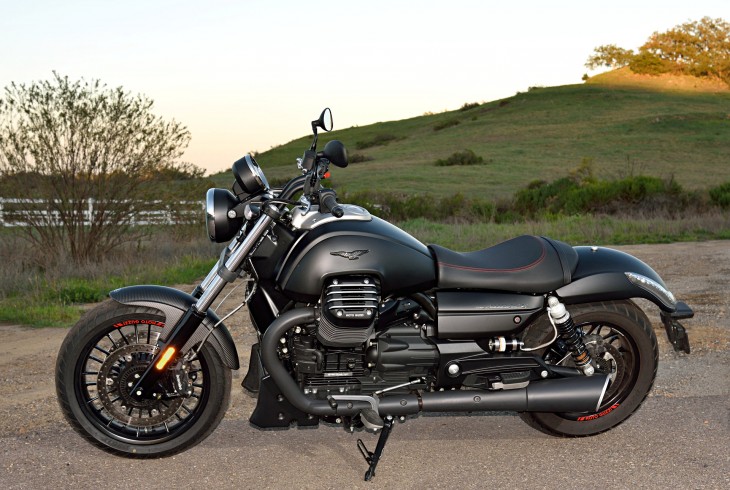 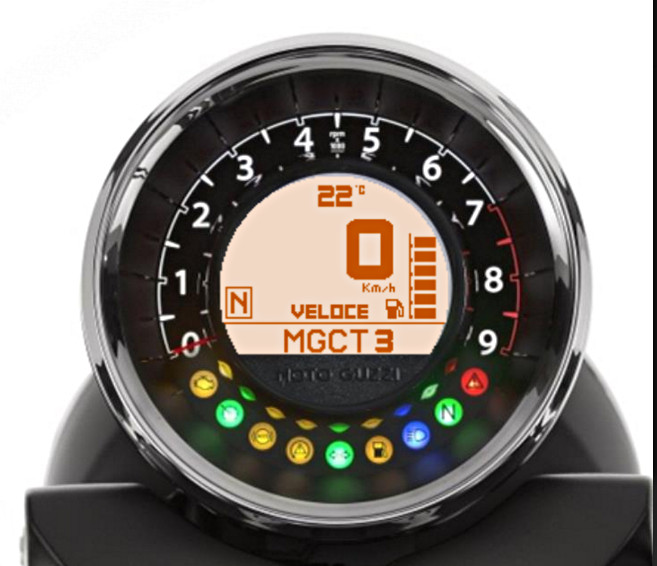 From below 3,000 rpm to 7,000 rpm, the Audace jumps every time you ask it to. Particularly, when the “Veloce” engine map is chosen (one of three available, in addition to Turismo or touring, and Pioggia or rain). Throttle response is very good, and improved from the California 1400, which could feel a bit “jumpy” when cracking the throttle in the Veloce (sport) mode. In addition to the greater power, the Audace’s engine is distinct from typical cruiser v-twins in its much quicker engine response (lighter flywheel effect).

Moto Guzzi considers the Audace a “muscle bike”, and the styling is meant to form this impression. Termed “ostentatious, muscular and fierce” by MG, the Audace looks like it means business. No excess plastic, the Audace expresses an aggressive attitude, right to the tip of its dual exit megaphone exhaust system. The carefully crafted details are there, as well, including the carbon front fender, classic MG tank badge, and the seat with contrasting red stitching.

The classic looking engine includes a very modern head design with four valves per cylinder and 10.5-to-1 compression ratio. Fuel injection with ride-by-wire throttle and the aforementioned three engine maps (Turismo offers full power, but softer throttle response than Veloce) are part of a very modern set of electronic aids. Adjustable traction control and dual channel ABS brakes are standard, together with cruise control. As an option, a Bluetooth module Moto Guzzi calls MG-MP allows the rider to connect a smartphone to the Audace (either iPhone or Android). After downloading either an IOS or an Android app (free from Moto Guzzi), you can access on your phone screen a huge amount of real-time data regarding speed, engine conditions, navigation information, stored routes, and even the maintenance manual for the Audace. Other functions include “Find My Bike”, which stores the Audace’s location when parked (in case you are suffering from a mild form of dementia – natural or liquid-induced), as well as an extensive data logger (including GPS information and vehicle data). 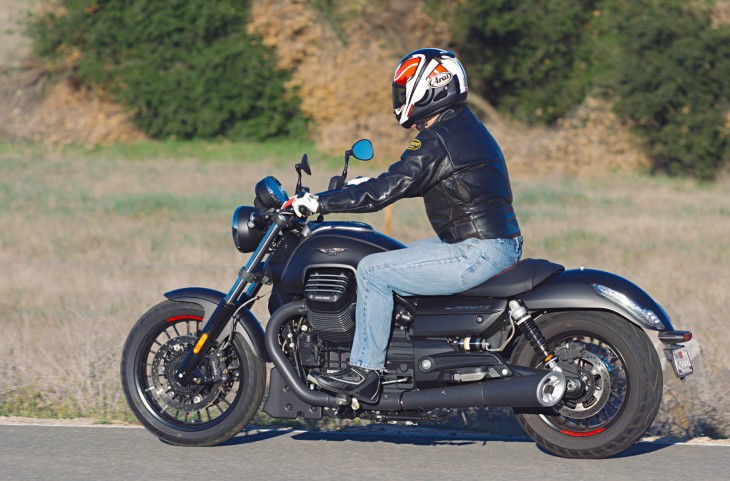 Special “elasto-kinematic” engine mounts further quell the vibrations from the already smooth 90° v-twin as it sends power through the six-speed gear box (sixth is an overdrive) and shaft drive to the rear wheel.

The seating position is somewhat between that of the typical “standard” or “naked” and a cruiser, with the footpegs a bit forward and a reach to the bars that creates a mild “V” shape in the rider’s body. The rider’s seat is comfortable, although the seating position places a bit more weight on the tailbone.

New steering geometry is intended to provide more nimble handling compared to the California 1400. Braking is handled by high-end Brembo four-piston calipers in front (squeezing two 320 mm discs) and a single piston operating on a 282 mm rear disc. ABS keeps the rider from getting into too much trouble with these powerful deceleration devices. The contact patches include a 130/70 x 18 front tire and 200/60 x 16 rear. Moto Guzzi claims the Audace weighs 659 pounds with its ample 5.4 gallon gas tank full.

Riding the Audace, you immediately realize you are aboard a Moto Guzzi despite the modern electronics, gear box and engine. The unmistakable, raw Guzzi sensations are there, although perhaps a bit muted in comparison to some of the older, two-valve models. The chassis feels stiff, and the handling is responsive, while the engine makes the bike just plain quick around town.

As with forward thrust, you never feel a lack in braking power to slow the big beast down. The gear box has some of the clunky feeling found in just about any big v-twin. The spread of available gearing is more than enough in light of the broad powerband. 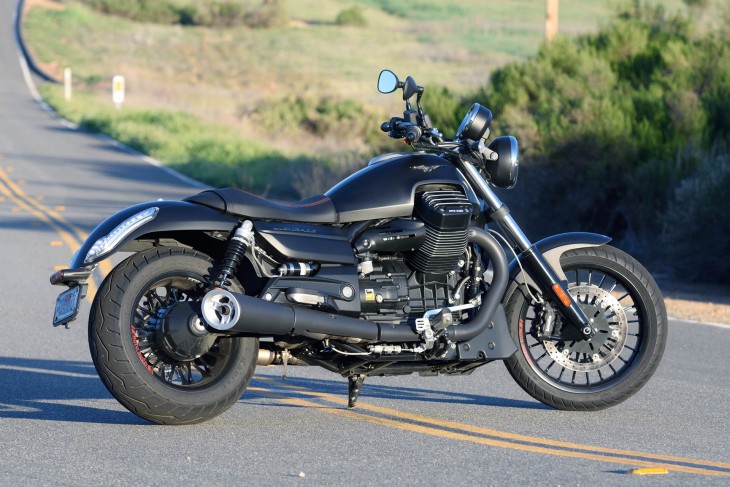 The looks, including the fat rear tire, give the Audace an attitude that its performance can easily back up. In addition to the generous go and “whoa”, the Audace handles well for a power cruiser. The fat rear tire makes the bike want to stand up while cornering (particularly, when trail braking), but not so strongly that the rider doesn’t get used to it rather quickly. Ground clearance is pretty good, but aggressive riders will find enough feedback to confidently drag the footpeg feelers on both sides.

With 4.7″ of travel at each end (only adjustable for spring preload and rebound on the rear shocks), the suspension does an admirable job of keeping the Audace under control. Damping feels pretty reasonable until you encounter a sharp bump at speed (such as a square-edged pothole), when the fork damping tends to seize somewhat and transfer a good jolt to the rider. The stout 46 mm forks help with steering precision and confidence when hustling the considerable mass of the Audace.

If you like power cruisers, and appreciate a full dose of Italian style and character, the Audace is a hell of a motorcycle. It certainly looks the part, and packs a surprising level of performance and sophistication. At an U.S. MSRP of $16,390, the Audace is available in the single Matte Black color shown. For additional details and specifications, visit the Moto Guzzi web site.