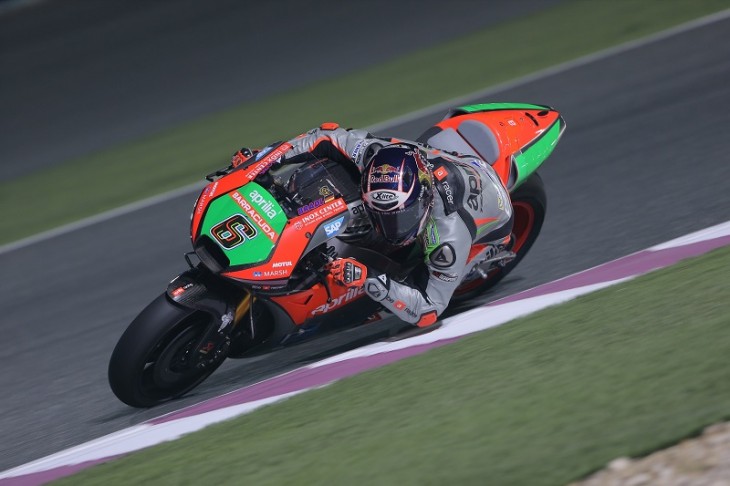 DÉBUT IN OFFICIAL TESTS FOR THE NEW 2016 APRILIA RS-GP

Losail (Qatar), 4 March 2016 – Three days of tests on the Losail track in Qatar marked the official début of the 2016 Aprilia RS-GP 2016, the brand new bike that Aprilia Racing will use to compete in the top category of Grand Prix Motorcycle Racing which, right here on this track, will start on 20 March.

For the official Aprilia Racing Team Gresini riders, Alvaro Bautista and Stefan Bradl, these were very important days. On the one hand, they are getting to know a completely new bike. On the other hand, they must immediately solve the inevitable growing pains and make the right choices straight away to reach a solid technical base from which to develop and increase performance. Besides this, there are many technical details that, being put through their paces for the first time, need to be fine-tuned. The first MotoGP bike ever entirely designed and built by Aprilia, beginning with the 4-cylinder engine in the exclusive narrow V configuration, confirmed the good feelings it had already given the riders straight away: the bike’s dynamic performance is decidedly better than the laboratory bike used last season. Acknowledged as “a real MotoGP bike”, the Italian machine has plenty of room for growth, improving with each outing and managing, in extremely tight standings, to put good times on the boards, considering the fact that this is its first real outing.

The three days of the latest IRTA tests, held at night prior to the racing début, had the 2016 RS-GP machines putting in a total of 210 laps (106 for Bautista, with a fastest time of 1’57.043 and 104 for Bradl with a time of 1’57.340), alternating, especially on the first two days, with frequent stops in pit lane required by the many modifications that naturally need to be made on a newborn bike on testing days.

ROMANO ALBESIANO (Aprilia Racing Manager)
“These three days, and particularly today, were really very important and positive for us. We did a lot of work, managing in the end to put in a good number of laps with both riders. This is what we need to grow a project that has just taken its first steps. I am quite satisfied with the consistency Alvaro achieved in the final outings with a used tyre, performance that makes me relatively optimistic for the maiden race. Maybe we were lacking a bit on the fast lap with both Alvaro and Stefan, but that definitely was not our objective. We are leaving Qatar with a lot of information that we will need to translate into action from now until the race, working night and day if necessary”.

FAUSTO GRESINI (Team Manager)
“The results of the tests are definitely positive if we look at how we did – especially on this last day – without any miles under our belts, without experience on this bike. I like this project a lot and I like the very small engine. Aprilia Racing did a really great job and it is a huge step forward compared to last year’s bike. This is a fledgling project and these are the first real miles that we’ve ridden, so it is clear that we’ll need time to sort out a lot of small issues before we can begin to develop it to be able to really push”.

ALVARO BAUTISTA
“Basically these were the first real three days with this bike since the private tests last week were used to sort out the bike and verify that everything was working properly. Now we are getting to know the bike, thanks in part to the many small changes that we have consistently made to see how it would react. Today I gained confidence and we were able to lap a lot and get a very positive feeling because the more laps I took the more I improved, becoming more and more comfortable with the bike. This is a very important aspect because we are still far from 100% and we have plenty of room for improvement. We are on the right path. The bike is lighter, it has better traction, it is more stable and it is a lot more nimble in direction changes. We need to continue on this path, even in the first races where we’ll have the chance to continue working on comprehension and development”.

STEFAN BRADL
“The last day was really productive for us. I was able to put in a lot of laps without running into those small problems that often slow down work on a completely new bike. I also got in various sessions with a several laps in a row to prepare for the race weekend and everything worked rather well. We focused above all on the front end of the bike to improve the feeling, managing to find a few benefits, but unfortunately we didn’t have the time to work on the rear, so we’ll start from there during on race weekend. We are on the right path. Now we just need to stay calm and keep working this way”.