Motorcycles could help prevent the spread of the dangerous mosquito-borne Zika virus by attaching a special citronella can to the end of their exhausts.

The Thai branch of worldwide advertising agency BBDO has come up with the idea to create Moto Repellent and is helping local charity Duang Prateep to spread the word … and the smoke.

The can is filled with citronella oil which turns to smoke when the exhaust gets hot, keeping mosquitoes at bay for up to 3m.

I’ve seen citronella explode near a naked flame, so it may have some safety concerns.

There is also the pollution problem of adding citronella smoke to the already abundant motorcycle and scooter exhaust and choking two-stroke fumes. 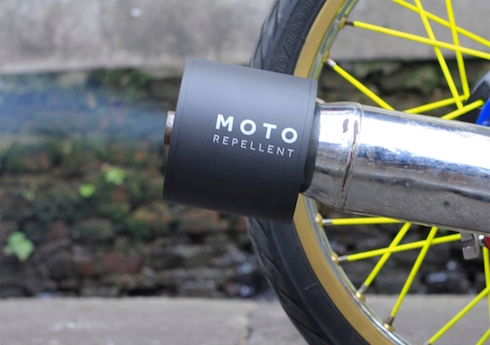 However, it seems the people of Thailand are more concerned about the fact that the humble mosquito is spreading dengue fever. Cases more than doubled in the country last year.

While Zika isn’t the driving force for the idea, the repellent may also help to reduce the spread of the virus which causes birth defects.

Apparently, the Duang Prateep Foundation wants to raise money so they can spread the repellent around the country.

If there are no side effects, such as bikes bursting into flames, perhaps this device could soon spread to other countries, particularly Asian, Africa and South and Central America where two-wheeled transport is dominant and mosquito viruses are rampant.

You can donate online to the work of the Duang Prateep Foundation by clicking here.