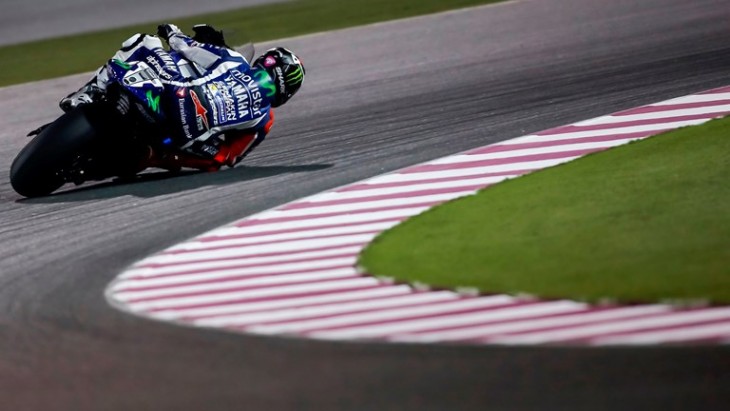 Movistar Yamaha MotoGP’s Jorge Lorenzo and Valentino Rossi completed the second of the three days of testing in Qatar today that mark the final official test of the 2016 MotoGP pre-season schedule. The teammates once again put in long hours as they diligently worked on the settings of their bikes and finished the day in third and eighth place respectively.

Movistar Yamaha MotoGP riders Jorge Lorenzo and Valentino Rossi were again out on the Losail International circuit in Qatar, putting their 2016 YZR-M1 machines to the test as they continued to look for the ideal balance to use the new Michelin tyres and the new electronics to the fullest.

Despite the dirt gradually clearing from the track, Lorenzo struggled to find traction during today’s session, though this barely slowed him down. He impressed by setting a fastest lap early on before continuing his hunt for the perfect set up. He completed the second day with a 1’55.535s lap for third position, less than a tenth of a second from today’s fastest time.

Teammate Rossi was the first rider to head out on track today and quickly moved to the top of the time sheets. He then turned his focus to testing some new items. As the restrictive tyre allocation didn’t allow him to do a time attack, he was unable to improve on his best time from yesterday. The Italian settled for eighth position with a fastest lap of 1’55.947s, a little more than half a second from today’s leader.

Tomorrow will be the final day of testing for the Movistar Yamaha MotoGP team before the start of the MotoGP season. The crew and riders are looking forward to returning to action and is delighted it will defend its MotoGP Triple Crown with the support from, as of today, more than two million Facebook fans on its official page, facebook.com/yamahamotogp.

“After some very positive results yesterday, we had some unexpected difficulties today finding grip. It’s been a different scenario to work with and therefore we mainly focused our attention on the bike’s setup and the electronics. The quantity of the front tyres was a bit tight for the testing we had originally planned, so instead we mainly worked on the balance of the bike as opposed to doing a time attack. We also tested some new items that were a part of today’s scheduled testing programme. Tomorrow we will continue to fine-tune the settings based on the results we got today and we will follow this up with a time attack as well as a race simulation.”

“Today it has been a little bit more difficult for us to go faster than yesterday, because the track seemed a little more slippery. We tried many things to solve the electronics and the tyres and, although we didn’t make any big improvements, we’re still in the top three, that’s a good thing. I also did longer stints to understand the behaviour of the bike after some laps, so I’m satisfied because I could keep a higher pace during more laps than yesterday.”

“The second day was OK, I worked a lot and did a lot of laps because we have quite a lot of work to do. In the end my performance was not fantastic in the lap and the position because I’m a little bit worse compared to yesterday, but in reality we didn’t do a real time attack because we tried to save some tyres because it’s important for tomorrow. We don’t have a lot of tyres, so we’re trying to manage. I think tomorrow will be very important for trying to understand our potential in a better way and especially for trying to improve the lap time and also for making a long run and try to understand our pace.”

Determined Tech3 duo power on in day 2 at Qatar

Monster Yamaha Tech3 team riders Pol Espargaro and Bradley Smith pushed on and continued their preseason work in the penultimate day of testing in Qatar. The pair carried on refining their Yamaha YZR-M1 MotoGP bikes in preparation for the all important 2016 season opener, where they aim to battle for the leading satellite position.

Pol Espargaro stepped his efforts up today and produced a lap that was over half a second quicker than his personal best from yesterday, whilst the overall top time was not lowered significantly. This was despite suffering with a crash at turn 15 that fortunately did not injure him, yet his progress today leaves him confident of advancing further tomorrow. Meanwhile, Bradley Smith wisely decided to preserve his tyres for the final session, where he will attack at full speed. His time of 1’56.517 from yesterday leaves him in 14th in the combined standings and tomorrow he aims to close his preseason campaign strongly.

“We are improving step by step every day, but the main thing is, I’m ok after the crash. It was a front-end crash like we had at Phillip Island and we were testing a new, different compound. It was an option to try, but maybe I pushed too hard. However, we can say that it’s not the compound that we like the most or one that we want to use at the race weekend here. I felt that we had chatter and movement, like some other riders. Yet, the other tyre is not so bad. I did 26 laps with it, which is more than a race distance and the rhythm was consistent plus, I felt comfortable. Apart from that, everything is ok and we worked on my lines, the rhythm and with the electronics. Every time we run, we learn a bit more about the electronics and we are trying new things all the time. In addition, we focused on the tyres quite a lot but we still need to get more rear grip. At first, I thought the dirty track may have been behind the lack of grip, but that’s not the case, so we need to improve in this area, which will be our main target for tomorrow and we may run a race simulation as well. Yet, as a whole, we are improving and moving forward.”

“It goes without saying that today has been a little bit frustrating. We found ourselves in a position where we don’t have a lot of tyres available to us that work with my riding style and my bike. At the start of the session, we began with used tyres from yesterday just to see their character after having been heated up twice and I have to admit that I felt quite comfortable, but this was our first run. Later on the second stint, I wanted to try some new tyres so we put a slightly harder compound on with a new rear. In all honesty, I found it really tricky to ride close to a solid lap time. So, after pitting and assessing the situation as well as listening to other riders’ feedback, I decided that the best thing to do was to save our good tyres for tomorrow and put our efforts in then. The plan is to do around 60 laps and we’ll have to focus all of our energy into getting the maximum from the final session. Anyway, the general feeling that I had with the bike in the first run was positive, so we’re not far away from where we want to be. After some work tomorrow and hopefully a race simulation, we’ll be ready for the first GP of the year.”