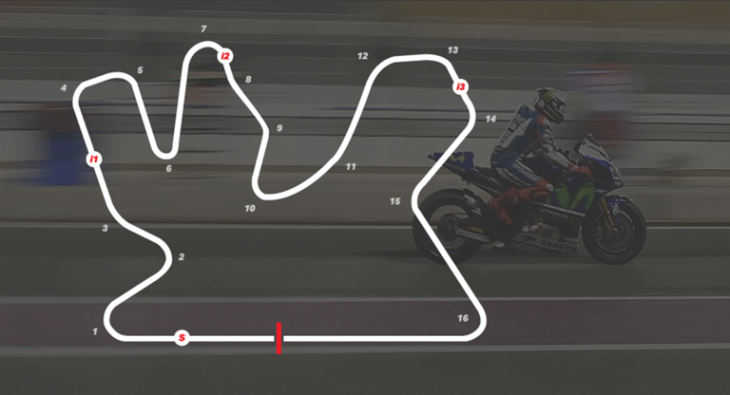 The wait is finally over for MotoGP fans! The Movistar Yamaha MotoGP team has arrived in Qatar to kick off the first MotoGP Grand Prix of 2016 this weekend under the famous floodlights of the Losail International Circuit. Riders Jorge Lorenzo and Valentino Rossi return to the 5.4 km track where they completed the final pre-season test two weeks earlier feeling ready to bring the heat to another highly anticipated MotoGP season.

Energised from the positive results during the winter tests, Movistar Yamaha MotoGP’s Jorge Lorenzo and Valentino Rossi are in great physical form and eager to take the 2016 YZR-M1 to the track. Both riders proved to be on the pace during pre-season testing and are expected to once again be key protagonists for this season’s title challenge starting with the Commercial Bank Grand Prix of Qatar.

Returning to the premier class battlefield as the reigning World Champion, Lorenzo looks forward to getting back into the racing mindset after months of testing. Last year he bravely fought his way to fourth place in Doha despite problems with his helmet impairing his vision. This time he returns with full confidence and is looking forward to battling as one of the top contenders for the victory. The triple MotoGP World Champion previously secured a win in the premier class in Qatar in 2012 and 2013. He also claimed second place in 2008, 2010 and 2011, and secured third place in 2009.

Teammate Rossi is also looking forward to riding at the Losail circuit and plans on making a strong entrance to the season like last year when he secured a brilliant and hard-fought victory. The Doctor felt very comfortable with the new Michelin tyres and electronics during the winter testing and is confident his hard work will pay off as he aims to further improve his already great record of four wins in 2005, 2006, 2010 and 2015 and four second places in 2007, 2009, 2013 and 2014 in Qatar.

The Losail International Circuit was added to the MotoGP calendar in 2004 and became the first and only circuit in MotoGP to host a night-time Grand Prix four years later. Built on the outskirts of Doha, the track has a good mix of medium and high-speed corners, of which six are left and ten are right turns. The flowing midsection of the circuit forms a strong contrast to the iconic, over a kilometre long, main straight that ends in a steep first corner where fans can expect a lot of racing action as the MotoGP riders fight for the first win of the season.

“After months of preparing we have finally arrived at the start of the 2016 championship. We have been looking forward to kicking off the season for a very long time, especially after our positive test results at the Losail International Circuit a fortnight ago. Vale and Jorge are in great physical shape and they can’t wait to start racing again. The first few races will be particularly interesting as they will give an impression of which teams and riders have found the best combination with the new tyres and electronics. The competition might be the closest ever in the history of MotoGP, but we are confident we will be able to give the Yamaha fans as much reason to cheer as we did last year while we try to defend our Triple Crown. Our supporters can look forward to a thrilling race for the first round and an equally exciting new season. Let’s start the show!”
Jorge Lorenzo

“The pre-season is over and the real action will kick off under the floodlights of Losail. All of us are eager to start the true competition. The winter was so long and testing has not the same feeling as racing. I feel very strong and arrive very confident to this first match of the season. I’m happy I adapted quite well to the Michelin tyres and we proved it during two of three tests. However we need to keep our feet on the ground because until Sunday the points are not distributed so we have to work hard from Thursday on to get a good position and then demonstrate our strong pace in the race. I would like to start this 2016 season in the best way possible, especially compared to the beginning of 2015. Let’s go into this race fighting and enjoy it!”
Valentino Rossi

“Finally we start talking about racing! I’m very glad that a new season begins. Our tests were definitely positive, but the race is another thing. During testing we’ve learned a lot about the new tyres and electronics, but there are many other things to discover and this first race will be really important to understand the real potential of the bikes and the riders. Last season for me began very well. I don’t know if I will be able to repeat that result but I will try to get on the podium for sure. It will be important to start to work well from the first sessions and get ready and have clear ideas going into the race. I feel ready and motivated and so does the team, so let’s go!”

The Monster Yamaha Tech3 pairing of Bradley Smith and Pol Espargaro look towards the highly anticipated season opener at Qatar fully confident as they intend to kick off their 2016 campaigns with two solid results. The FP1 fight begins at 19:55 local time on Thursday, with both Tech3 riders determined to battle to strong finishes in Sunday’s race at the first of the 18 rounds.

Bradley Smith will aim to hit the ground running as he aims to follow up his positive efforts in the pre season with a strong finish. Whilst Pol Espargaro will be gunning to be right in the mix with his teammate for a top six result in order to get his third year with the Monster Yamaha Tech3 Team off to a solid start.

“The winter months have passed, so now it’s finally time to switch on to race mode and get ready for the first GP of 2016, which I am very excited about. We’ve had a really constructive off-season, which kicked off in Malaysia and despite the tricky weather there, as well as later again at Phillip Island, I feel we completed a lot of valuable work. This is just what we needed before the start of what will be a very competitive year. I intend to continue from where I left off last season, but I am under no illusions that it will be any less competitive than last year. Still, we have taken every necessary step to be prepared and I’m feeling optimistic about my chances. This GP is always unusual due to it being at night and also over four days, but I am confident of starting strongly in FP1 and then go from there. It will great to be back racing again and I can’t wait to get going.”

“Finally, the winter is over and we can get back to doing what we love to do best – MotoGP! I am more determined than ever about this year and it will be a very important season for me as a rider. I’m happy to be part of the Monster Yamaha Tech3 team once again and I intend to make everyone proud in 2016 after the difficulties that we had to face last year. The winter tests were a bit different this time because we had to adjust to our updated Yamaha YZR- M1 but also get used to the Michelin tyres and the new electronics. However, I am feeling confident about all of these aspects after the thorough job the team and I did in February and earlier this month. Although the bike is not quite 100%, we are close and I am particularly confident of our race setup this year so I’m sure I can fight to some strong results. I will give my all at the first GP to start the season with a positive finish. The time has come and I’m ready for the contest.”