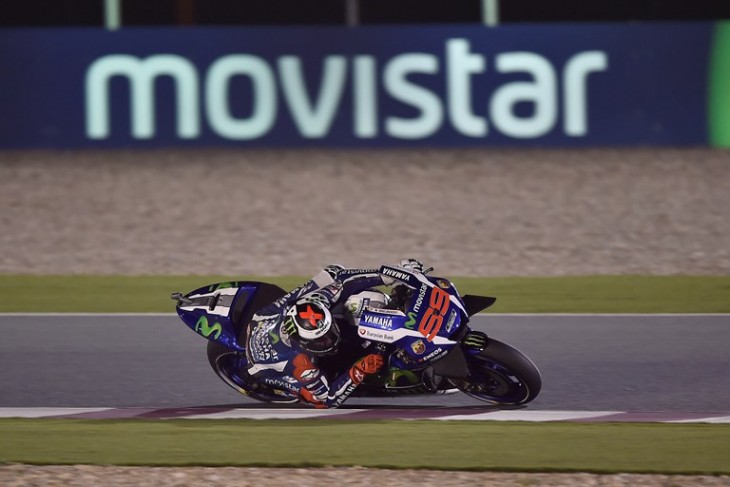 Movistar Yamaha MotoGP took its first strides towards the 2016 MotoGP title challenge today at the start of the Commercial Bank Grand Prix of Qatar. Riders Jorge Lorenzo and Valentino Rossi made their intentions for the new season clear in the first free practice session of the season under the scenic floodlights at the Losail International Circuit, securing first and second place respectively.

After positively concluding pre-season testing a fortnight ago, Movistar Yamaha MotoGP team’s Jorge Lorenzo and Valentino Rossi returned to the Losail International Circuit today to officially start the 2016 MotoGP season. As if the winter stop never happened, the teammates instantly fell back into their old groove and placed their YZR-M1s 1-2 in the ranking order.

Lorenzo felt confident and in a good physical shape after completing pre-season testing and his eagerness to get back into ‘racing mode’ didn’t go unnoticed at this evening’s free practice session once he hit the track. Having given the field a ‘head start’ to be guaranteed some clear space on track, he left his box as the second to last rider and immediately shot to the top of the leader board with his first flying lap. The Majorcan continued to set the bar high, dropping a 1’55.693s, more than 0,6s faster than all his rivals, around the midway stage of the session. As the pace picked up during the end of the session, the reigning World Champion responded almost with ease and wrapped up the proceedings with a best lap of 1’55.440s for the provisional lead in the standings.

Rossi was also not shy in claiming a key protagonist position in the first 45-minute practice session. Similar to his teammate he left his departure from pit lane late, but was quick to turn up the heat as soon as his tyres were warmed up. Fully focused on getting his setting exactly to his liking, he worked on the balance of the YZR-M1 with the new electronics and Michelin tyres and gradually moved up the timesheets. He ended the day with a long stint during which he skillfully made the traffic on the track work to his advantage. climbing up to second position as the session came to an end and finishing 0,267s from the leading time.

As Sunday’s race will be held at 21:00 (GMT+3), the format of the race weekend has been changed to enable the riders to be fully prepared for the night event. There will be a second and third free practice session held tomorrow evening.

“The new MotoGP season is now well and truly underway and we can be very satisfied with the results of today’s first free practice session. Whenever we arrive at this track it takes a few sessions to get the initial dust and debris from the desert off the track, but today the conditions and level of grip were OK. Jorge started the season where he left off the previous year and showed his fast and consistent pace throughout the whole session. Vale was also fast right from the get go and his motivation showed in the lap times. Though there are still areas of the setting that we aim to improve on, we will try to sort this out before tomorrow’s FP2.”

“I had a good start. From the first run I was able to have the best lap time and probably also the best pace, but we still have a margin for improvement both in lap time and pace. We will keep working on the setting and the electronics to improve in some areas for tomorrow. The track will also be better with more grip level tomorrow and the lap times will be faster.”

“The first practice was positive. I’m quite satisfied, it was a strong way to start the season, because the second position is good and also the lap times are already not so bad. They’re in the 1’55s and the pace is quite good. We start working from what we did in the test. This means that we did a good job during pre-season and we begin with a good base, but now we have to keep focus. The condition of the track changes a lot session by session and together with the team we have to deliver good work so we will be ready when the grip becomes better. I’ll try to improve the feeling and also try to make the right decision for the tyres.”

The Monster Yamaha Tech3 Team riders Pol Espargaro and Bradley kicked off their 2016 campaigns and hit the track with instant speed in the first shakedown in Qatar as they began setting up their Yamaha MotoGP bikes for Sunday’s first round battle.

Pol Espargaro wasted no time in getting straight on the pace as he aims to win the fight for the leading satellite rider battle this year. The young Spaniard lapped the track 18 times and set his personal best on the final run which left him in 6th, just three tenths back from third, marking a promising start to the weekend. Meanwhile, Bradley Smith leapt into gear as he confidently began the 2016 season and after consistently gaining speed, he set his fastest time on his 13th lap whilst aiming to improve further. Yet, a small crash at turn 13, close to the end of the session, prevented Smith from ascending any higher. However, the young British remains fully confident of bouncing back strongly tomorrow.

“It definitely feels good to open the weekend in this way, even if I was a bit nervous at the start of the session. I had a small issue with one of my gloves, which disturbed my concentration and I really wanted to set a fast lap time straight away. Yet, due to this, I wasn’t really relaxed so I came back to the garage, to calm down before going out again. After that, I tried to remember every single detail that we focused on during the test, corner by corner, and then things got a lot better. By the close of the session, we were able to post a good lap time on used tyres and I feel confident for tomorrow. Still, we have a large margin of improvement to make, but overall I’m feeling satisfied and looking forward to the next sessions.”

“It was a positive start to this Grand Prix, but it was really unfortunate to end the first night with a crash. I felt very comfortable and confident with the Yamaha along with the hard Michelin tyre and I did a long run at the beginning of the session. We then changed to the tyres that I preferred to use at the test here, and unfortunately, I made a small mistake in turn 13 which caused me to lose the front. Anyway, for me it was vital to get the data about both tyre options during the first night, in order to have a clear direction to follow for the remainder of the weekend. We will continue to push forward inside the top ten, because I am convinced that without the crash, I could have ended the session there. This is a good step forward compared to the test, so now we will repair the bike, check the data and come back a bit stronger tomorrow.”