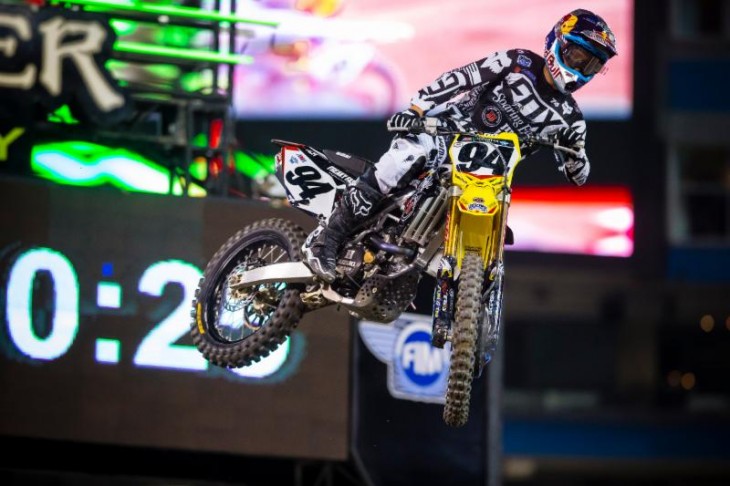 ELLENTON, Fla. (March 15, 2016) – While RCH Soaring Eagle/Jimmy John’s/Suzuki Factory Racing’s Ken Roczen enjoyed the spoils of victory at the previous stop of Monster Energy AMA Supercross, an FIM World Championship, defending 450SX Class Champion and current points leader Ryan Dungey continued his historic start to the 2016 season, setting a new all-time mark in consecutive podium finishes. The top two riders in the championship will lead their field competitors into this weekend’s annual visit to Detroit’s Ford Field for the 11th race of the season, this Saturday, March 19. In the Eastern Regional 250SX Class, three different riders have stood atop the podium through the championship’s first three races.

Some facts and insights to watch heading into this Saturday night’s race include:

Red Bull KTM’s Dungey has enjoyed his most successful start to a Monster Energy Supercross season in 2016, finishing no worse than third through the first 10 races of the championship. That podium consistency dates back to last season, where it played a major role in his title-winning campaign. Last Saturday night in Toronto, Dungey’s consistency reached historic levels with his 26th consecutive podium finish, setting a new all-time record that we previous held by Monster Energy/360fly/Chaparral/Yamaha Factory Racing’s Chad Reed from the 2003 and 2004 seasons.

Roczen’s win was arguably his most impressive outing of the season and it came at a much-needed time. After positioning himself in third off the start, Roczen marched his way into the lead by the second lap, passing Dungey for second and Monster Energy Kawasaki’s Eli Tomac for the lead. He set a strong pace to open a comfortable lead, which he managed through the entirety of the Main Event. It was the German rider’s third win in the last six races and comes after enduring through sixth and fifth-place finishes over the past two weekends. Roczen, who sits second in the championship standings, needed a strong outing and a momentum shift in his favor to reenergize his hopes of challenging Dungey for the title. As a result, 34 points separates the two riders heading to Ford Field.

“It was an awesome race, the conditions were tough and my bike worked flawlessly,” said Roczen. “This is my first win in Toronto, so lets see if we can keep the ball rolling heading into Detroit next weekend.”

Dungey appeared to have another runner-up finish all but secured until a rare mistake put the points leader on the ground in the closing laps, and caused him to lose the position to his Red Bull KTM teammate Marvin Musquin. It resulted in Dungey’s worst finish of the season, a third, and ended his streak of top-two finishes at 20 races.

“I had some time to make up on Kenny [Roczen], but washed the front end while trying to make a push,” said Dungey. “From there I did the best that I could and was able to come away with a podium.”

Musquin is on a hot streak of his own, finishing on the podium in three straight races, highlighted by a pair of runner-up results. He’s moved up to sixth in the 450SX Class point standings.

The Eastern Regional 250SX Class Championship has opened up to incredible racing and heavy parity. In Toronto, Troy Lee Designs/Red Bull/KTM’s Justin Hill raced to his third career victory, emerging from the fray in a wild Main Event that saw several of the top contenders involved in a first-turn pileup. Adding to a dramatic shift in the championship standings was the absence of entering points leader and Rockstar Energy Husqvarna Factory Racing rider Martin Davalos, who did not race due to personal reasons.

“This [win] is a big deal for me. It’s been a while since I last won,” said Hill. “It was a very difficult track and I was lucky to get through the start clean and bring it home.”

While Hill enjoyed his first trip to the top of the podium since the 2014 season, Yamalube/Star Racing Yamaha’s Jeremy Martin walked away with the points lead following an impressive come-from-behind effort that saw him come from 19th to the runner-up spot. Martin was one of the riders involved in the first-turn incident.

“The laps and hard work during the week paid off tonight,” said Martin. “We were able to move forward after the crash, which helped us leave with the red plate. It’s a bummer Davalos was unable to race tonight.”

As a result of missing the race, Davalos dropped from first to fourth in the championship standings and now sits 20 points behind Martin. Hill is now second, with GEICO Honda’s Malcolm Stewart third.

Tickets are available at the Ford Field Box Office and online at www.SupercrossLive.com. Practice and qualifying begin at 12:30 p.m. and the Main Event starts at 6:30 p.m. Tread Head seats start at $15.