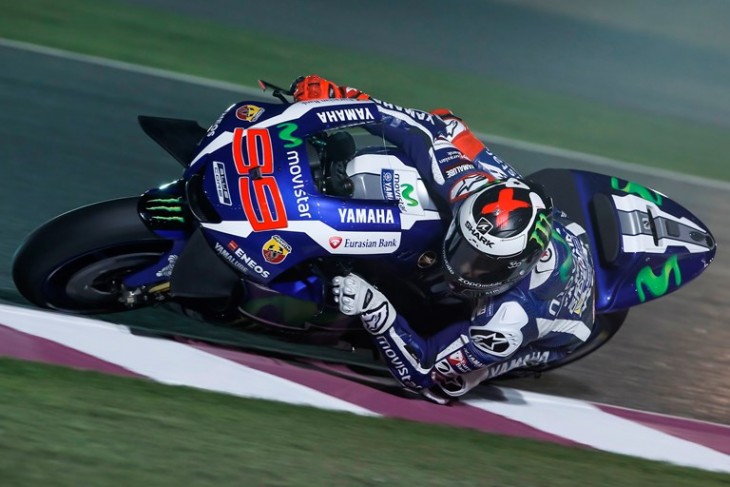 The Movistar Yamaha MotoGP Team concluded the final day of Official Testing at the Losail International Circuit in Qatar with strong results for both sides of the garage. Jorge Lorenzo let his consistency see him through and set the fastest time of the day, claiming top billing in the combined time sheets. Valentino Rossi also kept his key protagonist status elevated as he finished his pre-season campaign with a positive fifth place in today’s ranking order, leaving him in the same position in the combined times.

Today Movistar Yamaha MotoGP riders Jorge Lorenzo and Valentino Rossi completed the third and final day of the final Official MotoGP Test of the 2016 pre-season. In contrast to previous testing opportunities, over the last three days both riders were able to enjoy a good amount of dry track time and were able to work through a number of potential new items for the 2016 YZR-M1.

Lorenzo delivered his trademark top-level of focus from day one and never strayed far from the front. Today the Mallorcan hit the top of the running order once more when he dipped under the Circuit Record Lap of 1’55.153s with a 1’54.810s lap and became the only rider to go under the 1’55s over the entire three-day test. He went on to complete a long run this afternoon to wrap up the test in first place in the combined standings with a 0.516s margin over his closest rival.

Teammate Rossi continued his strong form during pre-season testing as he laid a final hand to the setting of his YZR-M1. After a small crash in turn ten, which left the Italian unhurt, he improved on his fastest time set on the first day by nearly half a second, posting a 1’55.429s, and finished the day in fifth place just over 0.6s from teammate Lorenzo. Thanks to the progress he made today he also secured fifth position in the combined times, leaving him in a strong place to start the 2016 MotoGP season at the first round in Qatar from March 18th – 20th.

“The last three days have been really important, so we are happy the whole test has been positive. Today we were able to finalize the settings before the race simulation and time attack, exactly in the way it was scheduled in our testing planning. Apart from Valentino’s minor crash in turn ten everything went smoothly. Jorge’s fastest lap and both riders’ race simulation pace gives us a good boost in confidence for the first Grand Prix. Overall we are satisfied about the results and performance we displayed over the last three winter tests where we have been consistently fast. We are very content with these results and we feel ready for the start of the season in two week’s time. Our target is to start the season in the same fashion we began the championship last year.”

“It was a very positive day, because we improved our lap time a lot and we did a complete race simulation, that has been very good because I did a few laps in the 1’55s even with not the best front tyre. With the softer one, with which you could be much faster, we had some graining. This tyre will probably not be available in the race weekend, because Michelin is planning to change its tyre allocation to one tyre that’s a little bit harder and one that’s not so hard as the one I used for the simulation. With the intermediate tyre on the front I could have been even faster, so I’m happy with the fastest lap time and the simulation and we are ready to be competitive for the race.”

“In the end I’m quite happy. Unfortunately I had another crash in the same corner, but it was a small one and I was able with the team to try everything. In the last hour and a half we improved the setting and I had quite a strong pace and did a good time attack. The lap time is not so bad and more importantly I did a race simulation and I was strong. I think that it will be quite tough, because it seems that from the first test the other bikes improved a lot, but now we are there at their level. I think a lot of riders can be fast for the first Grand Prix, but we are competitive. The problem was that the track improved a lot day by day and the stress on the front tyre increased, so we had to move. Yesterday was not so bad, but today’s was too soft. I think the last five laps of the race will be difficult for everybody, but the bike is good to ride, so we’re able to keep a good pace.”

Monster Yamaha Tech3 team riders Pol Espargaro and Bradley Smith completed the final preseason run out today with encouraging performances which leave them confident for the approaching first race of the 2016 MotoGP World Championship in Qatar.

Pol Espargaro brought his test campaign to a positive close as he carried on his thorough work with the electronics as well as the Michelin tyres. In addition, the Spaniard was also one of the few riders to undertake a full race simulation today and ultimately, he cut 0.865 from his fastest lap from day one, which was just over half a second from 2nd overall. Meanwhile, Bradley Smith dug deep as he completed a mammoth 62 laps, whilst continuing in making alterations to his Yamaha YZR-M1. The end result saw the confident Briton finish just 0.084 behind his teammate, leaving him optimistic of his ambitions to complete the opening Grand Prix inside the top 8.

“I am really satisfied with what we achieved today, even though of course, there is still margin of improvement that we can make. After the issues that we had in Malaysia where we didn’t know which direction to head towards and where we were struggling with the electronics, I wasn’t really optimistic. In Phillip Island we were able to improve and I ended the test in the top ten which is very important because it is where we need to be. Here, we were still not particularly strong on a single lap, but the most important thing is that I was one of the few riders who ran a race simulation and our rhythm was very strong. We were also able to finalise our tyre choice and the tyre that I used was good. In fact, we rode 2 laps more than race distance. The only inconvenience of the simulation was the interruption because of the red flag. However, when I pitted, we didn’t touch the bike at all and when I went out again, I was able to improve my time. Actually, I rode my fastest lap after having covered the full distance, which is something that I was never able to do with Bridgestone tyres, but with Michelin, I can. Therefore, I feel very comfortable and I am excited to start the season here in Qatar. Honestly, I expect the qualifying to be tricky for us, but on Sunday I am sure we will be able to do great things.”

“We closed the test positively today, but all in all the pre season 2016 has been quite different compared to other years. It’s been an interesting process where we’ve had to get used to the new tyres, as well as to judge their evolution because we’ve had some different front and rear tyre specs to evaluate. I must say that learning to adapt the bike to these different compounds has been a challenge. Some parts of the pre season have also been frustrating for me because of the time the weather took from us in Australia, and also the tyre situation a bit here in Qatar and as a result, we weren’t able to extract the maximum from the available testing time. Nevertheless, we are within touching distance of our target, which I think will be inside the top 8 this year. I still believe that we have a bike that’s only at 90% so there’s room to improve and we are always getting closer. Yet, going into the start of the season, I’m confident that we can do a good job. This evening’s test was positive as I improved my time quite a lot and we had consistent pace. Also, I was able to go out and ride quickly immediately which is something that I was struggling with on these tyres but I figured that one out today. I’m excited to complete the testing and finally get into racing mode as the competition brings out a bit of extra pressure which some people like and some don’t. For me, I like to be put under pressure and I feel I perform better in that way, so roll on the start of the season and FP1 in a few weeks’ time.”