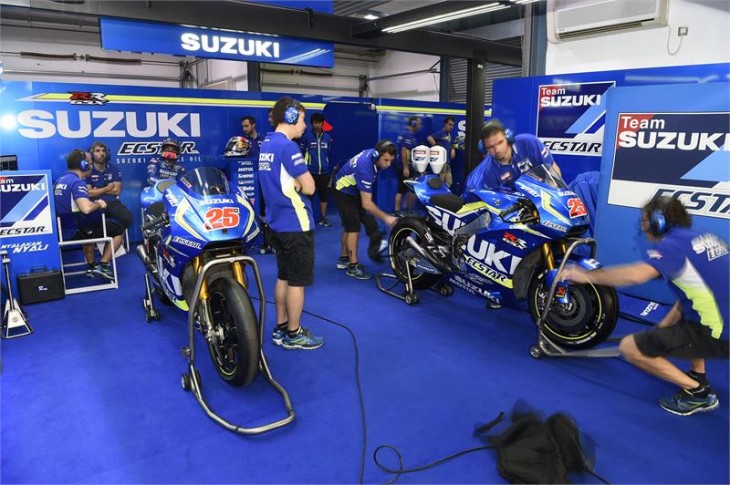 Team Suzuki Press Office – March 3.  The second day of MotoGP™ testing in Qatar was another step forward for Team SUZUKI ECSTAR’s Maverick Viñales, who topped the classification with a best-time of 1’55.436 in his 28th out of 42 laps around the Losail circuit.

The young Spaniard has been working very hard to finalise the preparation of his GSX-RR, with a step-by-step approach, which has allowed him to stay consistently within the fastest riders.

Today he continued the work on the set-up and the electronics, leaving the test of the new ‘up-and-down’ seamless gearbox until tomorrow, but today’s time is already 0.444s faster than his best of yesterday and nearly two-tenths-of-a-second closer to his qualifying time of last year’s debut race.

Other positives from tonight for Team SUZUKI ECSTAR were also confirmed by the performance of Aleix Espargaró, who finally regained some feeling with his GSX-RR and began the improvement process that allowed him to perform better. His 1’56.126-lap-time sets him in the 10th place in the classification, but most of the job was done to find a proper setting and work towards the pace as he also focused in the development work of the up-and-down seamless gearbox.

After yesterday’s final test with Suzuki Test Team rider Takuya Tsuda, the new gearbox was installed on the #41 GSX-RR, with the experienced Spaniard to have a first taste of it to give further feedback to the Suzuki engineers.

“Of course it’s nice to be on the top, although we keep our feet on the ground being aware that we are only in a test, but the other positive is that both riders could improve and find a better and better feeling. With Maverick, we are consistently in the top positions, and today he continued to do a good job. Also, Aleix worked positively and registered some progress, which makes us very happy. He found better settings and therefore a better feeling. Tomorrow we will try to improve this final phase of preparation for the Championship and, at this point, we are curious to see how the first races will go.”

“This was another positive day, not only for the fastest lap but also for the huge job we have done. The step-by-step approach is paying back and my lap-times are good also in terms of pace. Although we worked hard to prepare for the races, I scored the best time and this gives us very good hopes. I’m still working to decide the chassis, we’re still trying both the 2015 and 2016, because we still have issues to verify and room for improvement. The positive is that although my best lap came with the 2015 chassis, the lap times are very close between the old one and the new one, leaving us with many options. As I said, I focused to prepare for the race, so today there was not time to try the new seamless gearbox, as we want to check things within all our configurations. Tomorrow may be the right chance to test it, even though we have also planned a race simulation to verify our consistency on the long distance. For now I’m positive, the leading position is a good feeling although I’m aware there is still a lot to do.”

“Finally today was a positive one for me, probably the best day in the whole testing sessions. I can’t say I’m happy, but I definitely feel satisfied. I found a good feeling with my bike and improved the lap times. Although I’m not in a good position in the classification, the work we have done on the consistency is very positive and I feel my pace is pretty good. We still have some issues with my confidence with the front; I’m a very aggressive rider and I like to feel totally comfortable in entering the corners… that was something I had last year and now we must find back. Today we changed a lot the geometry of my machine and this proved to be a major step forward. I also had the chance to test the new full seamless gearbox: The feeling is very positive because the bike is more stable and I don’t lose RPM’s in shifting, but it is still an ‘early’ version and we need to work to finalise its configuration. For sure it is a good step forward and we have much room for improvement. My back hurts a little, but the positive of today gives me a further impulse for tomorrow, but we need to find better efficiency on the time attack and also need a race simulation in order to confirm the good feeling I have about the pace.”