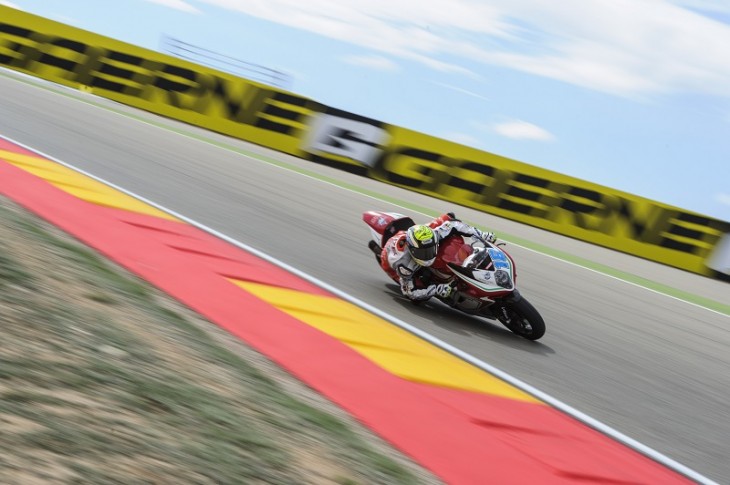 After the exiting races in Australia and Thailand, FIM Superbike World Championship makes its returns in Europe and MotorLand Aragon, in Spain, is the venue for the opening European race of this season.

In the premier class Leon Camier immediately got a positive feeling with his bike’s setup and thanks to a best lap time of 1’51.568 the British qualified in 8th position, only 0.023s from the american champion Nicky Hayden. Tomorrow Leon Camier is going to fight in Tissot-Superpole 2 for the top position on grid and shortly after he will be back on track again for Race1.

In WorldSSP Jules Cluzel and team MV Agusta Reparto Corse have dominated both the qualifying sessions. With a solid feeling with his MV Agusta F3 675 the French rider was the only one to post a lap time under 1’56s in FP1, reinforcing his leadership also in FP2.

Good performance for Cluzel’s teammate Lorenzo Zanetti, placing 3rd in this qualifying day and leaving behind the difficult Thai round. Tomorrow both riders will take part to the Tissot-Superpole 2, scheduled at 11.55 local time.

Leon Camier #2 – I am quite happy with the time we did this afternoon. I think we need to make some changes for tomorrow and make a good strategy for the race because the weather is quite unstable. Anyway, as I said it was a good start and I am really happy with the bike. Finger crossed tomorrow since we can improve again.

Jules Cluzel #16 – It has been a very positive day and since this morning we have pushed really hard and I managed to be on top both in FP1 and FP2. This afternoon we had a few problems but in the end we realized it was just a problem with the tyre. Now, it is a must for us to get ready for Sunday’s race and I am really confident we are moving on the right direction.

Lorenzo Zanetti #87 – I am definitely happier than I was in Thailand. Let’s point out how it was important to me to be immediately back to my actual level. We did a new start with this round and I think we are very competitive now. Our goal was to enter the Superpole 2 with a good lap time, in order to fight for the top position on grid tomorrow. Thanks to my whole team because we really did a great job today.