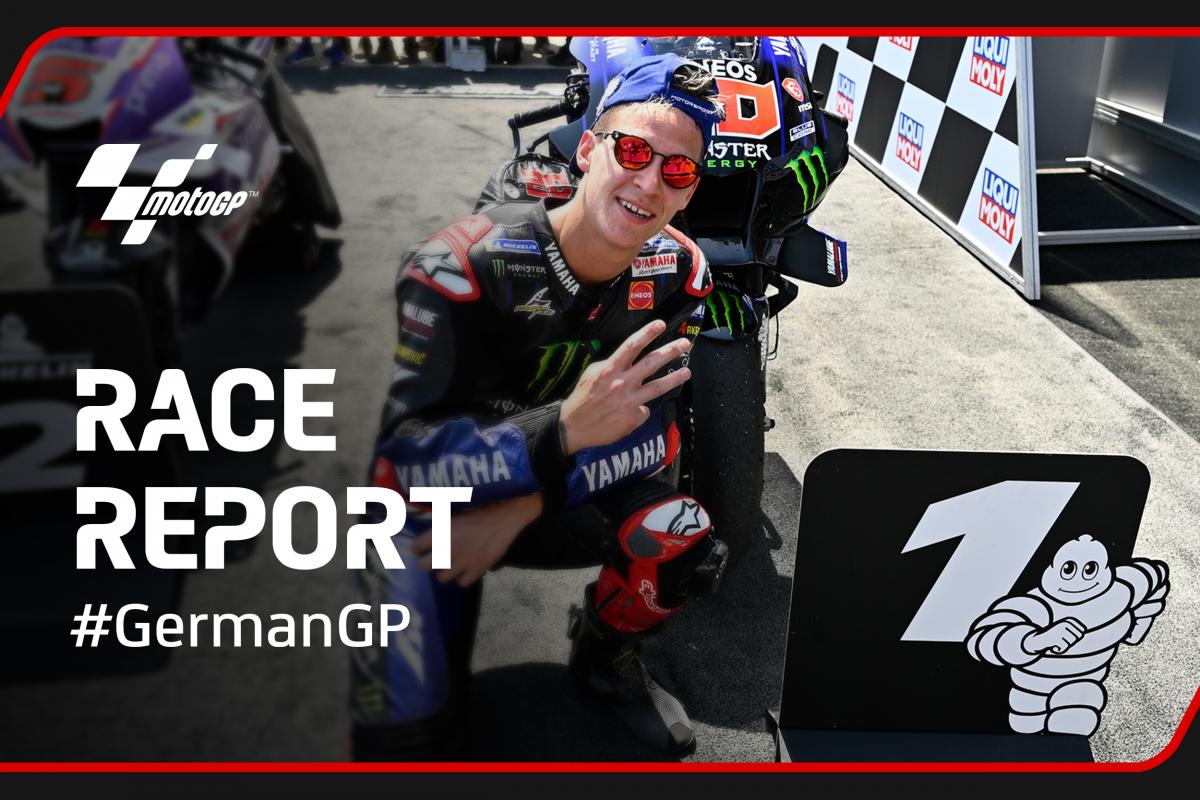 Fabio Quartararo has won a Liqui Moly Motorrad Grand Prix Deutschland which could well be looked back as a crucial race in the 2022 MotoGP™ World Championship title fight. The Monster Energy Yamaha MotoGP™ rider not only scored consecutive victories for the first time this year but is now 34 points clear at the top of the standings. Aprilia Racing’s Aleix Espargaro remains second in the title race after finishing fourth at the Sachsenring but the Ducati Lenovo Team’s Francesco Bagnaia has a mountain to climb after he crashed out while chasing Quartararo on Lap 4.

From that point on, Quartararo asserted himself in a dominant display to win by almost five seconds after 30 laps, with Prima Pramac Racing’s Johann Zarco finishing a lonely second. There was some solace for the Ducati Lenovo Team in the form of Jack Miller, who fought back from a Long Lap penalty to earn the final place on the podium, while the Mooney VR46 Racing Team’s Luca Marini grabbed fifth on another Desmosedici.

Bagnaia had sensationally qualified on pole on Saturday afternoon but, as is so often the case, Quartararo was not going to allow a key rival to catch an early break. ‘El Diablo’ was late on the stoppers when they arrived at the first corner of the race and nabbed the early lead, as Aleix Espargaro took up third, ahead of Zarco, Fabio Di Giannantonio (Gresini Racing MotoGP™), and Miller. Bagnaia then overtook Quartararo at the start of the second lap but the Frenchman was not having it, forcing his way back down the inside of the Ducati as they exited Turn 1.

The manoeuvre left Pecco having to chase, but his pursuit ended just two laps later when he lost the rear of his Desmosedici as he tried to round Turn 1 again. The crash gave Quartararo a free kick in the context of the World Championship, and a clear, one-second lead over second place in the Grand Prix, which had been inherited by Zarco after he had squeezed past Aleix Espargaro on Lap 2. There was more change in the order on Lap 5 when Miller served his Long Lap for a Free Practice crash under yellow flags, and he was nearly down again due to the gravel left in the penalty loop. He dropped to seventh on the timing screen but soon reclaimed sixth spot from Jorge Martin (Prima Pramac Racing).

By then, Maverick Viñales had made his way up the order to be running just a position behind third-placed Aprilia team-mate Aleix Espargaro, and starting to apply the pressure. However, Miller cleared Di Giannantonio on Lap 12 and that released him to go after both of the RS-GPs. He looked like becoming a handful for Viñales but ‘Top Gun’ soon had bigger issues when his rear ride height device got stuck on, and he would retire from the race.

After little more than 20 laps, Quartararo, who had made the bold choice of a medium compound Michelin rear tyre when hard was the far more popular option given the hot conditions, had stretched his margin over Zarco to more than three seconds. His fellow Frenchman enjoyed a similar gap over Aleix Espargaro, but Aprilia’s ‘Captain’ was coming under serious attention from Miller. ‘Jackass’ fired his Ducati down the inside of #41 at Turn 1 on Lap 23 but ran it in too deep and could not make the move stick, and the result was the same when he tried again on Lap 26. Ironically, Espargaro himself went wide through there on Lap 28 and Miller marched through a big hole, into third position.

Quartararo got more than five seconds ahead of the rest of the field in the last handful of laps before cruising to victory by an official margin of 4.939 seconds. Zarco took the chequered flag 3.433 seconds up on Miller, with Aleix Espargaro a few tenths further back as he battled for rear grip in the closing stages. Marini prevailed in a battle with Martin as they finished fifth and sixth respectively, while Brad Binder (Red Bull KTM factory Racing) demonstrated once again that he is the quintessential ‘Sunday man’ by riding up from 15th on the grid to seventh.

How the rest fared

A further five riders joined Bagnaia and Viñales as DNFs. Pol Espargaro (Repsol Honda Team) retired due to rib pain from a crash in Free Practice and Alex Marquez (LCR Honda Castrol) also had a rear ride height device failure, specifically that it would not disengage after the start. His team-mate Takaaki Nakagami (LCR Honda Idemitsu) crashed out, as did Darryn Binder (WithU Yamaha RNF MotoGP™ Team) and Joan Mir (Suzuki Ecstar). The latter did so at Turn 1, moments after Bagnaia had gone down there, having been held wide when Oliveira went to overtake him.

In the World Championship, Quartararo is not only a race clear of Aleix Espargaro but more than two (61 points, to be precise) up on Zarco. Bagnaia has dropped to sixth on the table, a full 91 points off the pace, to be in a tie with Ducati team-mate Miller.

Now, we head to the ‘Cathedral’ for the last round before the summer break. Make sure you do not miss the Motul TT Assen on June 24-26!