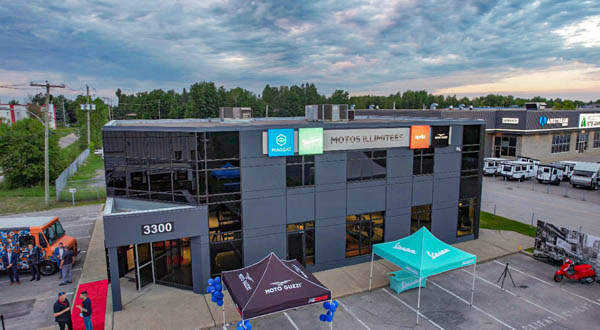 A Piaggio flagship store has come to Canada.

The majority of motorcycle dealerships in Canada are not single line. There really big ones often carry more than five separate brands. There are the exception, the most prevalent being Harley-Davidson, which historically has preferred there dealerships to be devoted only to the mother brand. But even in the case of Harley-Davidson, there have been changes to the model. Owners, particularly those coming from the auto business have bought up any number of dealership to achieve the benefits of scale. Barnes Garage Company owns four Harley-Davidson dealerships in British Columbia and Alberta and has recently added a multilingual dealership that sells Honda, KTM and Yamaha brans among others. Elsewhere dealers have bought other dealers looking for those slim advantages that help the bottom line.

Looking back on destination single line flagships dealerships, one has to consider the experience of the the Honda Powerhouse concept from the early 2000s. It didn’t work out as planned.

But the Piaggio Group has success in mind when announcing that the company had partnered with Moto Illimitees to open a Piaggio flagship dealership in Quebec.The dealership located in Terrebonne outside Montreal, will be home to all four of Piaggio’s two wheeled brands – Piaggio scooters, Vespa scooters and Aprilia and Moto Guzzi motorcycles. It will be that variety that covers everything from 50cc scooters to super sport bikes to Moto Guzzi’s V85 ADV bike and retro offerings that will be the linchpin for success . If Moto Guzzi was still selling their big cruisers (excellent bikes by the way) the dealership would cover the motorcycle spectrum. 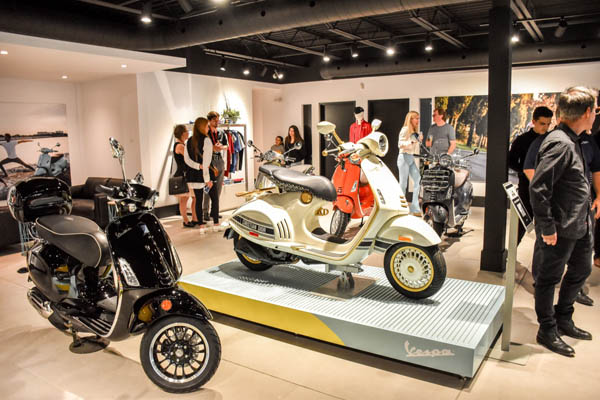 The true success likely relies on the scooter side of the business as Quebec is far and away the scooter capital of Canada as more scooters are sold in the province than in the rest of Canada combined. Selling Vespa’s in that market is going to pay dividends. While scooters sales in other jurisdictions may rise – especially considering gas prices – Quebec might be the only location in Canada where Piaggio flagship concept could prove fertile.

Flagship Stores Around the World

Piaggio states that there are many dealership such as this one around the world and they add Montreal’s Piaggio flagship to the likes of those in London, Berlin and Buenos Aires.

“The extension of this retail flagship concept for Piaggio Group has been a critical element to our global retail vision. The right retail environment to showcase our brands is a top priority, and with Motos Illimitees, we have partnered with the right dealership, to support one of the most passionate two-wheeled markets in the Americas, in Montreal. We are pleased to welcome this flagship into our network, and are happy to see the success they are already generating with the Piaggio brands.” 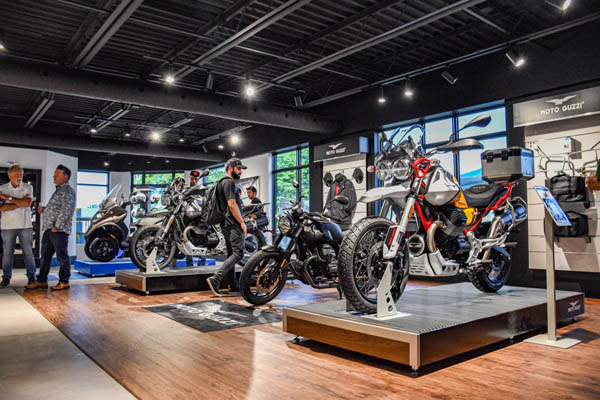 There is a small caveat to the Moto Illimitees Piaggio flagship story and that is the location of the company’s enormous dealership that sells nine brands of motorcycles and a variety of other recreational vehicles. The big box store is just across the parking lot next door. Moto Illimitees also has a Ducati dealership.