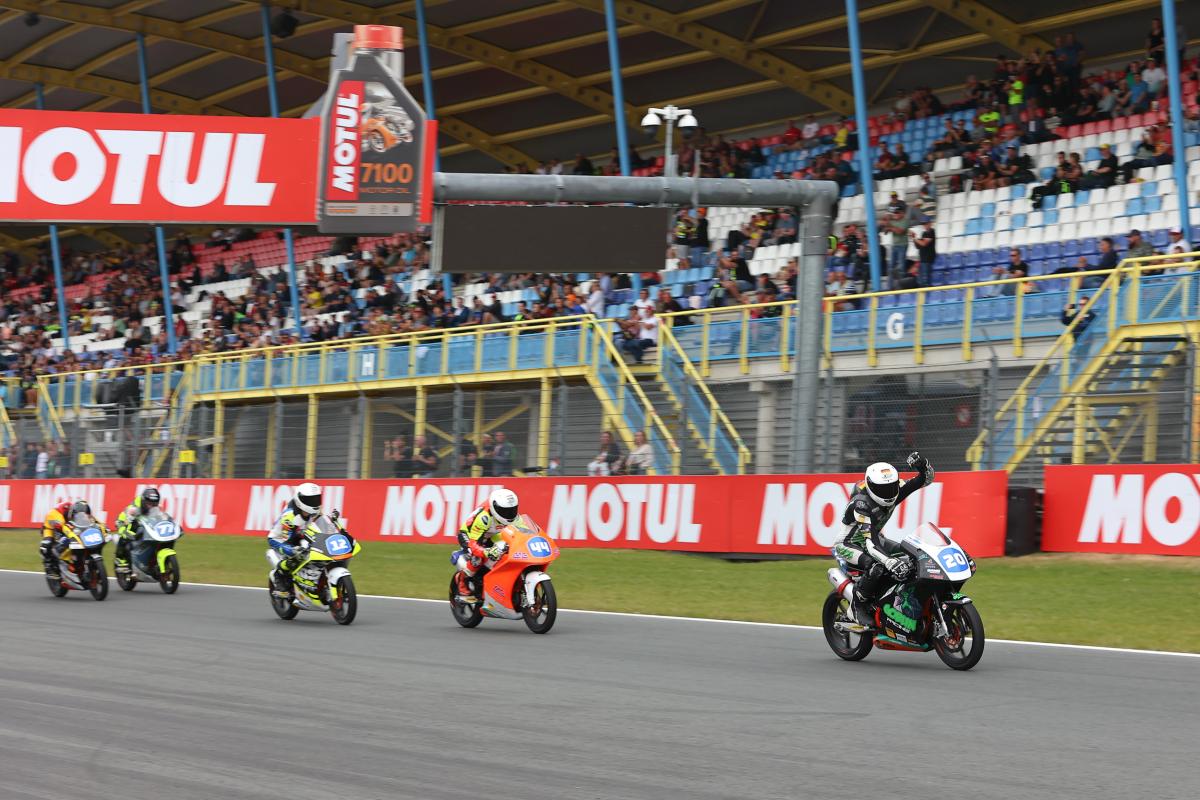 Rossi Moor (Farium Next Generation Riders) claimed a fourth victory of the season to extend his advantage at the top of the 2022 Northern Talent Cup standings in a scintillating Race 1 at the TT Circuit Assen. A late move on title rival Kevin Farkas (Agria Racing Team) saw Moor keep up his 100% podium tally this season, with Farkas picking up P2 ahead of fellow Hungarian – and debut rostrum finisher – Tibor Varga (Forty Racing).

It was the first time this season that Moor hadn’t started from the front row and despite not getting the best of launches, it wasn’t long before the impressive Hungarian found his way to the front. The lead was changing constantly though with home hero Loris Veneman (Team NL Open Line) carving his way to P1, but his race ended with a highside on the exit of Turn 1. Thankfully, Veneman was uninjured in the early crash.

From there on, it was a fascinating battle. Moor, Farkas, Varga, polesitter Jurien van Crugten (BB64 Academy) and Dustin Schneider (Goblin Racing) all took turns at leading, with slipstream being used to great effect on the front straight, back straight and the winding ribbon of fast kinks that take us to the final chicane. Heading into the closing stages, Schneider was hit with a Long Lap penalty for exceeding track limits as the fight for victory raged. Farkas took the lead on the last lap but at Turn 15, the final left hander before the Geert Timmer Chicane, Moor pounced. The latter made no mistake at the final corner to win again, while Farkas did well to hold onto P2.

Varga’s debut podium was richly deserved as Lenoxx Phommara (Team Phommara) narrowly missed out on a third rostrum of the season in P4. The Swiss rider crossed the line fifth but benefitted from van Crugten’s penalty for exceeding track limits on the final lap – the Dutch rider was demoted to P5. Martin Vincze (Chrobak Motorsport Egyesület) finished P6 from P12 on the grid, with Schneider doing well to recover to P7 ahead of Noa Cuypers (Junior Black Knights) and Matteo Masili (Farium Next Generation Riders) – the top nine covered by just over a second. Luca Göttlicher (JRP Junior Academy Team) rounded out the top 10.

Dustin Schneider (Goblin Racing) is a Northern Talent Cup winner after coming out on top of another thriller at the TT Circuit Assen, as a last lap fight for victory saw Rossi Moor (Farium Next Generation Riders) crash unhurt at Turn 15 – the same corner he won Race 1 at 24 hours prior. Tibor Varga (Forty Racing) claimed P2 for his second podium of the weekend, as Martin Vincze (Chrobak Motorsport Egyesület) climbed onto the box for the first time this season.

Home heroes Jurrien van Crugten (BB64 Academy) and Loris Veneman (Team NL Open Line) started from pole and P2 once again and just as we saw in Race 1, we were treated to an absolute stunner. Moor took no take in taking the lead from P4 on the grid, but the lead was changing lap after lap in Assen, no one able to break clear of the slipstream.
Heading into the closing stages, the top 12 riders were split by little over a second. It was as close as it could possibly be but Moor, at the beginning of the final lap, had a bit of breathing space. 0.6s was the Hungarian’s advantage but that was soon gone. The run out of Turn 11 all the way through to the Geert Timmer Chicane was where it came down to, as drama unfolded. Moor was on the outside line as both Schneider and Varga slipped up the inside. Moor touched the curb on the outside of Turn 15, and this caused the number 92 to crash out of contention. Thankfully the title leader was perfectly alright as we saw Schneider negotiate the final chicane and cross the line as a winner in the NTC for the first time, the German leading home Varga and Vincze.

Lenoxx Phommara (Team Phommara) finished fourth for the second time this weekend, 0.3s from the win, as Veneman bounced back from his Race 1 disappointment to claim P5 on home turf. Sixth went to van Crugten, as Valentino Herrlich (Busch und Wagner Racing Team), Matteo Masili (Farium Next Generation Riders), second in the Cup Kevin Farkas (Agria Racing Team) and Noa Cuypers (Junior Black Knights) completed the top 10.
Next up for the NTC riders and teams is a trip to the Czech Republic at the end of July, as they join the WorldSBK paddock in Most for Round 5 of the season.