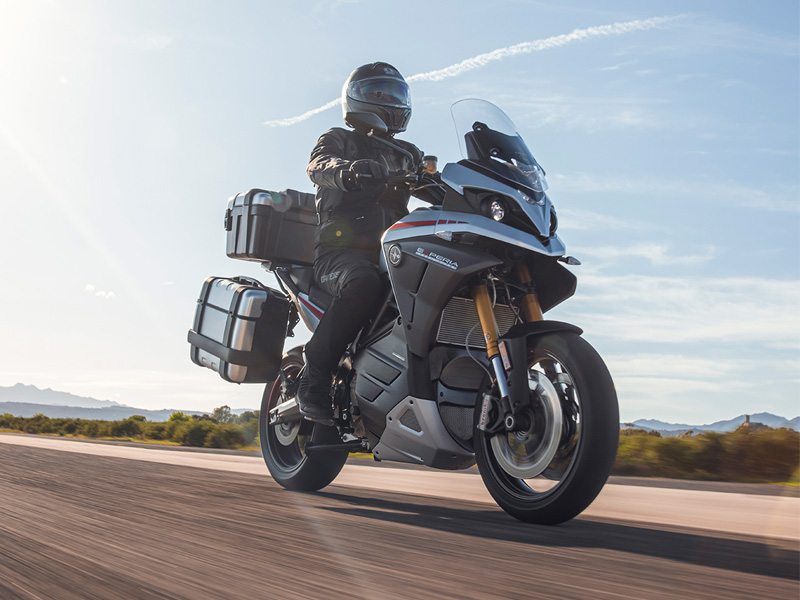 It is a beautiful bike. Little doubt about that. Italian and looks a little like a Ducati Multistrada and if it was splashed with gloss red paint and seen from across the parking lot, it could be mistaken for one. The bike is also spec’d out well: Brembo brakes, Sachs suspension.The Energica Experia is the Italian motorcycle builder’s entry into the touring segment which is why the Experia comes with a set of hard bags, a tall windscreen and comfortable ergonomics. What you may not glean if the segment does not fire you up is the Experia is an electric motorcycle. Energica has been one of the leading independent electric manufacturers for quite some time and produced the race bike for the MotoGP e races until that job was recently taken by Ducati.

While touring and electric motorcycles don’t yet seem to go together Energica is putting thier best wheel forward for this effort. The battery is the largest you can get in an electric motorcycle – the equivalent of the thirty-plus litre tanks you find in the big touring ADV bikes pushing ranges up and over the 500km mark. The electric motor is also new.

As for range. According the the company, the Energica Experia manages 420km on a charge – in the city. Combined highway cit is 256km. Blasting the backroads the range drops to 208 kms. To allow that kind of range the  highway blasting is going to be at a speed of less than the limited 180kph top speed of the bike.

While Energica has dealers across the US, there are no dealers listed in Canada.