Can-Am just announced that there will be new electric motorcycles in the company’s stable but this item from issue #345 of the magazine (back in September 2019) shows that there is far more under development. 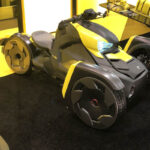 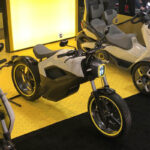 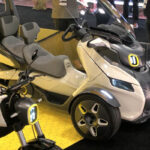 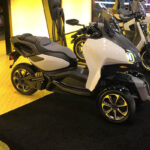 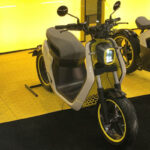 BRP puts its intentions on full display with the Vegas unveiling of six concepts.

During the month of September 2019  at an event in Las Vegas BRP showcased six different electric concepts that gave a glimpse of what the future could hold, for both of its current product lines and for other potential segments.

“BRP has been working for some time on how to create e-vehicles to bring new experiences to potential and existing riders,” said Denys Lapointe, BRP senior vice-president, Design, Innovation and Creative Services. “As we’ve said, it was never a question of if, but when. We are truly excited about electric and see it as a potential opportunity for our business. Our talented team from around the world is working on new ideas and we’re eager to hear the consumer’s reaction. For the moment, these are preliminary concepts as we are currently evaluating market viability.”

While actual crunchy details were sparse, the prototype models include an electric motorcycle, a trio of three-wheelers, one scooter, and a personal watercraft to round out the number of concepts on display. These concepts take inspiration from and follow a series of past ventures by BRP into electric propulsion such as the Ryker EV based on the current Cam-Am Ryker.

The post BRP’s Electric Future (From Before) appeared first on Canadian Biker Magazine.