RACE 1: Farkas flies to first win of the weekend

Kevin Farkas (Agria Racing Team) came into Assen with the momentum and in Race 1, the number 28 only hammered that home. Disappearing at the front for another impressive win, he did what he needed to as points leader Rossi Moor (Fairium Next Generation Riders) had been homing in on match point. But with Jurrien van Crugten (BB64 Academy) taking an impressive and comfortable second, his first NTC podium, and Valentino Herrlich (Busch und Wagner Racing Team) charging back to overcome two Long Laps and take third, Moor was ultimately demoted to fourth as Farkas cut the 31-point gap by a considerable margin on Saturday.

From the off, Farkas was off and the Hungarian had only van Crugten and Herrlich for real company. Herrlich then took one Long Lap – a double given for speeding in pit lane – and dropped back into the freight train behind, fighting back towards the front and then taking the second to face the challenge down all over again. But that he did. 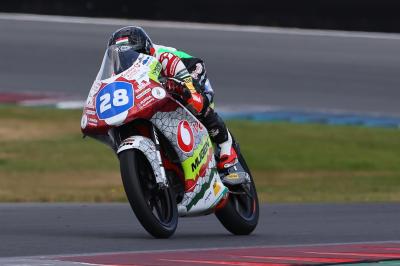 As Farkas crossed the line with some good breathing space of more than five seconds, van Crugten stayed calm to take a home turf podium and the fight behind went right to the wire. Despite his penalties, Herrlich put in a stunning finish to secure third place, beating Moor by just a tenth at the flag.

Loris Veneman (TeamNL Open Line) was a similar distance back in P5 on home turf, with Lenoxx Phommara (Team Phommara) for even closer company in sixth. Dustin Schneider (Goblin Racing) kept the tiny gaps coming as he took P7, just 0.070 ahead of Martin Vincze (Chrobak Motorsport Egyesület) who kept his consistent form going.

Tibor Varga (Forty Racing) beat Julius Coenen (Helena and Julius Racing) and Maxime Schmid (Schmid Racing) to ninth, the three the last of the bigger group fighting to decide the top five and 10.

RACE 2: Farkas cuts the gap to 14 points with another stunner on Sunday

After Most Race 2 and then Assen Race 1, Kevin Farkas made it a triple threat as he once again laid down the gauntlet on Sunday in the Netherlands. The Hungarian was over eight seconds clear by the flag, with points leader Rossi Moor coming home second but seeing his advantage cut to just 14 points. After some tougher times on home turf thus far in the NTC, Loris Venemantook third and stood on the podium at the Cathedral.

As is becoming his calling card, Farkas went full gas from the off to immediately take the lead and start building that further. This time the number 28 had no company to speak of almost from the off, putting the hammer down as his mission to defeat Moor for the 2022 Cup continued in style.

Behind, it was another huge group battle and, as ever in the NTC, it went to the wire. Herrlich started the final lap in second but it was chopping and changing to the flag – and both he and Lenoxx Phommara were victim to a late attack from Moor. The number 92 got past Dustin Schneider to set up a grandstand finish and make it past both riders ahead of him for second, through the Geert Timmer chicane with just enough in hand.

Veneman stayed ahead for third, with Phommara off the podium by just 0.034. Schneider beat compatriot Herrlich just behind, with Martin Vincze within another 0.019.

Jurrien van Crugten came away with P8 in Race 2, just ahead of Maxime Schmid (Team Schmid) in ninth. Tibor Varga (Forty Racing) beat Julius Coenen (Helena and Julius Racing) once again on Sunday, this time in a private duel for tenth place.

The Northern Talent Cup field now heads back to the Red Bull Ring for the season finale, with the 2022 winner waiting to be crowned. Will it be Moor, or can Farkas continue his roll? The number 28 has some serious form in Austria. Join us for the 2022 decider alongside IDM from the 2nd to the 4th of September in Styria, with just 14 points separating the two riders at the top and the final 50 on the table.