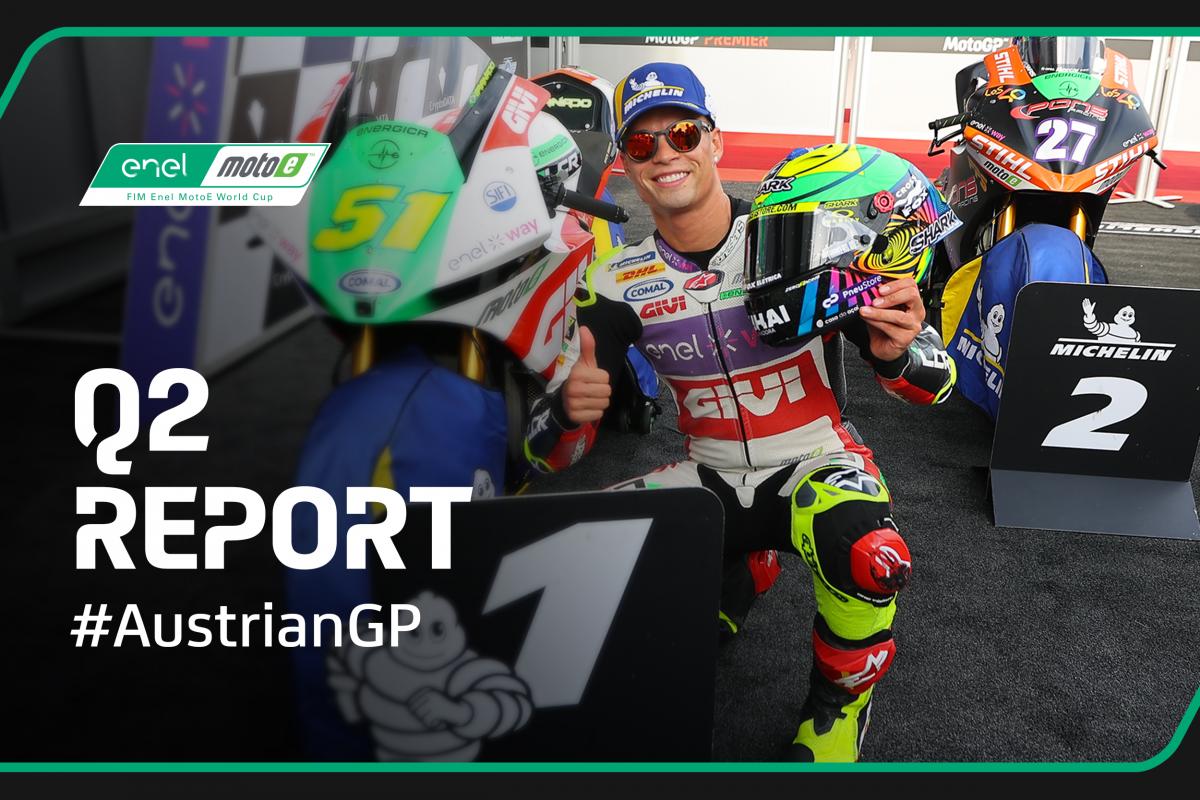 The FIM Enel MotoE™ World Cup has resumed after its summer break and Eric Granado has secured a much-needed first pole position of the season at the CryptoDATA Motorrad Grand Prix von Österreich. The LCR E-Team rider is second in the standings, with just two rounds left to try and overtake Dominique Aegerter (Dynavolt Intact GP MotoE™), and the 1:41.390 which he set in Q2 at the Red Bull Ring – Spielberg gives him the best possible chance of doing so. Joining Granado on the front row will be Mattia Casadei (Pons Racing 40) and Matteo Ferrari (Felo Gresini MotoE™), while Aegerter is set to get away from fifth position in both of this weekend’s races.

After a mixed morning of weather in Spielberg, sunny conditions greeted the MotoE™ field for qualifying on Friday afternoon. Granado kicked off Q2 with a 1:42.024 which was quickest at that point, and consolidated provisional pole with a 1:41.390 next time through. Casadei set a 1:41.530 on his second flyer to be second-fastest, but neither of those two could relax.

Ferrari was continuing to improve and gradually got his time down to a 1:41.569 with a handful of minutes remaining in the decisive stanza, to be third when the chequered flag came out. A host of riders then set quick sectors in a final bid for pole position, but there would be no further changes to the front row.

Row 2, on the other hand, was firmly still in play. Kevin Zannoni (Ongetta SIC58 Squadracorse) had only got himself out of Q1 with a very late effort to top that session, and did something similar at the end of Q2 when he vaulted himself from eighth to fourth with a 1:41.596. It was also a significant lap in the context of the title race, considering it pushed World Cup leader Aegerter back to fifth position, the Swiss rider having gone as good as a 1:41.642. Joining them on the second row of the grid will be Niccolo Canepa, who rode his WithU GRT RNF MotoE™ Team entry to a 1:42.029.

How the rest of the grid looks

Xavi Cardelus (Avintia Esponsorama Racing) was second-quickest out of Q1 and would ultimately claim seventh on the starting grid, ahead of Miquel Pons (LCR E-Team), Alex Escrig (Tech3 E-Racing), and Hector Garzo (Tech3 E-Racing). Jordi Torres (Pons Racing 40) was a surprise omission from the top 10 having missed the cut by 0.059 seconds in Q1 and will line up on the middle of Row 4, between Garzo and Hikari Okubo (Avant Ajo MotoE™). Bradley Smith (WithU GRT RNF MotoE™ Team) qualified 16th while Alessio Finello (Felo Gresini MotoE™) has been declared unfit after suffering a fractured metatarsal on his right foot when he crashed in FP1, meaning he will take no further part in the weekend.

With the top four in the FIM Enel MotoE™ World Cup standings all qualifying in the top five in Austria, the stage is set for another battle royale in the electric class. Catch Race 1 Race 1 on Saturday afternoon from 16:25 (GMT +2)!