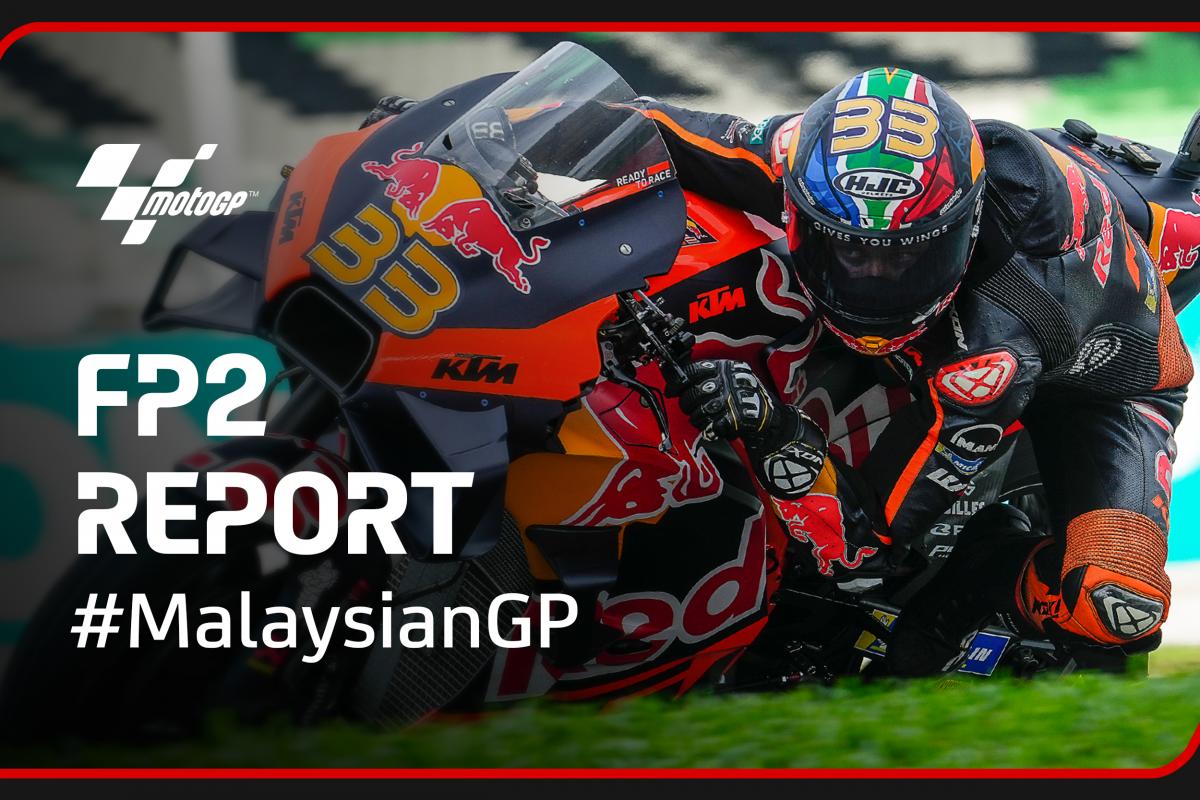 Red Bull KTM Factory Racing’s Brad Binder has taken Friday honours at the PETRONAS Grand Prix of Malaysia. On a day of mixed weather, it was Cal Crutchlow (WithU Yamaha RND MotoGP™ Team) who set the quickest lap in a damp MotoGP™ FP2 session at the Sepang International Circuit after a late change to slick Michelin tyres. However, his afternoon benchmark of 2:05.710 was several seconds away from the 1:59.576 which Binder achieved earlier in the day, when the circuit was completely dry. On a weekend when Francesco Bagnaia (Ducati Lenovo Team) has his first Match Point, he is currently outside the Q2 places after missing the top 10 by just 0.003 seconds in FP1.

A huge downpour caused a lengthy red flag period in the preceding session of the event, Moto2™ FP2, but the sun was shining by the time the premier class rolled out for their second session of the day. All 24 riders started on wet Michelin tyres but there was precious little spray being kicked up by then, as Franco Morbidelli set the early pace despite an excursion through the Turn 9 gravel trap. After lap times started in the 2:15s and beyond, the Monster Energy Yamaha MotoGP™ pilot got down to a 2:11.734 before Prima Pramac Racing’s Johann Zarco took over P1 for a sustained period of time.

The Frenchman had set a fastest lap of 2:10.807 before Crutchlow, Miguel Oliveira (Red Bull KTM Factory Racing), and Marc Marquez (Repsol Honda Team) all moved the marker. Morbidelli then reclaimed the ascendancy with a 2:09.390 but he was still on wets at a time when some had switched to slicks for the final five minutes of the session. Would fortune favour the brave?

Slicks prevail in the end

The answer was yes. Alex Marquez (LCR Honda Castrol) jumped from 15th to first by setting a 2:08.644 with a medium Michelin slick on the front and a soft slick on the rear, before a fully medium-shod Crutchlow set a 2:08.436 just before the chequered flag came out. Zarco briefly rebounded to second position with a 2:08.589 on wets but he would be shuffled back to fifth all-told. Alex Marquez got down further to a 2:06.896 but Crutchlow bettered that with a 2:05.710 and then they were split by Bagnaia’s 2:06.610 right at the end.

It meant a top four for FP2 of Crutchlow, Bagnaia, Alex Marquez, and Jack Miller (Ducati Lenovo Team) on a 2:07.553, with Zarco first of those who finished on wets in fifth outright, and Fabio Quartararo (Monster Energy Yamaha MotoGP™) ninth after he had an off at Turn 7/Turn 8. However, given FP1 was dry, the combined timesheet matches the classification from that earlier session, when Brad Binder set a 1:59.479 on his final lap of the morning and last-start winner Alex Rins (Team Suzuki Ecstar) made a late moved to be classified P2 on a 1:59.576, ahead of Marc Marquez, Enea Bastianini (Gresini Racing MotoGP™), and Joan Mir (Team Suzuki Ecstar).

Nervous times for the Championship contenders

In that earlier session of the day, neither Quartararo nor Bagnaia fitted new Michelin tyres for their final runs, and they would be classified seventh and 11th respectively on a 2:00.543 and a 2:00.770. It sets up a high-stakes FP3 session for both of the key riders in the title fight given Pecco is currently an agonising 0.003 seconds outside the combined Free Practice top 10 and Quartararo is far from safe either. Also with work to do is the third of the title contenders, Aleix Espargaro (Aprilia Racing), who was classified 20th in FP1 after a crash on one bike and a technical problem for the other. The man from Granollers then claimed 21st in FP2.

With no true form guide yet, a fascinating FP3 session awaits. Catch all the action on Saturday from 10:50 (GMT +8)!